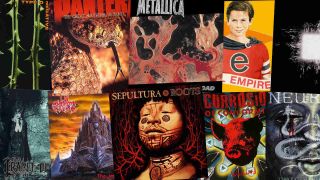 Metal had seen off grunge and found its feet again by the second half of the 1990s. Yet aside from big guns Metallica, who released the divisive Load, this was a time when a new generation were mapping out the genre’s future on both sides of the Atlantic, from Rage Against The Machine and Tool to In Flames and Cradle Of Filth. These are the 10 albums that soundtracked that pivotal year.

Cradle Of Filth - Dusk… And Her Embrace

The pinnacle of Cradle Of Filth’s ‘green period’ – as Dani has called it – Dusk… is a masterclass in extreme metal and, to most, the defining Filth record. Epics such as Heaven Torn Asunder and A Gothic Romance (Red Roses For The Devil’s Whore) are inspired by Sisters Of Mercy as much as they are Emperor, taking the ugly face of black metal and spurting a garishly gothic seed all over it.

Creepy keyboards and warbling female vocals are one of the record’s focal points, but the sheer strength of the riffs which encase them is unquestionable. The title track and Funeral In Carpathia both boast melodious leads and harmonies that would make Iron Maiden weep; the latter also packs Sarah Jezebel Deva’s immortal cry of ‘Never leave me!’ and stakes its claim for the best Cradle song ever.

Put simply, Dusk… And Her Embrace is a masterpiece. Everything from Dani’s yearning, Byronic lyrics to the expansive production values; from Nicholas Barker’s infernal drumming to Venom’s Cronos popping up on album closer Haunted Shores just reeks of ambition, and most bands in this situation would crumble like biscuits under the feet of Stormtroopers. Not Cradle Of Filth.

The story of Corrosion Of Conformity is almost certainly unique in metal, primarily because they have changed heavy music irrevocably on at least two separate occasions. This album marked the culmination of their journey from hardcore snarlers to Southern-rock-infused metallers.

With Pepper Keenan installed as frontman, 1994’s Deliverance and its 1996 follow-up Wiseblood established COC as leading lights in the then-flourishing stoner rock and doom scenes, re-injecting some much-needed Iommi-saluting heft into mainstream metal.

In Flames - The Jester Race

The Swedes recruited Anders Fridén for their classic second album, proving the Gothenburg Sound was no mere flash in the pan.

They would make bolder and better records further down the line, but In Flames’ second studio outing established a thrilling, effervescent blueprint for the Gothenburg scene’s most successful band.

It’s a simple formula – Maiden-style melody with a death metal delivery – but a gloriously effective one that has had a colossal, enduring impact on how metal sounds today.

Ever the stoic, James Hetfield left the guyliner to the poseurs and attended to more serious matters, reflecting upon his mother’s death in the southern rock ballad Mama Said, facing his demons on the portentous Bleeding Me, spitting pure vitriol on the Motörhead-inspired Ain’t My Bitch.

Load marked a new era: where The Black Album had included a little token thrash metal, Load had none. Metallica put their own past behind them. Their most controversial album – well, until Lulu surfaced – and their most underrated.

Neurosis - Through Silver In Blood

Having worked their way up through the crust punk scene in the late 80s, Neurosis began to evolve into a far more dangerous beast during the following decade.

The album Through Silver In Blood finally captured the nightmarish hell inside their collective head in all its savage glory. A percussive, hypnotic sonic assault dressed up as post-metal.

This was their pinnacle: metal reinvented as tribal ritual.

After three such groundbreaking and essential albums as Cowboys…, Vulgar… and Far Beyond… Pantera were faced with something of a quandary. Should they stick to their guns and deliver another high-octane set of brutal, headcrushing metal, or try to do something slightly different?

Brothers Dimebag and Vinnie Paul were both keen on the latter, singer Anselmo favoured the former. Bassist Rex, never the most voluble member, probably kept his opinions to himself.

The resulting album proved the brothers had won out, and The Great Southern Trendkill is easily the most diverse of the modern-day Pantera albums, even dipping into balladry on the likes of 10’s and Suicide Note Pt. 1.

Lyrically, Anselmo’s normal poetic angst was replaced by drug-related diatribes and rants at the media, showing something, somewhere, was very wrong indeed.

Rage Against The Machine - Evil Empire

Rage’s second album fanned the flames lit by their debut. Money men, arms dealers, shock jocks – all were in their sights.

Evil Empire represented everything great about the band: the steadfast groove of its rhythm section driven by Brad Wilk’s urgent stop-start drum fills and the crunchy distortion of Tim Commerford’s bass, the unmistakable wah-wah guitar work of Tom Morello and his impenetrable solos that flip from explosive riffing to turntable scratching at the flip of a hat, and the rapid politicised polemic of vocalist Zack De La Rocha.

Aside from that, it’s a scathing lambaste of US society, seething in anger and explosive in deliverance, and a fine example of the rousing mix of music and politics that made Rage Against The Machine such an unstoppable force.

The first song that anyone heard from the Roots sessions was, of course, the mighty Roots Bloody Roots. To this day, the defining moment of both Sepultura’s and Max’s careers, this pummelling tirade of rumbling riffs, thudding percussion and Max’s throat-rending call-to-arms vocal was an instant classic when it was released as a single shortly before the album’s release.

The defining moment of the Roots recording sessions came at the very end of the process, when Sepultura travelled to the depths of the Brazilian rainforest to record Itsári in collaboration with the indigenous Xavante tribe; the fulfilment of Max’s Roots concept.

A glorious epitaph for the legendary Max Cavalera era.

The first Tool album to be recorded by the classic line up, with former Peach bassist Justin Chancellor joining the band for the first time, was to be the record that really established the band as genuine one-offs.

Aenima is the first time where Tool sounded like nobody else but Tool. Weird, esoteric, sarcastic, unsettling, progressive, complex, involving... it is a masterclass in teasing the listener and keeping them on their toes.

Stinkfist was the big single, but the nine-minute build of Eulogy (going from two notes to a wall of furious noise) or the psychedelic nightmare trip of the closing Third Eye (possibly their finest song) really showed the world the real Tool for the first time.

Ritual magick, sacred geometry and the comedy of Bill Hicks – like nothing before or since.

After a prank opener and a jovial message of thanks from the band, this autumnal epic represents the culmination of Type O Negative’s progress from ugly ducklings to ugly swans, honing their dreamy alt-pop sensibilities while nailing some of their most affecting doom atmospheres in Red Water, Wolf Moon and Haunted.

But it’s the lush harmonic textures and radiant romanticism that proved the biggest revelation, holding the attention for 70+ minutes of unorthodox beguilement.

Peter Steele fleshed out his band’s grandiose vision here – and wrote the perfect gothic pop song in My Girlfriend’s Girlfriend.