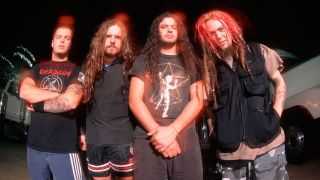 Few groups in metal have had as storied a career as Sepultura. From monumental, genre-defining records to deep inner band turmoil, the Brazilian titans have had their fair share of ups and downs. And for as many hard-hitting anthem and successful albums that they have attained, there are some forgotten gems lurking in their back catalogue. With-Max and post-Max – here are the ten most underrated songs in their thirty-plus year treasure trove.

This was the sound of a band finding their feet again after their split with original member Max Cavalera, with Vox Populi (Latin for ‘voice of the people’) serving as a rallying cry for the fans, not just against the political establishment, but also in celebration of their own newfound revitalisation as a group.

9. Manipulation Of Tragedy (The Mediator Between Head And Hands Must Be The Heart, 2013)

This sensory overloaded track is all too welcome from a band with Sepultura’s level of percussive mastery, delivering blow after blow throughout its turbulent four-minute duration. Pummelling in every sense of the word, Manipulation Of Tragedy stands as one of the group’s best attempts at merging thrash and groove metal – an ungodly amalgamation pulled off with supreme ease here.

It’s not uncommon for a brilliant song from an equally brilliant album to fly under the radar somewhat, and Meaningless Movements from Sepultura’s classic Arise is one such song. It has everything a fan of thrash could want; super mean riffs, drilling drum patterns and a throat tearing vocal performance courtesy of the dreadlocked destroyer Cavalera. This all adds up to make this a vicious exercise in skull-crushing brutality.

Opening on a devastatingly stomach-turning bass drop, this song takes hold and doesn’t let go until the final seconds of its ferocious onslaught. Corrupted sees the group return to their roots to a certain extent (no pun intended), delivering a fast-paced, blast from the past that’s sure to warm the cockles of any old-school metalhead’s heart.

Okay so the production leaves a lot to be desired, but the early potential is clearly there. From their first EP Bestial Devastation (and later featured on the reissued Morbid Visions), Antichrist is the sound of a band trying to find their own style, with plaudits in particular going to Igor and Max for the intensity of their drumming and vocal performances at such a young age.

With a chorus line like “Born in pain, born stubborn!” permeating this one, you bet your arse the other musical components need to be every bit as fiery as those sentiments. From the landmark release Roots (and last with the original line-up), Born Stubborn is one of those songs designed to get blood pumping, as well as featuring one of the group’s most frantic outros. Has been somewhat lost in the shuffle over time.

Based around the book A Clockwork Orange, Sepultura’s 2009 conceptual LP A-Lex is ambitious in nature and almost flawless in execution. This buried belter contains moments of explosiveness from the off, powering forward with complete disregard through the use of some scintillating guitar riffs, thunderous drumbeats and a howling vocal display from frontman Derrick Green. Criminally underrated.

3. Sarcastic Existence (Beneath The Remains, 1989)

Standing out on an album that contains Inner Self, Slaves Of Pain and Mass Hypnosis is a difficult task. You’d be missing out however to simply look past the uncompromising, fist pounder Sarcastic Existence. What it may lack in immediacy, it makes up for in bone-rattling bombardment. Good luck catching this one live though – it has rarely seen the light of day since its release in 1989.

As all fans of the band know, the bruising Brazilians aren’t averse to mixing things up in an experimental sense, and one composition from 2006’s Dante XXI epitomises this to the nth degree. Often looked upon as simply an album track rather than a standout hit, Ostia more than deserves to go down in the history books as one of Sepultura’s most ambitious songs to date. Cellos + Sepultura = ear-shattering bliss.

Sepultura’s sophomore effort Schizophrenia (the first to feature Andreas Kisser) really found the group hitting creative enlightenment, and no track exuded this more than the steamrolling speeder To The Wall. This monstrosity of a song retains the burning intensity of the band’s earliest output, while also demonstrating that they can still evolve even within a more thrash-centric template. Essential listening.

Sepultura: "I Cut Off My Hair To Get A Copy Of Ride The Lightning"