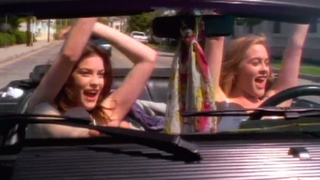 Their classic albums may have been recorded pre-MTV, but savvy Boston rock legends Aerosmith adapted quickly to the video age after their ground-breaking, genre-fusing1986 promo for Walk This Way – a collaboration with New York rappers Run-DMC – offered the quintet a second shot at superstardom.

Astute collaborations with A-list directors, coupled with Steven Tyler’s magnetic personality when placed in front of a camera, have ensured that the ‘Smiths have remained one of the high profile rock acts in the world ever since. Here are their 10 finest outings on film.

If you’re thinking that an Aerosmith song titled Girls of Summer might just possibly receive a video treatment featuring numerous attractive young ladies in bikinis you’d be bang on the money, but the twist here is that these particular young ladies are empowered, sassy, rebellious bad-asses, who strut through the video taking shit from no-one, puncturing inflated male egos at every turn.

So that’s okay then. This is basically Spring Breakers-meets-The Prodigy’s Smack My Bitch Up promo, but glitzier, but stick around to the end, for a memorable beach scene with Steven Tyler, which puts a whole new spin on the idea of ‘hooking up’…

The tongue-in-cheek storyline behind this Nine Lives-era power ballad takes a cue from cult comedy Weird Science with a harassed, regularly humiliated (and atypically handsome) science nerd deciding to bolster his reputation by creating an uber-hot girlfriend (played by a pre-fame Eva Mendes) in a laboratory.

Quite why he felt this necessary when the prettiest girl is his classes is constantly throwing smitten looks his way is a mystery, but hey, this is not our concern. Anyways, there’s a happy ending for our hero, Steven Tyler gets to ham it up relentlessly and Ms Mendes went on to become a Hollywood star, so good news all around.

Best known for directing Nirvana’s iconic Smells Like Teen Spirit video, and with a CV boasting commissions from Metallica, David Bowie and the Rolling Stones, Samuel Bayer latched on to the “I followed Alice into wonderland” lyric from the third single from the Just Push Play album and cast Steven Tyler as the Mad Hatter in the song’s trippy, woozy video.

As ever, there’s a gorgeous female lead involved, but the real stars here are Joe Perry oiled pecs, which glisten like mirrorballs every time the camera is trained on the shirtless and impressively buff guitarist.

The video for Pump’s smash hit lead-off single starts in preposterous fashion – with Playboy Playmate, and future wife of Nikki Sixx, Brandi Brandt playing a department store lift operator who runs her eyes suggestively over Steven Tyler before delivering the immortal line ‘Good morning Mr Tyler. Going down?’ – and only gets sillier and saucier from there on.

In case you’ve forgotten, or been distracted perhaps by the dwarves, the bikini-clad dancing mannequins or the sight of Tyler dry-humping Joey Kramer’s drum riser, one of the video’s scenes features a female model scuttling around the floor on all fours, with a stuffed leopard’s head affixed to her arse, for the entertainment of a whip-wielding circus ringmaster. You don’t get that In Tesco.

Incidentally, Brandi Brandt is currently serving a six-year jail sentence in Australia for conspiring to smuggle cocaine into the country, so that ‘Going down?’ query now has an unfortunate irony attached.

More lavish, high-camp, fantasy-world nonsense here, as Mila Kunis plays a beautiful, spoiled but bored rich girl cooped up in a palace with only fire-breathers, snake-chamers, stilt-walkers, acrobats, dancers and a retinue of creepy, overly-officious ladies-in-waiting for company.

At one point, as our heroine looks in a steamed-up mirror, the words ‘What do you want?’ appear, to which poor Mila responds ‘To feel.’ Like, deep, huh? Anyways, long story short, Mila escapes her gilded cage, finds a gateway into an emerald forest and, being overcome with the sheer beauty of nature and stuff, squeezes out a couple of perfectly formed tears onto her pretty cheeks. Hurrah, another happy ending!

The last of three consecutive Aerosmith videos from the Get A Grip album featuring a pre-Clueless Alicia Silverstone (the first two being Cryin’ and Amazing), the plot of Crazy sees a bored Catholic schoolgirl and her bezzie mate (played by Liv Tyler) bunk off classes for a spot of shop-lifting, pole-dancing, skinny-dipping and heart-breaking, all the while hinting that they might be more than just ‘gal pals’, as the Daily Mail might coyly suggest. A lovely time is had by all.

Not a promo video in the traditional sense, Steven Tyler’s and Joe Perry’s performance of their 1973 hit with the Southern California Children’s Chorus premiered on ESPN’s magazine news programme E:60 on April 15, 2014 on a special show (titled E:60 Presents Dream On: Stories From Boston’s Strongest) marking the first anniversary of the bombing of the Boston Marathon.

Stripped back to vocals, Tyler’s piano and Perry’s guitar, the song’s emotional weight is accentuated by footage celebrating the memory of the three people who died in the attack, making it an Aerosmith video quite unlike any other. The song was released as a single on iTunes in July ’14.

Before he began a brilliant directorial career which has included films such as Seven, Fight Club, The Girl With The Dragon Tattoo and Gone Girl, David Fincher made this starkly emotional promo revolving around the theme of a victim of incestuous sexual abuse taking murderous vengeance on her father. Hardly staple MTV fodder, the video nonetheless picked by the Viewer’s Choice award at the 1990 MTV Video Music Awards.

One of the most memorable rock videos of the 1980s, and inarguably the most important video of Aerosmith’s storied career, Small’s promo for the band’s rap-rock collaboration with New York hip-hop trio Run-DMC – an idea conceived by Rick Rubin – saw the walls between the two genres literally crumble.

Aerosmith’s much-touted comeback on Geffen had stalled embarrassingly with the mediocre Done With Mirrors album, but this clip brought the Boston hard rockers a whole new audience and incalculable street cool. “It put [Run-DMC] on the map and it resurrected us,” admitted Joey Kramer. “It just shows you the power of one song.”