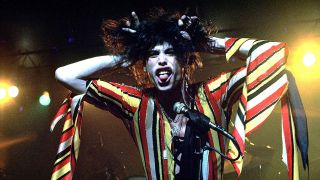 Last time we checked in with Aerosmith, they'd booked a run of dates at the Park Theater in Las Vegas, the kind of well-paying residency enjoyed by artists who know they're still highly bankable, but are getting a little tired of the daily grind of life on the road.

Hell, they'll probably soundcheck once at the beginning of the 18-date-run and spend the rest of the time eating the onion soup dished up by Bouchon at The Venitian. That's what we'd be doing.

One of the things you can guarantee is that this is going to be Greatest Hits territory. It'll be Dream On,Walk This Way, Sweet Emotion, Back In The Saddle, Love In An Elevator, Cryin’, I Don’t Want To Miss A Thing. It'll be predictable.

But what we’re focusing on here are the lesser-known classics – the 10 best deep cuts by this legendary band.

Permanent Vacation was the resurrection of Aerosmith: a legendary band of the ‘70s reborn in the ‘80s. Their comeback was achieved by bringing in hit songwriters from outside of the band to bring the music in line with contemporary arena rock. Two US top 20 singles, Dude (Looks Like A Lady) and Angel, were co-written with Desmond Child; a third, Rag Doll, was written with Holly Knight. But there was one song on the album that was credited to the five band members and nobody else. And it’s the weirdest thing they’ve ever recorded.

The Movie is essentially an instrumental jam, built around a heavy, hypnotic riff. The one voice that is heard is not Steven Tyler’s – instead, it’s a woman speaking in an arcane language, reported to be Gaelic. What it proved is that Aerosmith didn’t need drugs to get totally out there. File next to ZZ Top’s Heaven, Hell Or Houston as one of the strangest songs ever made by a major rock band.

Aerosmith’s first album was one of a number of classic American hard rock debuts released in 1973, alongside those by Montrose and the New York Dolls and Lynyrd Skynyrd. For Aerosmith, the ballad Dream On became a signature song. Another,Mama Kin, was later covered by Guns N’ Roses. And among the deeper cuts is Write Me A Letter, a funky rock song rooted in rhythm and blues. With Steven Tyler blowing harmonica, it is, in the parlance of the times, a blast.

If ever a comeback album fell flat on its arse, it was the one that Aerosmith released in 1985. Although the original line-up reunited for Done With Mirrors, they struggled to recapture that old magic. And while their producer Ted Templeman had so many cut great records in the past – notably with Van Halen and Montrose – this was one turd he couldn’t polish. There was just one great song on the album, and even that wasn’t new.

Let The Music Do The Talking was originally recorded by The Joe Perry Project in 1980. But it was always, in sound and spirit, an Aerosmith song. And what Steven Tyler brought to this version – smarter lyrics, and super-sized rock star charisma – took it to a whole new level.

In the early ‘70s it was the golden age of funk, with bands such as Parliament, The Commodores and The Ohio Players laying down the law with the heaviest grooves. There were rock’n’roll bands that got the funk – Free, Skynyrd, Trapeze. And Aerosmith were as funky as any rock band of the era – as proven by their version ofMother Popcorn, a song originally written and recorded by the Godfather Of Funk, James Brown.

Aerosmith cut the track in 1973 for a Boston radio broadcast. It eventually surfaced five years later on the double live album Live Bootleg. For a bunch of white boys, they had an intuitive feel for the song. Tyler gets into it without resorting to parody. And in this were the seeds of the great funky songs that Aerosmith made in the mid-70s – Walk This Way and Last Child.

By 1977, when Draw The Line was released, Tyler and Perry were pretty much gone – deadened by heavy drug use, they were running on empty, the band fast unraveling. Somehow, from the murk they pulled out a half-great record with a frantic, frazzled title track, a moody epic in Kings And Queens and, in I Wanna Know Why, a gloriously whacked-out, high-octane rock’n’roll song. The Bad Boys from Boston never sounded badder.

No Aerosmith album is as underrated as Rock In A Hard Place, recorded after Joe Perry and Brad Whitford had left the band. Amazingly, the two guitarists that came into the group, Jimmy Crespo and Rick ‘The Doof’ Dufay, sounded just like the real thing. And while Tyler was by own admission strung out at this point, he roused himself to perform at optimum level.

Never mind the Stonehenge cover art: Spinal Tap before Spinal Tap. Rock In A Hard Place is full of killer songs, none better than Bolivian Ragamuffin, with a cranking, badass riff that’s quintessential Aerosmith – a dagger to Joe Perry’s heart.

Joe Perry walked out on Aerosmith halfway through the making of their 1979 albumNight In The Ruts. Even so, it’s one of the band’s very best – just a notch down fromToys In The Attic and Rocks. There are so many doozies on this album: No Surprize,Cheese Cake, Three Mile Smile, Tyler’s beautiful ballad Mia, and inspired covers of the Yardbirds’ Think About It and the Shangri-Las’ Remember (Walking In The Sand).

The standout is a version of Reefer Head Woman, a blues song first recorded by Bill ‘Jazz’ Gillum in 1938. Few hard rock bands have ever played blues as convincingly as Led Zeppelin, but Aerosmith matched them on this song. The guitar solo – introduced by Tyler yelling, “Mister Perry!” – is so good, so full of emotion, it’s hard to believe that the guy was about to quit the band.

The band’s second album Get Your Wings was not a hit, peaking at number 74 on the US chart. Three singles from it all stiffed. But it is, undeniably, a classic record. It features Train Kept A-Rollin’, Same Old Song And Dance and the enigmatic ballad Seasons Of Wither. Best of all is the last song they wrote for the album – Lord Of The Thighs.

The whole thing reeks of sleaze, from the lowdown and dirty riff to Tyler’s dark lyrics, in which he revels in the role of a pimp. And the way he sings the word “socialise”, drawing out the last syllable, has such an air of menace and decadence it makes Bon Scott sound like a choirboy.

It was with their third album Toys In The Attic that Aerosmith came of age and sealed their reputation as America’s Rolling Stones. It features a handful of their most famous songs – Walk This Way, Sweet Emotion and the title track.

Less celebrated, but equally brilliant, is Uncle Salty, a beautiful, trippy, swinging tune with a whiff of 60s psychedelia in its blissed-out refrain: “Ooh, it’s a sunny day outside my window...” Tyler’s vocal melody in the verses would be ripped off many years later in Shania Twain’s mega-hit Man! I Feel Like A Woman! Yes, really!

Aerosmith. Rocks. Probably the best album title of all time. And the band delivered on that title with a record as great and definitive as the one that preceded it, Toys In The Attic. This is Slash’s favourite Aerosmith album, and it includes what is surely their coolest song.

Combination cruises along on a slow, smokin’ riff, and has Perry sharing lead vocals with Tyler, singing about drugs and their high-rolling lifestyle: “Walkin’ on Gucci, wearing Yves St. Laurent/ Barely stay on ’cause I’m so damn gaunt.” It’s the Toxic Twins at their most elegantly wasted.