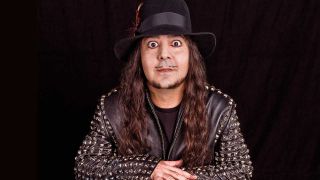 The 90s witnessed a sudden and violent upheaval of musical trends not seen since the late 60s, and the world of heavy metal was no exception. The reliably subversive Metallica went mainstream, Pantera ripped open new dimensions of extremity and, up in Norway, the black metal renaissance erupted in a storm of blood and fire. Yet no band captured the genre-blurring schizophrenia of the time like System Of A Down, the visionary Los Angeles quartet whose exhilarating onslaught of thrash, pop, hardcore and Middle Eastern experimentalism launched them onto the world’s biggest stages. Impervious to pigeonholing, SOAD have scored a Grammy, seen all five of their studio albums reach platinum status and inspired a generation of melodic rule-breakers in their wake. Since System’s formation in 1994, the architect behind the band’s trademark sound has been guitarist Daron Malakian. And yet, if Daron had his way when he was 12 years old, System Of A Down might have never existed.

Speaking to us from his Los Angeles home, Daron recalls, “Since I could remember, I’d always wanted to play drums, and when we finally moved into a house where I could maybe have a drum set, my parents took me to the music store. But they decided among themselves that drums would be loud and I might bother the neighbours, so they bought me a guitar and amplifier instead because you could at least turn the amplifier down. So that’s how I became a guitar player – so I wouldn’t bother the neighbours. Ha ha!”

Entirely self-taught, Daron set to work learning the riffs from his favourite albums at the time – Ozzy, Kiss, Scorpions and, of course, Sabbath. “I learned how to play Iron Man – that was one of the first chord progressions that I learned,” he remembers. “Crazy Train was another. I’d be in my room playing my guitar all day – no one would see me. I’ve always just played the guitar when I felt like playing it and when I was a teenager, I always felt like playing it.”

It was in his late teens that Daron hooked up with eventual System Of A Down frontman Serj Tankian. Though eight years older than Daron, the two shared a passion for heavy music as well as their Armenian heritage – they had even attended the same Armenian school in Los Angeles, although at different times. Their first project saw the earliest elements of the SOAD sound fall into place. “Serj and I were in a band called Soil before System, and Soil had a lot of System elements to it,” Daron recalls. “But the songs weren’t compressed into two-, three- or four-minute songs; they were like these five- or six- or seven-minute-long songs where you’d never hear the same part twice, it would just go from part to part to part. Then I started listening to more stuff like The Beatles and The Doors – stuff that had a little more of a song structure to it. It was more of a challenge for me to take this sound that we had done in Soil and compress it into song structures and have verses and choruses and bridges. I realised that holding back was a lot more challenging than just putting all of my ideas out in one song.”

As nu metal commandeered the charts and alt metal began spiralling into a swampy morass of generic, mid-tempo sludge, System’s sound stood out for its curious melodic twists that drew heavily from Middle Eastern influences. Daron explains that the stylistic amalgam wasn’t a strategic or even a conscious decision – it just sort of happened.

“That style is kind of my roots,” he says. “My family is from Iraq so they listen to a lot of Middle Eastern music. My uncle lived in Greece for a little while and so I listened to a lot of Greek music when I was a kid. Being Armenian, when we’d go to Armenian weddings, an Armenian band would be playing Armenian music. For me, the Armenian and Middle Eastern scales were as natural as blues would be for someone who was raised in an American family. For me, it was more challenging to play bluesy stuff than it was to play those other scales, just because it was already in me. There was nothing I tried to do to make that happen. It’s just kind of there.”

That sound, combined with Daron’s pulsating power grooves and the band’s aggressive political outlook, would see System Of A Down ascend the 90s metal hierarchy and enter the pantheon of legends. After the thundering global success of 2005’s Mesmerize/Hypnotize dual releases, however, System went on hiatus, with each of the guys pursuing various side-projects and other enterprises. For Daron, though, very little changed – at least creatively speaking. In 2006 he formed Scars On Broadway, releasing a debut album in 2008. “[The hiatus] slowed me down from releasing music but it didn’t slow down my writing,” he explains. “I’ve constantly played and written throughout the years. I just haven’t released anything, because there’s a lot of confusion on what’s happening with System. Being the main writer in System Of A Down, I always felt like, ‘If System’s going to do something, then I should probably save these songs and put them out as System Of A Down.’ Now that I have a clearer picture on where all of that stands, I feel a little bit freer to release the stuff that I’ve been writing.”

Which prompts the question – what’s next for System Of A Down? While the band continue to tour sporadically, it doesn’t appear that we’ll see anything new from them in the near future. Daron is quick to clarify, however, that there’s no bad blood among the band. “In System Of A Down, we’re not enemies. There’s nobody in the band saying, ‘I can’t be in the same room with that guy.’ It’s nothing like that. It’s more about creative differences; differences on how I want to move forward and how certain other members want to move forward. We just can’t come to an agreement with that.”

Perhaps most importantly, they still relish doing shows together. “We enjoy doing the live thing and we enjoy playing those songs,” he says. “Everyone was just kind of on the same page with the live stuff, but not on the same page with the album stuff. I’m the only one in the band that doesn’t have kids and I’m the only one who’s not married. So when we do play, we don’t go on these year-long tours; we do three weeks a month in Europe or a couple of weeks here in the States in October. It’s just enough for us to get out and play and have a good time, and then for everyone to come back home to their families and not be gone too long.”

Ask any guitarist to pick their own favourite riffs and you’re likely to meet with agonised silence. Daron’s no exception, but when pressed, he replies, “Aerials always stands out as a song that I wrote that I’m really proud of. It’s not the most ‘riffy’ song, but I like the mood that Aerials sets. I’m also proud of B.Y.O.B. It’s got a really interesting arrangement, where it’s got kind of a Motörhead drive to it in the beginning and then it turns into a funkadelic chorus. I was just trying things. Some experiments work and some don’t work out, and I’m really proud of the ones that did.”

For the time being, Daron is gearing up for the release of Scars’ hotly anticipated sophomore outing, Dictator. “I didn’t really put too much time into the first Scars album, so I’m putting a little more love into the band now,” he says. “I’m not expecting Scars to be as big as System or anything like that. I’d just like to see Scars get up on its feet and get some recognition on its own, and I’m ready to put some time into it, whether it be touring or interviews or stuff like that – all of the things that you have to do that I didn’t do the first time around with Scars. That’s really where my focus is right now.”

In October, System will go out for a five-date tour of North America. As with all of their live dates, these shows give Daron pause to reflect on all he’s achieved and the people he’s met along the way. “I just feel really lucky,” he says. “We haven’t released any new music in 10 years, so for people to still appreciate those songs means a lot to me. A lot of the kids that I see at the System shows were either really young or maybe some of them weren’t even born when our band started, so to see that makes me really proud and I think it’s a testament to the songs. When I see that kind of appreciation for the songs, it makes me feel almost like I’m proud of my children. It gives me pride to know that these songs that I wrote were strong enough to survive the test of time and still have a life 20 years later.”

The new Scars On Broadway album Dictator is available to buy now from Amazon and from HMV.