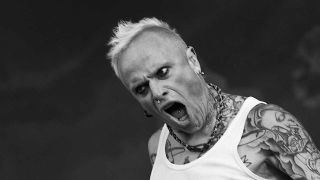 Few bands have had as unique a career as The Prodigy. The Essex outfit started out as a toytown rave outfit with novelty 1991 single Charly, and 1992’s debut Experience positioned them front and centre in the 90s dance scene, but everything moved in a decisively heavier on the albums that followed.

It may have been Liam Howlett pulling the levers, but it was Keith Flint's demented performance in the Firestarter video that launched The Prodigy into the mainstream, and for many he remained the face of the band until his death in 2019. Howlett has he plans to continue making music as The Prodigy, but for now revel in these stone cold bangers from dance music’s heaviest band.

Heaviness isn’t merely measured by how much you sound like Meshuggah, and even though the Prodigy’s earlier material leaned more on dance music’s tropes, 1994’s Music For The Jilted Generation suggested a change in tack. The guitars on Their Law and Voodoo People are obvious examples, but this part the band’s Narcotic Suite triptych, Claustrophobic Sting, measures by a different kind of weight.

The repetitive, pinched synth lines are stretched to their limit and the Prodigy’s percussive edge is sanded off in a more dramatic fashion during the song’s climax; the eerie call of “my mind is going” amidst industrial clanging is akin to Skinny Puppy’s Convulsion. Which is a good, albeit terrifying, thing.

Nirvana’s Very Ape has its riff re-used here, resulting in the Prodigy dancing their arses off while being rather spooky. The first two minutes are a dingy, downstairs rave where no armpit remains dry; the rest continues said rave but filtered through more drama, like they’re being chased through the studio by the ghost of an early PS2 first-person shooter.

While less beefy than some of the songs listed here, Voodoo People stands its ground based purely on the brilliant hold-and-release technique utilised throughout its six-and-a-half minute duration. And when this goes off live… run.

The Fat Of The Land was released in 1997 and established the Prodigy as genuine legends. You all know what went down surrounding Smack My Bitch Up and its accompanying video, but one of the record’s most endearing qualities is its acknowledgment of rock music’s trajectory. Nu metal was yet to reach its dregs, and some of these tracks – Serial Thrilla in particular – seem almost a response to that burgeoning, mostly American scene.

Skunk Anansie’s Selling Jesus and another Nirvana track, this time Smells Like Teen Spirit, are both pilfered for samples; plonk that atop obnoxious turntable usage, beefy beats and Flint’s lip curling to the tune of Johnny Rotten, it’s as much a riposte to nu metal as it is a nod to fellow brits Pitchshifter. Who were also very, very good.

Many regard the Prodigy’s fourth record, Always Outnumbered, Never Outgunned, as a turd in an otherwise tasty sonic broth. Well, they’re wrong. While the album’s easily the weakest of the band’s six full-lengths, it’s by no means cack; opening track Spitfire, featuring Juliette Lewis, is a venomous, vocal-led assault that also focuses on the guitar/drum crunch the band would perfect on their following two LPs.

Howlett was weaselling away at this batch of tracks as early as 1998; they can’t all be zingers, but Spitfire alonewas worth the six year wait.

One of several Invaders Must Die tracks crawling into the upper echelons of this list, Piranha has Maxim detail, erm, a piranha ripping you apart. Which is lovely. Tim Hutton’s ridiculous horns and the horror-themed theatrics all contribute to this song’s blissful belligerence; while not the perfect Invaders Must Die cut, its mixture of the organic and electronic is certainly one of the stand-out moments.

As bullish as its title suggests, Rok-Weiler is a rock song through and through. Boasting guitars courtesy of Holliday and a crunching chorus that’s just plain naughty, this track’s pulsing electronics and foolishly barked refrains are so childish – that’s what’s so great about it. Rok-Weiler’s hydraulic heaviness is guaranteed to put a bouncy castle in your step.

The title track and opening gambit to one of the greatest creative resurgences in recent musical history, Invaders Must Die builds with that pulsating, puerile bassline before that bit. You know the bit. “We are the Prodigy.”

There’s not a guitar in sight but no matter; the sheer force of this song breaks any weighing scale foolish enough to sit beneath the Prodigy. A turning point for both the band and their fanbase, Invaders Must Die is an essential listen and an absolute neck-snapper in the live arena.

Flanked by the militaristic pounding of the Top Secret Drum Corps, the Prodigy kicked off their sixth full-length with this slathering slice of sexiness. Applying the repetitive, cyclical nature of their early material to Invaders Must Die’s rock-based racket, the band conjure a gruelling, endless onslaught that’s juxtaposed by Martina Topley-Bird’s warbled vocal performance.

Overall, it’s an unsettling few minutes that’ll rattle your ribcage, tickle your funny bone and send you into a limb-flailing frenzy.

Anything with Grohl on it’s going to induce nappy-changing the world over, but his performance through Run With The Wolves undisputedly provides Invaders Must Die with one of its earthiest, heaviest moments. “I’m a beats man and a beat thief through and through,” said Howlett to Hot Press at the time. “And hey, if there’s a drummer to sample, then Dave Grohl’s the man isn’t he?” Yes he is, Liam. Yes he is.

Well… it’s literally named after a wall of death. Scooped from The Day Is My Enemy’s backside, this track is every bit as riotous as its title suggests; Howlett’s love of horror gets another look-in through the keys, there’s a metal guitar riff that leads you straight into bouts of elephantine electro and the proclamation, “Fuck this and fuck the cash, fuck you and your heart attack!” is a suitably nasty parting shot from the Prodigy’s sixth LP.

Christ, even the bit when there’s just fingers clicking sounds more menacing than excerpts from Michael Myers’ journal. Wall Of Death is the Prodigy’s pinnacle when it comes to unyielding, all-out heaviness.