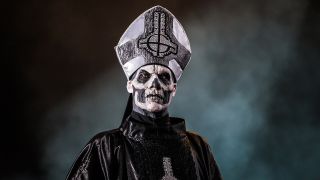 In a decade dominated by phenomenally-strong releases, jaw-dropping stories and a thundering stampede of vital new artists, no story dominated the headlines like the rise of Ghost.

On the surface, the whole concept seemed destined for obscurity: a coven of anonymous musicians from Linköping, Sweden release a trio of groovy retro-rockers on social media. They hide behind makeup and masks and they pen lyrics so deeply Satanic as to scare off nearly all mainstream outlets. Too dark for pop audiences and too polished for metal, they are a ragtag band of faceless Scandinavians with no identifiable genre to call home. And yet, within a few years, Ghost are collecting Grammys, selling out the most iconic venues on the planet and hijacking the covers of every heavy metal outlet on the planet. Just how the hell does this happen?

The idea of Ghost took root in 2006 when Tobias Forge, an aspiring Swedish guitarist, wrote Stand By Him – a sharp and compelling slice of hard rock in the Seventies hard rock tradition of Blue Öyster Cult and Pentagram. Originally written with Swedish lyrics, this song would linger in anonymity until 2008, when Forge teamed up with his friend Gustaf Lindström and the two recorded Stand By Him, Prime Mover and Death Knell ­– a trio of masterfully-produced occult bangers that blended propulsive basslines and smooth, driving riffs with the over-the-top theatricality of Mercyful Fate.

Unable to find a permanent singer for the project, which he called Ghost, Forge stepped into the role himself and in March, 2010, he released the three tracks (with English lyrics) on MySpace, describing the music as ‘Satanic doom,’ set beside a simple photo of a cathedral bathed in moonlight.

Whereas most new bands conceive wild, over-the-top publicity campaigns to attract the attention of anybody who will give them a listen, Forge instead focused on the obscurest of niches, so as to attract only those devoted few who might fully embrace his vision. It was a stroke of brilliance because, after all, when you try to please everybody, you invariably please no one. And in reality, Forge wasn’t thinking of global dominance, mansions and guitar-shaped swimming pools when he wrote these songs. Hell, by that time, he was almost thirty and a married father of two, working at a call centre.

All this was about to change.

Within two days of posting the three tracks to MySpace, a horde of record companies and managers were pounding at his virtual door, hoping to spin Ghost’s ultra-hooky sound into gold. And that’s precisely what happened.

The band released their debut, 2010’s Opus Eponymous, to feverish adoration. With its chugging riffs, eerie waves of echo-drenched fretwork and lush vocal harmonies, tracks like Ritual, Elizabeth and Prime Mover re-cast the highly-polished arena rock of the Seventies with a thrilling new sense of vitality.

They would go on to release a string of progressively more elaborate outings, such as 2013’s Infestissumam, 2015’s Meliora, which featured Cirice, which won the 2016 Grammy for Best Metal Performance and EPs such as 2013’s If You Have Ghost and 2015’s Popestar. 2018 saw the band release Prequelle, a soaring hard rock masterpiece of breathtaking depth and grandeur. Their most ambitious outing by a mile, Metal Hammer readers and critics, and indeed, fans across the world, united in hailing it as the best album of 2018.

Yet despite these successes, Ghost’s fame and accolades have not come easy. Not only are Ghost’s sharp Satanic provocations wholly incompatible with mainstream media, but Forge hid his own identity and that of the entire band (called “Nameless Ghouls”) behind masks and his own creepily made-up persona of Papa Emeritus/Cardinal Copia.

Through rumour and widespread Internet sleuthing, Forge’s identity would eventually devolve into a poorly kept secret, but in a society obsessed with identity and information stalking, hiding behind the music suggested a level of self-sabotage. But fans — mainly those in the metal community — could not get enough of this cursed new anti-Pope and his masked sacrilegious bandmates. Overt occult imagery and over-the-top Luciferian tributes were, after all, quite common in metal culture. And on a deeper level, Ghost embodied a fierce antiauthoritarianism that was refreshingly creative and wholly genuine – qualities found in virtually all metal legends. And so it was in this counterculture where they found their greatest support.

In their early years, support slots on tours with Iron Maiden, Mastodon and Opeth spread their wicked gospel, as did appearances at Download, Coachella and eventually a slot on US late-night TV, when they played on the 2015 Halloween special of The Late Show With Stephen Colbert. Perhaps just as important however, was the public support from legendary metallers like James Hetfield and Dave Grohl, who produced the If You Have Ghost EP. However, not everybody rallied around the flag. Though claiming to like the musicians and appreciating their imagery, Slayer’s Kerry King famously said, “I just hate the fucking music.” Then there was the lawsuit.

Most bands that experience a sustained level of success will experience some turbulence along the way and for Ghost, 2016 saw the acrimonious departure of a number of Nameless Ghouls, who went on to sue Forge for unpaid royalties. This lawsuit, filed in 2017, shed a light not only on the identities of the musicians but on the inner workings of the band, with Forge pointing back to the original 2006 demos and insisting that Ghost had always been a solo project.

Outside of the band, parochial American attitudes had grown problematic. When recording Infestissumam in Nashville, the band were unable to find a choir willing to sing their Satanic lyrics and so they were forced to relocate to Hollywood to finish the project. The ability to weather such public adversity is essential to any great band and as we now know, Forge responded to these setbacks by blowing away the entire music industry with Prequelle and following the release with one of the most talked-about tours of 2019.

And so, at the dawn of a new decade, we find Ghost at the absolute top of their game and more committed and confident than ever. Ultimately, the reason for Ghost’s positively stunning breakthrough is that they consistently write great songs – the kind of music you crank in your car, sing in the shower and that you hum for hours after you’ve turned off the stereo.

Some might accuse Ghost of not being sufficiently “metal,” whatever that means in this day and age. And sonically, the band have little in common with most of today’s heavy metal. But therein lies Ghost’s greatest accomplishment – they have not, as some have claimed, redefined heavy; rather, Ghost have released a body of music so masterfully-crafted and so hopelessly-catchy, that they have inspired legions of metalheads to look beyond labels and silly genre alliances and to kick back and enjoy their devilishly entertaining brand of rock and roll escapism. And in heavy metal, there will always be room for songs that make us smile.

With the recent release of Kiss The Go-Goat and the promise of new music on the horizon, we expect their fans to be smiling for a very, very long time.