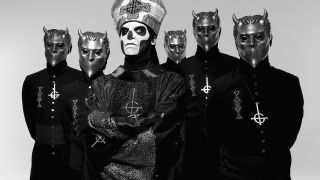 Four former members of Ghost have lost the lawsuit they brought against Ghost leader Tobias Forge.

News that Simon Söderberg, Mauro Rubinho, Henrik Palm and Martin Hjertstedt were to sue Forge for “missing wages and allowances for several years” emerged in 2017.

The four also claimed that a partnership was in place to distribute proceeds from the band, with the quartet also asking for Forge to disclose Ghost’s revenue and expenses between 2011 and 2016.

This was something Forge denied and the Linkoping District Court have agreed with the vocalist.

Linkoping News report that the court found that while there was a wish to have this agreement in place prior to 2016, it didn’t happen until the autumn of that year.

The website also reports that while Forge, Söderberg, Rubinho, Palm and Hjertstedt agreed to play together and perform live shows, there was not enough evidence to suggest a business relationship.

As a result of losing the case – the results of which were delivered in a 108-page document – the four have been ordered to pay Forge’s legal bills of 1.3 million Swedish kronor.

Söderberg, Rubinho, Palm and Hjertstedt have a three week window to appeal the ruling.