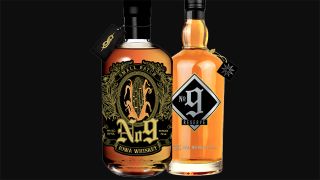 Slipknot have announced they’re about to release their very own branded American whiskies.

The band have joined forces with Cedar Ridge Winery & Distillery for the products – and they report it’ll be available from August.

Slipknot say: “Announcing No. 9 Iowa Whiskey, available August 10 at select retailers in all 50 states and across all Knotfest Roadshow North American dates.

“A collaboration with the Iowa-based Cedar Ridge Winery & Distillery, No. 9 Iowa Whiskey (90 proof / 45% ABV) and No. 9 Reserve Iowa Whiskey (99 proof / 49.5% ABV) are made with corn from the award-winning distillery’s family farm in Winthrop, Iowa.”

Both bottles carry no age statement and have a mashbill consisting of 56% corn, 36% rye and 9% malted barley.

“We collaborated on No. 9 Whiskey, which in addition to Iowa corn, gets some extra spice from its rye content. I hope you enjoy it as much as we do. Live life, and always be safe.”

To find out more, visit the Slipknot Whiskey website.

Slipknot will release their new album We Are Not Your Kind on August 9.

Metallica launched their Blackened American whiskey in 2018, while both Scorpions and Motorhead collaborated with Swedish distillery Mackmyra for their own branded whisky.

Find out more about the wide range of wines, whiskies and beers from your favourite bands by visiting our gift ideas page.