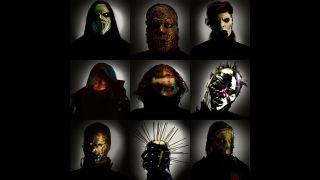 Slipknot finally revealed their masks on Thursday, along with a video for the first single, Unsainted, taken from their highly anticipated forthcoming new album, We Are Not Your Kind. Corey followed it up by sharing a more "detailed" image on his Instagram, showing each member's new disguise.

As with every new album each members' facade has been re-designed and, as usual, most maintain their established theme with a few new elements while others are are left barely recognisable – spurring much online and in-office debate (who the fuck is that?!)

Slipknot appeared on Jimmy Kimmel Live! last night, debuting their new looks in a live setting. They are back in their black signature jumpsuits with updated red accents and logos. Corey stands out with a military coat, rather than the boiler suit, meaning he can still lift up his roll-neck to hide half his face – just like in the video for Unsainted.

This all got us thinking, and analysing how exactly each mask differs from the last. So, we decided to compare each one, separately, with 2014's The Gray Chapter.

This mask was a gloriously creepy partially Leatherface-styled, riddled with rot and disease. However, a lot of fans didn't think it matched up to his previously instantly recognisable long-haired/dreaded disguise.

Upon first look, most fans aren't particularly impressed by this incarnation, with some commenting that it's "garbage" and he looks "like a chipmunk" – the comically oversized cheeks and roll-neck/scarf to help disguise them are perhaps not helping such reactions.

One Reddit user commented that it "looks like a bloated corpse that's been pulled fresh out of the river" – which is perhaps more of the vibe he was going for. However, we think he's a victim of rather extreme facial plastic surgery and is left rotting underneath a transparent, plastic see-through healing mask à la Eyes Without A Face.

Taylor previously commented: “The mask is a representation of the person on the inside, and nobody stays the same over time."

So what exactly is he hiding inside those cheeks? And why is he hiding such a significant part of the mask? Perhaps all will become clear upon the album's release.

Crahan's previous clown mask was satisfyingly gory. He'd returned to a more "traditional" clown look following the rather bondage-like get-up he had donned on 2008's All Hope Is Gone, but managed to make it even more creepy.

His clown mask was split to reveal a gruesome sight of blood and brains, and what's more terrifying than a psychopathic satanic clown? A zombie one.

This new clown is a far cry from the rest, in fact this version of one of the notable maggot masks is relatively tame and somewhat shiny... yet, the video for Unsainted does make him look rather sinister. We wonder what this metallic look could symbolise... cold, robotic, numb perhaps?

Last album, Root's jester-inspired mask was restyled to accommodate his newly grown and epically long, beard. This meant losing his (previously) signature zipper mouth. His eyes maintain the jester look, but with a gruesome twist.

This time, Root has adopted a slightly more Phantom of the Opera styled mask, moving away from the symmetrical jester look and appearing to be bolted to his head. It's undeniably the sexiest mask, but not exactly the scariest.

Sid's last look was a rather terrifying Venom-esque black leather gimp suit with metal goggle-eyes and incredibly sharp teeth that he could cover with a mouth protector – a look that was rather reminiscent of his previous mast on 1999's Slipknot.

Sid has made a drastic leap from his previous looks, pretty much entirely loosing the mask, this time ensuring most of the focus is on those every-changing, yet always terrifying grills. It almost looks as though he's supporting some form of creepy transparent mouth guard, and a cape that is seemingly modelled on Emperor Palaptine. We dig it.

Mick commented: “If you know who you are, you don’t need change. I think I pretty much nailed it with this one for being able to get across how I am." Fair.

Instantly recognisable, Thomson's mask is essentially identical to that of The Gray Chapter and previous, with just a little ironing out... (pun intended).

The plan was to give Venturella and Weinberg the same mask – as to not disrespect the members they'd replaced and on close inspection the two masks are relatively similar, but they undeniably put their own spin on each.

It looks like Venturella has truly been able to put his stamp on his second mask. This one is a rather brawny, ornate metallic mask. The detailing looks part-baroque and part-muscular. With its rigid metal framing, it is almost reminiscent of a medieval iron masked executioner, albeit with a little more flare, crossed with a lucha libre. He's replaced the formerly zipped up mouth with a square grill.

Jay's first mask as the new rhythm master was a very similar mask to that of the V-man. However, his long hair set it apart and the textured. Both his and Venturella's masks were engraved with a pentagram on the forehead and completed with a zipper mouth.

Jay seems to have based his second mask on the original, and it has a very Joey Jordison circa All Hope Is Gone vibe. Weinberg has ditched the pentagram on his forehead for a nine-pointed star – nice nod to the number of members in the band.

Similarly to the V-man, he's also dropped the zip-up mouth, opting for a stapled one instead, which both gives a nod to the late Paul Gray and compliments the bolted border around his bleak mask, that conjures up a slightly Hannibal Lector sorta vibe!

The pinheaded maggot nailed his look early on. He's pretty much stuck to that rubber bondage mask with long nails hammered through it and – one of Slipknot's favourite mask tropes – a zipper for a mouth, for the duration.

This album, Jones has been to a nail technician and had those bad boys styled. He's rocking an hard as nails mohawk... Okay I'll stop with the puns now (maybe).

Before Fehn departed the band after this album, he was one of the most distinctive faces of the band. Known for the reoccurring oversized nose on his mask, it was easy to pick him out of the sea of nine gruesome maggot masks.

For this album, his eyes were droopy, his mask was golden bronze and his "dicknose" was long and slender.

We have no idea who this mystery face is. Could it be that Fehn has returned? Unlikely. Who is this new member supporting a creepy maggot mask, seemingly transforming the wearer into a psychotic burn victim. When will they reveal the identity of this dermatologically diseased new custom percussionist? The mystery continues...