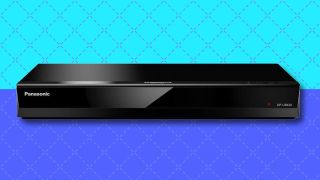 Why choose a Blu-ray player when you can grab one of the best media streamers and watch pretty much anything you want online, or dust off one of your old DVDs? Well, Blu-ray discs provide a massive jump in picture quality and sound compared to DVDs and some streaming sites.

Don't get us wrong, we love the likes of Netflix, Amazon Prime Video and NOW TV , but for pristine picture quality unhampered by flaky Wi-Fi, physical discs still rule, particularly when it comes to 4K UHD (Ultra High Definition), making our guide to the best Blu-ray players a must for a next-level movie night experience.

There’s no shortage of high performance Blu-ray players to choose from, making finding the ideal one for you easy on one hand yet tricky on the other because there's so much damn choice. Whether your budget is tight or generous, we’ve found some crackers for you to consider.

4K represents a revolution in the world of home cinema. Offering up to four times the clarity of regular HD, and the kind of image quality reserved for premium cinemas, making it well worth your while checking out the best Blu-Ray players and 4K Blu-ray players in our guide.

If you’re on a budget, we rate Sony’s UBP-X800 as the best Blu-ray player for sheer unbeatable value. Not only is it well built, but it boasts excellent picture quality and real Hi-Fi chops too. A good disc spinner should be just as useful when it comes to music playback, and this Blu-ray player won’t let you down.

If you’re after the top picture performer on the planet, be prepared to spend more. Panasonic’s DP-UB9000 is a premium Blu-ray player with the best image processing engine available. It’s pricey at £850, but that buys you a player with battleship build quality and superlative high-res audio playback.

Buyers should note that HDR comes in a variety of flavours. Standard HDR, known as HDR10, is common to all HDR TVs. But there are two more sophisticated varieties, known as HDR10+ and Dolby Vision. These offer greater picture accuracy, but require compatible TVs to deliver the goods.

UHD Blu-ray discs also offer superior sound, specifically Dolby Atmos immersive 3D audio. You don’t just listen to movies, you’re engulfed by them. Dolby Atmos doesn’t just surround you with sound like old school 5.1, it incorporates height information too. Sounds can pan from front to back, travel up high, and then rain down from the ceiling.

Even better, these high-spec players make kick-ass music players too. Most, if not all, are compatible with high-resolution audio formats, which means they’ll play back files with the same clarity as artists heard in the mixing studio.

Obviously, to realise AV nirvana you’ll need a 4K HDR telly and suitable amplifier and speakers, but we’ll assume you have those already.

Read on for our guide to the best Blu-ray players you can buy right now, from budget bargains from LG and Sony, to a high-end heavyweight from Pioneer you’ll want to save up for...

The best Blu-ray player for big performance on a budget

Proof that you don’t need to take out a mortgage to buy a stonking Blu-ray player, this sublime Sony combines solid build and cosmetics - the chassis uses Sony’s Frame and beam design, adding extra rigidity with 1.2mm struts -  with a tempting spec for the cash.

Not only is it a universal player (amazing for the price), it’s also high-res audio capable too.  Frustrating then that there’s no analogue output, so we’d certainly recommend investing in a decent desktop DAC for some analogue stereo warmth.

Streaming support is good and it also has some more unusual talents. With Bluetooth onboard, you can pair wireless Bluetooth headphones for when you want to crank up some Slipknot late at night.

It may look pricey, but when it comes to bang for your buck, this premium Panasonic player is one of the best Blu-ray players out there. It offers best in class picture quality, superior CD sonics and sports more body armour than Gene Simmons’ wardrobe.

The specification is top notch. HDR covers HDR10, HDR10+ and Dolby Vision. It’s also the best sounding CD player in the Panasonic fleet. You can tell it’s serious about sound.

It sports a pair of Neutrik XLR stereo connectors (only found on top-end Hi-Fi gear).

Niceties include all the main streaming services (Netflix, Amazon Prime Video, YouTube), and advanced video processing tech able to make the most of every Blu-ray disc you play. Indeed, we haven’t seen a Blu-ray player that looks better.

Tipping the scales at 10.3kg and selling for the best part of a grand, the UDP-LX500 is (amazingly) the cheapest and lightest of Pioneer’s two premium 4K UHD Blu-ray players.

A chassis cast reinforced with a resonance-defeating 3mm steel plate, plays host to an array of refinements designed to maximise sound and vision quality.

HDR covers all three key formats, so you can be sure you’re seeing everything the director intended. Significantly, the player also has universal audio playback, which means it’ll spin SACD and DVD-A discs so beloved of audiophiles, as well as vanilla CDs.

In a picture quality shoot-out with the Panasonic DP-UB9000, the Pioneer runs a close second, but it clearly trumps its rival when it comes to audio. Expensive, but exceptional.

Love gaming? Then this is the best Blu-ray player for you

Recommended Bundles
£259
View Deal at Microsoft
£289
View Deal at Amazon
£289.99
View Deal at eBay
See all prices (22 found)
438 Amazon customer reviews
☆☆☆☆☆
Does it all: gaming, streaming, discs
Saves a ton of space
Operational noise is higher
Menu nav with a joypad is a faff

The PlayStation 4 may have turned its back on Blu-ray, but Xbox is far more game. This is a great multimedia entertainment machine. Just download the Blu-ray player app, and your games console is good to go.

The only caveat is console noise. For this reason we don’t rate the Xbox One X as a CD player; it obviously doesn’t handle esoteric audio disc formats either. But who cares? When you run out of movies to spin, you can always go wild with Gears 5.

The DP-UB820 is a high-end Blu-ray player with an upper mid-price ticket, aimed primarily at owners of Dolby Vision enabled 4K TVs. Unlike its DP-UB420 stablemate, it’s a full-width player.

It also supports HDR10 and HDR10+, and does a decent job with CDs. There’s also the usual streaming services including Netflix, Amazon Prime Video and YouTube.

Picture quality is predictably excellent. We particularly like the brand’s HDR optimiser technology which lifts brightness and contrast without washing out an image. This makes movies easier to watch in a brighter viewing room.

Ludicrously over-engineered, and lumbered with a stratospheric price tag it may be, but that doesn’t dim our enthusiasm for Pioneer’s UDP-LX800. It’s really is the best Blu-ray player.

Constructed with a 1mm thick steel plate top and noise deadening aluminium side panels, build quality is even more impressive than the stablemate UDP-LX500 or Panasonic’s DP-UB9000. At 13.8kg, you wouldn’t want to drop one on your foot.

Under the lid, Pioneer has painstakingly separated analogue and digital circuits, giving each their own power supply. This approach owes much to Pioneer’s highly regarded PD-70AE SACD/CD player. The results pay dividends. This is hands down the best sounding Blu-ray music player you can buy.

It naturally handles all the HDR formats out there, and 4K picture quality is stunning. There’s no streaming services onboard, but frankly, we don’t care. This reference grade deck is pure class.

Image quality is great for the price. HDR support covers both HDR10 and HDR10+, but not Dolby Vision.

As a music player, it’s more a mixed bag. The deck has no problem playing high-res 24-bit FLAC and DSD files, and while it’ll play regular CDs, they don’t sound as good as a dedicated CD player might for the same money.

If you’re not fussed about 4K, this Blu-ray player is all you need

If you haven’t invested in a 4K TV, there’s little incentive to buy a UHD Blu-ray player. Stick with regular HD and you’ll save enough cash to get you into Download next year.

It’s pretty basic to look at - there's no display, just a left-set disc draw and front-facing USB port - but the user interface is crisp and graphical, and it comes with plenty of streaming services to binge-watch between discs.

Blu-ray image quality is unfettered by the budget price tag. Video is rich in hue and detail, and the player is ready and willing to fill your room with Dolby Atmos audio.

Perhaps even more surprising, given the lightweight build, our sample was refreshingly quiet in operation.  A genuine steal.