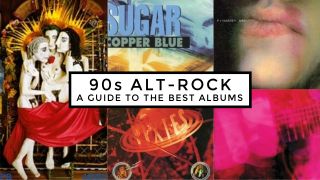 Here’s an incontrovertible rock’n’roll truth for you: one-hit wonders are always brilliant (You sure? – Ed.). They have to be, because they have little else going for them; no marketing campaign, no PR agency, sometimes not even a record company. And yet somehow they defy these disadvantages to worm their way into the collective consciousness like an intrepid Sherpa manages to climb Everest while carrying a rucksack full of house bricks.

Their secret is they’re just too good to ignore. It’s like that with the 90s alt-rock albums on our list. These are records that are so daring, so unusual, so wonderful that we had to invent a category to fit them in. They’re oddities. Outsiders. Square pegs. And the 90s needed them. Because that was the decade that saw things we loved being appropriated by people we didn’t: sponsored tours; videos on heavy rotation; rock stars invited to champagne receptions at Number 10. These things felt like a betrayal, and it chilled the blood of anyone who remembered the spirit of punk rock.

Many bands of the 90s thought they could break the system from within, but more often than not they just became part of it, like poachers-turned-gamekeepers. So what value could a word like ‘alternative’ carry now?

The 90s also saw music get mired in reductive and increasingly meaningless classification: grunge, nu metal, shoegazing, space rock, acid rock, college rock, even post-rock, for rock’s sake. Who came up with these tags? Who did they think they were helping? The music press were guilty, of course. And still are. So were format-obsessed radio stations and retailers.

But the chief culprits were the record companies, the multinational majors who first swallowed the independent sector and then each other. As their world got smaller, labels lost their bottle, their ambition, their appetite for risk-taking. And we, the fans, suffered, along with countless bands who resisted easy definition and ended up paying the price as a result.

So let’s give a loud three cheers for artists who offered a genuine alternative. Our list is populated by records that defied classification and convention: PJ Harvey’s primitive feminist proto-folk; dub-drenched Scottish gospel house from Primal Scream; the Pixies’ insane absurdist Latino surf punk. These were new sounds and new styles that challenged the norm, and treated the mainstream with the contempt it deserved. And very probably annoyed your mum and dad. Which surely is what alternative rock is supposed to do, right?

Like the Tibetan monks who create paintings out of sand and then throw them into the river, bands have a habit of unleashing their finest work and then imploding. It’s perverse, it’s wilful and it’s tremendously rock’n’roll.

Fitting, then, that Ritual… was JA’s swansong, because it espouses those values in spades. The whole record, from blistering opener Stop through back-to-back epics Three Days and Then She Did to Classic Girl’s spectral coda, is one gigantic ‘fuck you’; a toxic brew of funk, jazz and metal held together by an extraordinary performance from vocalist and bandleader Perry Farrell. View Deal

Loveless isn’t just an essential alternative rock album, it’s also one of the best albums of the 90s. It’s like an overwhelming out-of-body experience – transcendent beauty with a capital ‘trance’ – and its reinvention of sound, texture and mood in rock music sounds as radical now as it did in 1991.

My Bloody Valentine spent two years in the studio perfecting the formula: a dizzying blend of roaring guitars and sensual vocals from Kevin Shields and Bilinda Butcher. Loveless is a classic that’s spawned many imitators but has no peer. And we’re still waiting for the follow-up. View Deal

The Holy Bible was a watershed in the Manics’ career, an unusual interlude between their early-era glam punk and the expansive, anthemic sound they produced later. It’s a tense, claustrophobic exploration of the dark recesses of the soul, recalling the bleak grandeur of Joy Division.

It’s impossible to assess this record without acknowledging its back story. Thematically, it bears witness to Richey James’s inner turmoil and instability; he disappeared six months after this record’s release. 4st 7lb is an unbearably honest appraisal of his condition, and its lyrics read like a self-penned epitaph.View Deal

On the sleeve, Polly Jean Harvey’s mouth pressed against glass. It’s a startling image, vulnerable and exposed on the other. It’s also emblematic of this album’s chief preoccupation: an exploration of the iconography of womanhood. It’s at turns tough and tender. The rest of the lady’s band provides stark and abrasive backing – strong enough to keep your attention – but it’s singer Harvey that’s mesmeric. Her voice shifts seamlessly from a soft lament on death ballad Plants and Rags (this album’s standout track) to a guttural roar on scorching single Sheela-Na-Gig. This is a vital, visceral debut from a truly intoxicating artist.View Deal

Anyone who tells you that Bossanova represented a dip in form after the highs of Doolittle and Surfer Rosa clearly couldn’t have been at Gloucester Leisure Centre in 1991, or at last year’s glorious comeback gigs at Alexandra Palace, when a fevered throng saw the Pixies tear the roof off with renditions of this album’s opening tracks: Cecilia Ann, Velouria and the larynx-shredding Rock Music. Both occasions, 14 years apart, were almost religious experiences. So hear this, naysayers: the Pixies’ fourth album expands the band’s guitar onslaught to almost Wagnerian proportions, and it’s a sci-fi surf-pop masterpiece.View Deal

The early 90s felt like a comedown after the euphoric highs of the Second Summer of Love, but Primal Scream refused to stop partying. At a time when many inferior British bands were claiming that there had always been a dance element to their music, the PS created the most potent and influential crossover album of them all, filled with cult classics like Loaded and Higher Than The Sun. Collaborators included producers Andy Weatherall and Hugo Nicholson, and ambient dubsters The Orb. They can take a lot of credit for Screamadelica’s genre-spanning sound, which takes in soul, gospel, house and cavernous, wasted dub.View Deal

This thrilling debut from one of the defining rock bands of the 90s sounds like a blueprint for the rest of their career. All the elements of their sound are here: epic, progressive song structures, layer upon dense layer of showy guitars, a solid but swinging rhythm section, and of course Billy Corgan’s angst-ridden confessional lyrics and emotive delivery. Gish is dark, dramatic, and its moods are ever changing, from the slippery psychedelic riffs of rockers like I Am One and Siva to the album’s more tender moments with the chiming intricacies of Rhinoceros and the spidery folk strum of Crush. View Deal

As the frontman of quintessential alternative pioneers Hüsker Dü, Bob Mould cut one of the most revered and idiosyncratic figures of the 80s. Following a couple of low-key solo releases, he formed Sugar with bassist David Barbe and ex-Zulus drummer Travis. This, their 1992 debut, is arguably the most complete record of Mould’s career, and received critical acclaim and commercial success in equal measure. A string of beautifully crafted, addictive melodies ride giant waves of trebly guitar; the whole thing sounds like a choir of angry bees in formation. It seems churlish to pick highlights, but try If I Can’t Change Your Mind and the relentless A Good Idea.View Deal

It’s often said that what really made The Beatles exceptional was the density of songwriting talent within the group. Most bands would be happy with a Harrison (and some with a Starr); factoring Lennon and McCartney into the mix seems like cheating.

The same accusation could be levelled at Grand Prix-era Teenage Fanclub, with an album that sees Norman Blake, Gerard Love and Raymond McGinley throwing tunes like killer punches in a three-way playground scrap for pop supremacy. Blake’s Mellow Doubt, Love’s Sparky’s Dream and McGinley’s About You are radiant career highs. View Deal

Tool took three years to turn in this 77-minute follow-up to 1993’s incendiary Undertow, and it’s a heavyweight album in every sense. In many ways Aenima is a textbook alternative rock record, taking a high-concept, avant-garde sensibility inherited from punk and marrying it to metal’s fury and jaw-dropping technical prowess. Low on hollow posturing and high on intellect, it’s a considered package: musically, in progressive stylings borrowed from Rush and King Crimson; lyrically, in a willingness to push thematic envelopes beyond usual rock fodder, to include subjects like philosophy, evolution, genetics and metaphysics. View Deal