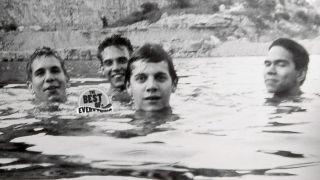 Jack Chuter is the author of ‘Storm Static Sleep: A Pathway Through Post-Rock’.

Released on November 30, Chuter’s 300-page book explores the genre’s history and features over 30 interviews including the likes of Mogwai, Slint, Steve Albini, Isis and Sunn O))).

“There are so many ways to define influential in the context of post-rock,” says Chuter. “For this list, I’ve picked out 12 instances of when bands left behind the traditions of rock music but took their instruments with them. Guitar, bass and drums are still the implements of choice here, albeit for an entirely different utility.”

Chuter: “In the early ‘90s, journalist Simon Reynolds cited several examples of post-rock spilling out the back of progressive rock. One such instance was (No Pussyfooting) by ambient pioneer Brian Eno and King Crimson’s Robert Fripp. Eno throttled back the drive of progressive rock by feeding Fripp’s guitar into endless loops and obfuscating FX. It’s the sound of virtuosity eating itself; stillness achieved through a movement that gradually loses all meaning.”

“Rock doesn’t have to be a validation of ego and brutish machismo. Almost 25 years after its original release, Spiderland – the final album from this Louisville quartet – remains one of the most fragile and introverted rock records of all time. Guitars writhed beneath blankets of quiet, while bursts of dissonance sent panic attacks juddering through the album’s lyrical protagonists: a hideous monster, a shipwrecked captain, an anxiety-stricken house party attendee.”

“If the glamour and immaculate lighting of stadium rock stood at one end of the spectrum, then The Stars Are So Big… was at the other. Pram rattled around a house that was probably too small for them, with XLR leads strung across the floors and synthesisers perched on kitchen work surfaces. Instruments resounded within the dull acoustics of furnished living rooms and cramped hallways, while the compositions reeked of their restrictive environment – drumbeats bent into crooked 4/4s, lyrics arranged into zigzags of surreal imagery.”

“Even the most raucous rock record turns impotent with the volume turned down, but as Bark Psychosis’ Graham Sutton pointed out in an interview with The Quietus, “there’s no escape from silence, is there?” Hex was the ultimate testament to the potency of negative space. Doubt and self-reflection curdled amidst keyboards and translucent droplets of guitar, with shoegaze and dub reggae swirling around Sutton’s self-conscious vocal hush.”

“Labradford exploded the rock framework. Little fragments of plucked guitar and vocal melody floated upon tides of drone, like residual specimens of structure upon a landscape deprived of rhythm and a sense of passing time. The Virginian group were one of several bands (along with London’s Main and Texan outfit Stars Of The Lid) that melted rock music into ambience back in the early 90s, rewiring the instruments of catharsis into agents of meditation and sonic stargazing.”

“There are countless reasons why Millions Now Living is essential listening. The first is the 21-minute opening track, Djed: an incredible collision of runaway krautrock, tip-toeing dub reggae, spiralling electronics and tape manipulation. The second is how the rhythm section overthrew the dictatorship of the guitar, re-instating a democracy whereby all of the instruments played a vital role in pushing the album forward. Things got surprisingly dizzy without a guitar hook to act as an obvious focal point. Everything demanded the listener’s full attention, all of the time.”

“Now that Swans are back and making records again, it’s easy to forget how dramatically they bid farewell for the first time back in 1996. Soundtracks For The Blind was a monolithic work. It’s the diary of a band that left to become nomadic explorers of sound in all forms: field recording, disturbing tape sampling, transcendent drone, harmonic ritual. Amidst the panoramic territory that Swans scoped out during the record’s 140-minute running time, rock was a mere speck of dust, catching the light of audibility and then quickly vanishing again.”

“Arguably, it was Young Team that founded post-rock’s reputation for the loud/quiet contrast. There isn’t a Mogwai fan out there that can’t recall the first time Like Herod sent them tumbling out of their chair as the sudden detonation caught them unawares. Yet the mountains of distortion couldn’t exist without the canyons of poignant quiet in between them, and for every burst of fuzz and delay, there was a counter-balancing slump into solemnity and contemplation (most memorably, the lonely trundle of R U Still In 2 It?).”

“The initial objective of Trans Am was to take the sound of Van Halen and smash it into the biomechanical drive of Kraftwerk. That’s Futureworld in a nutshell. Not only does this record prove that keyboards can snarl and bite like guitars when the amplification is right, but it also manages to dodge rock’s big tendency to take itself too seriously. Even when the riffs and electronics turn fierce, Trans Am never lose their smirk of self-awareness.”

“Six minutes into Dans Ses Cheveux Soixantes Circuits, Fly Pan Am got stuck inside a chord that rings out for 12 minutes straight. The experience soon turned surreal, as every microtonal nuance scorched itself upon the back of the listener’s head. That’s the beauty of Fly Pan Am: behind the façade of echo-drenched rock was something much stranger and sonically obsessive, with bottomless potholes of repetition and hypnosis swallowing the listener whole.”

“As guitarist Takaakira Goto became increasingly competent at scoring for the orchestra, the presence of classical instrumentation started to flourish within the music of Mono. For My Parents marked the point at which his love for Beethoven engulfed his commitment to rock, with guitars and drums accentuating the impact of the violins rather than vice versa. It’s the most elegantly arranged Mono record ever, draining rock of its cathartic tendencies – for better or worse – in the name of a sophisticated, classical paradigm of beauty.”

GODSPEED YOU! BLACK EMPEROR – Asunder, Sweet And Other Distress (2015)

“Where their previous albums embarked upon sprawling narratives through drone wastelands and climactic summits, the structural premise of Asunder was far simpler: the destruction of rock and its dramatic rebirth. As the 6⁄8 groove of the first track collapsed, the album descended into a 16-minute stretch of scorched noise and violent decay. The subsequent recovery was miraculous, and the band rose out of the mire to finish the album with the explosive gallop of Piss Crowns Are Trebled. Violins and tremolo guitars detonated like celebratory fireworks overhead.”

Jack Chuter’s book, Storm Static Sleep: A Pathway Through Post-Rock is out on November 30 through Function Books. For more information, visit his website.