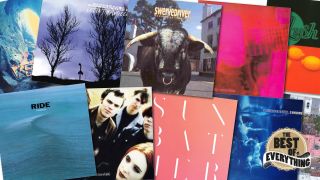 While it might have started off life as a music media in-joke, shoegaze became the toast of the UK indie scene in the early 90s. Its impenetrable wall of sound experimentation defined a much-referenced template and encouraged freedom and musical innovation – until the Britpop boom turned the head of many of the genre’s brightest stars in the UK, and grunge grabbed the attention of their US counterparts. While its tenure was relatively short-lived, its influence has been crucial to shaping modern rock music, and can be heard in everything from Radiohead to My Chemical Romance. It’s time for us to celebrate the scene that celebrates itself.

After their first two releases (mini album Scar, 1989 and debut album Spooky, 1992) were criticised for Robin Guthrie’s overbearing production, Lush seized control with second album Split. In charge of their own sound for the first time, Split finds them caught somewhere between the shimmering shoegaze of Spooky and the bouncy Britpop of Lovelife. The result is a deft mix of explorative, indulgent dream-pop underpinned by refined, confident pop-rock songwriting. Despite this, Split’s stand out single Hypocrite failed to break the top 40, and the band would implode two years later with the tragic death of drummer Chris Acland.

He might be best known for careening down a busy shopping street with gleeful abandon, but before topping the charts as Britpop posterboys, Richard Ashcroft and Verve were immersed in the shoegaze scene, and responsible for one of its finest records. Their debut album mixed uplifting melodies with intricate elements of the Madchester sound, resulting in an album of cavernous dream-pop – as depicted by the album’s artwork. While single Slide Away peaked at No.98 in the UK singles chart, it rocketed to the top of the US Indie Rock charts, which in turn earned Verve an invitation to perform at the Lollapalooza festival in 1994 and their sustained popularity in the US.

Founded by Rob Dickinson (cousin of Iron Maiden’s Bruce, fact fans) in 1990, Catherine Wheel were slotted into the nascent shoegaze movement thanks to their preoccupation with guitar pedals and the resulting shimmering soundscapes. However, as with many of their peers, it was a label they were quick to reject. Because of this, they would soon veer off in an entirely different musical direction, finding considerable success in the US with a heavier and more straight-forward alt.rock sound. Chrome finds them transitioning between the two, combining the dreamy wall-of-sound of debut album Ferment with the structured, crunching riffs of their latter-day alt.rock, and is all the better for it.

Black metal and shoegaze might not seem like the easiest of bedfellows, but Deafheaven silenced those who said it couldn’t be done with 2013 album Sunbather, and the subsequent advent of the blackgaze sub-genre. Merging black metal’s barbed brutality with the delicate nuance of shoegaze worked impeccably well in practise, and Deafheaven’s success as crossover artists in turn opened up black metal to a much wider audience. Latest album New Bermuda sees them relying more heavily on their black metal roots, but they continue to challenge the confines of both the shoegaze and metal genres.

Initially the solo-project of frontman Michael Feerick, when his self-titled, self-recorded debut saw him sign to Virgin, Feerick expanded his operation to a five-piece and decamped to Iceland to record his second album. The magnificence of their surroundings no doubt informed its soaring guitar hooks and lush, rolling soundscapes. Pre-empting the emergence of the nu-gaze scene of the early 2010s, this album’s success in Japan made them a global concern and resulted in Transatlantic success, as they relocated to LA to collaborate with Silversun Pickups’ Brian Aubert on third album Road Eyes. Still active and touring sporadically, this double album remains the peak of their creative output.

Released in May this year, Nothing’s second album places them firmly at the forefront of the nu-gaze movement, reintroducing shoegaze to a younger set of fans alongside Cheatahs, Ringo Deathstarr and Pity Sex. The three-piece all have well-established roots in the hardcore punk world, and harness that same buoyant spirit while unashamedly borrowing from the template carved out by their early-90s shoegazing counterparts. The result is something that is simultaneously nostalgic, fresh and innovative. Menacing, brooding, with fuzzed-out guitars and thumping aggression, Tired Of Tomorrow is a challenging, but rewarding, listen.

Having recently celebrated it’s 25th anniversary with a reunion tour and lavish limited edition reissue, Nowhere was not only Ride’s defining moment, but a defining moment for the entire genre. Ride took the shoegaze template and expanded on it, elevating their sound by combining the album’s expansive oceanic theme with pure pop sensibilities and astute songwriting nous. They carried on until the mid-90s, until eventually, like so many of their contemporaries, succumbing to the allure of the Britpop boom – guitarist Andy Bell would eventually join the Gallagher brothers in Oasis. Bell revisited the album 25 years on for TeamRock earlier this year, and you can hear him in his own words here.

Back in the 90s, Slowdive really weren’t cool. Liking Slowdive wasn’t cool. In fact, taking to the music press to rubbish them became a national pastime for their sneering cohorts, with Noel Gallagher infamously allegedly refusing to sign to Creation Records until they had been dropped, and the Manics’ Richey Edwards proclaiming “we will always hate Slowdive more than we hate Adolf Hitler”. Ouch. However, when Slowdive regrouped for 2014’s reunion tour, it became clear that the intervening 20-odd years had done wonders for their credibility. Souvlaki had become recognised as a seminal reference for any serious indie fan, and had won them a legion of fans who had missed the furore of the 90s. Despite their rocky start, Slowdive have become a veritable cult concern.

Emerging from the same Oxford indie scene as Ride, Swervedriver ensured they stood apart from their contemporaries by incorporating hard-rock riffing and fantastical storytelling into their sound. After the loss of two members following the release of debut album Raise, they came out swinging with the muscular Mezcal Head. Not quite a concept album, its songs weave intricate depictions of dusty American highways, alien abductions and romanticised images of early-90s Berlin. Swervedriver were one of many acts to capitalise on 2015’s renewed interest in the genre, releasing newest album Nothing Left To Lose to rave reviews, and resuming touring across the globe.

There can be no argument – Loveless is the definitive shoegaze album. Founded in Dublin in 1983, My Bloody Valentine formed from the ashes of various post punk bands, their influences ranging from Siouxsie And The Banshees to the Ramones and most everything in between. They developed a technique of cherry-picking the best from each genre, and in turn a sound that was unique – ethereal but highly defined, relying on Cocteau Twins-esque walls-of-noise and the sharp, punchy song writing of mid 80s Hüsker Dü. Loveless is the best and most coherent example of this pioneering style, combining honeyed vocals with relentless distortion for an end result as challenging as it was intoxicating. Its legacy helped to inform and shape decades of experimental music, from the template it created in the early 90s, to the burgeoning nu-gaze offshoot of the 2010s.

The 10 best My Bloody Valentine songs, by Failure's Ken Andrews

Swervedriver: I Wasn’t Born To Lose You