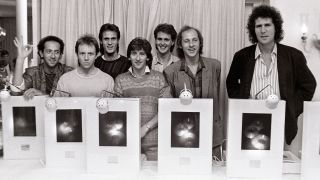 In November 1984, Mark Knopfler gathered Dire Straits at Air Studios on the Caribbean island of Monserrat to make their fifth studio album. Subsequently released on 13 May 1985, Brothers in Arms proved to be a cast-iron phenomenon. It topped the charts around the world and went on to win two Grammys and a Brit Award.

To date, it has shifted more than 30 million copies, not bad going for an album launched by a video of a cartoon fat bloke moaning on about MTV and Money for Nothing. This is a snapshot of how the eighth best-selling album in British recording history was made…

Ed Bicknell [Dire Straits manager]: “In the entire time I worked with him, I never asked Mark when the next band record would be. He’d tell me when he wanted to. In the run-up to Brothers in Arms he was making the soundtrack to the film Cal. We were driving up to the studio one day and got stuck in traffic.

"He turned to me and asked me to ring the guys up because he’d got some songs together. I remember going down to rehearsals and hearing Money for Nothing for the first time.

"When I was an agent I’d done a tour with ZZ Top and I was a big fan of that kind of fuzzy guitar tone that Billy Gibbons uses. I might be wrong, but I have a feeling Mark might have been listening to a bit of ZZ Top.

"I thought the song itself might be a bit of a hit, but no one could have foreseen what would happen with that album.”

John Illsley [bass]: “We spent a lot of time in rehearsals playing around with different ideas, so we were quite prepared by the time we went to Monserrat to start recording. Then we had a problem with the tape machine after three weeks of being there.

"Overnight, the digital tape machine decided to wipe something like 70 percent of all the stuff we’d recorded. This was the early days of digital and we had to start recording all over again.”

Alan Clark [keyboards]: “At that time, Monserrat was like Shangri-La. It was the most beautiful, peaceful place you could possibly wish to visit. We ended up getting Omar Hakim in on drums for that album and we cut the backing tracks in about a week.

"Mark wanted to listen to the drum track first and then we’d build the rest of the song up from there. Ride across the River and Why Worry were both done like that. We had a sense that Money for Nothing was going to be a classic guitar riff from the first time Mark played it.”

Ed Bicknell: “I also remember hearing Your Latest Trick out in Monserrat, which is the only the only song of theirs that I ever had any musical input on. It was originally played liked a bee-pop jazz number and wasn’t working, there was no groove. I suggested to Mark he try it as a bossa-nova and take one of the beats out, which is what they did. Walk of Life was not going to be on the record.

"I walked into the studio in New York when Mark and [producer] Neil Dorfsman were remixing the track and I hadn’t heard it. Mark said it was a B-side. I told him it was a hit song on a B-side and it should be on the album. It was actually a bigger selling single worldwide than Money for Nothing. Mark was a big fan of the Animals when he was a kid and he used to go and see them at Newcastle City Hall.

"Alan Price used to play a Farfisa organ and Mark was looking to re-create the sound of that on the front end of Walk of Life.”

John Illsley: “The Brothers in Arms tour was a big one that’s for sure. It was a realisation that the band had reached a point that was fairly unique and in the main we enjoyed it. We did the song Brothers in Arms as an encore and I got a shiver down my spine every night as we played it.

"I was talking about those times with Mark just the other day. You can’t go back and repeat that all over again: it’s best to leave those good memories intact.”

Sultans Of Swing: The Untold Story Of Dire Straits