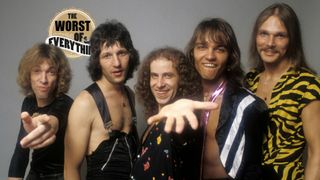 You gotta love Scorpions. The band’s earliest days, when they were forging a titanic Teutonic mix of hard rock and Hendrix, were spellbinding. The glorious triple whammy of the Lovedrive, Animal Magnetism and Blackout albums as the ‘70s met the ‘80s straightened the band’s sound, but not their attack. And they performed a human pyramid. All very laudable, but this doesn’t mean they haven’t recorded some terrible drivel…

Vocalist Klaus Meine works himself into a terrific lather on this number from 1993’s Face The Heat. But it’s an awful lot of fuss about nothing. To be fair, some of the guitar tones are quite interesting and Mathias Jabs pulls off a bizarre and technically interesting solo. But the song is filled with so much hot air that nothing can save it from drowning under the weight of its own pretences.

Pub rock taken at breakneck speed. The fact that this is a mercifully short version of the Elvis classic is the recording’s only redeeming feature. Taken from 1978’s awesome Tokyo Tapes double live, it’s hard to believe the band left this on and omitted the awesome original Catch Your Train, which was only included on a later expanded edition.

“You’re not alone in the rock zone,” sings Klaus on this tune from 2010’s Sting In The Tail. This may well be true, but you might find the place emptying sharpish were this being played. A staccato riff you’ve heard a million times before is only made worse by the embarrassing lyrics. “Bad girls keep a coming showing all the rest/What rock’n’roll girls really do best.” This from the band that wrote We’ll Burn The Sky…

Taken from 1988’s generally derided Savage Amusement album, this is the sound of Scorpions trying to get sonically clever by using sampled drums and voices. It really doesn’t work, mainly because the band lost any semblance of a melody for this one down the back of the sofa. The sound of a group wondering how to be relevant – and failing.

A strange piece of mid-paced confusion from 2015’s Return To Forever that feels less like a song and more a collection of disparate melodies, vocal tics and riffs dragged together kicking and screaming into the same recording studio. Nothing fits, nothing works and the forgettable chorus is beyond lazy.

1990’s Crazy World delivered Wind Of Change, the worldwide monster, monster hit. Which makes it all the more incongruous that this throwaway nonsense appeared on the same album. Wind Of Change may be cheesy, but at least it aspired to be meaningful. Kicks After Six wants to be nothing more than lowest common denominator rock. In that at least it succeeds.

Taken from ‘88’s Savage Amusement, this sounds like The Scorps trying come up with another re-tread in the Another Piece Of Meat, Don’t Make No Promises (Your Body Can’t Keep), Now vein. While it has undeniable energy and starts with a thrashing drum rhythm, it’s not nearly as good as any of its predecessors. This is Scorpions trying to write to a formula – and making a poor job of it.

An unreleased demo from 1980’s Animal Magnetism, American Girls finally appeared on the 50th anniversary edition of the album in 2015. Want to know why it never made the original album? Is the lyric ‘Their pina colada eyes are looking for love/They say, ‘Hey c’mon you guys, let’s have some fun’’ enough to explain it? I think so, don’t you?

This was originally written back in ’85 only to be scrubbed up for 2015’s Return To Forever. But a turd is still a turd no matter how hard you polish it. Sounds like some awful hybrid of ‘80s Bon Jovi chantalong vocals, half-hearted Marilyn Manson riffs and lyrics that only an eight-year-old could be proud of. There’s a reason this one never made the cut over 30 years ago.

A mess from start to finish. Confusion is too small a word for this track from 1999’s Eye II Eye. The tune starts off with some nice acoustic picking, then veers off into some faux-funk nonsense, chucks a bit of a ballad in, adds some truly dreadful neo-rap, and finally ends up with a lettuce-limp pop chorus. And to make matters worse Meine sings in German, while the rapping element is off-puttingly in English. A total head-scratcher.