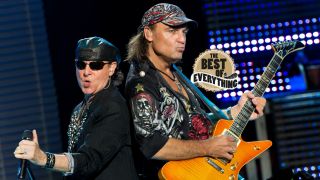 “Whatever happened to tunes you can whistle?” used to be a popular refrain for square fuddy-duddies who didn’t like any music made after 1955. Well, here’s 11 solid gold classics that pass the old grey whistle test with flying colours – not just grey…

GUNS N’ ROSES – Patience (GN’R Lies, 1988)
The Bad Boy of Rock from the Most Dangerous Band In The World, Axl channeled his inner Roger Whittaker on this soppy campfire strum that opens the acoustic side of the 1988 GN’R Lies EP. Axl’s plaintive, lovesick whistle must have been well-received, as he pursed his lips and blew out the American Civil War song When Johnny Comes Marching Home on 1991’s Civil War.

ROXY MUSIC – Jealous Guy (Jealous Guy single, 1981)
Bryan Ferry’s whistling in this 1981 cover of Lennon’s repentant wife-beater classic has its own fanatical following. Witness the essay on addisonrecorder.com entitled Bryan Ferry’s Whistle: An Observation On An Aspect Of Millennial Culture by Andrew Rostan: “As if the last human alive had only one final moment to express something real and true, had lost the use of his vocal chords, and was channeling every emotion into this controlled breath.”

PETER GABRIEL – Games Without Frontiers (Peter Gabriel, 1980)
“Whistling tunes we piss on the goons in the jungle,” sings the model for Simon Day’s spoof prog figurehead Brian Pern on his 1980 protest song (on the Top 5 single version, the lyric was amended to something about “kissing baboons”). Kate Bush embellished the backing vocal, but the massed whistling in the bridge was performed by Gabriel with his prolific producers Steve Lillywhite and Hugh Padgham.

STATUS QUO – Rock N’ Roll (Just Supposin’, 1980)
Francis Rossi hadn’t intended this to be a Quo song, and indeed in 1980 this gentle, reflective lighter-waver was quite a departure for the Frantic Four, with its abundance of synths and, of course, its winsome whistled melody. It’s easy to imagine this song as an early alarm bell for bassist Alan Lancaster, who would eventually leave the group in protest at their softer, poppier musical direction.

PAT BENATAR – Love Is A Battlefield (Live From Earth, 1983)
The NYC rock queen’s 1983 smash hit has so much high-impact musical drama going on you’d be forgiven for forgetting the whistled outro. It’s fair to say the whistling was an afterthought, but it added a level of eerie melancholy to the song’s shuddering comedown. “I knew she could whistle so I said, ‘why don’t you whistle at the end?’” recalled Pat’s co-producer and husband Neil Giraldo. “She said, ‘are you nuts?’”

DAVID BOWIE – Golden Years (Station To Station, 1976)
Bowie’s loose and funky 1975 single is taken up a gear right at the end by a brief, ghostly whistled coda, cueing the fadeout before disappearing back into the groove. It’s a surprisingly subtle and restrained whistle given the Thin White Duke’s rampant cocaine intake at this time; you’d be forgiven for expecting it to sound like an unsettled aviary.

XTC – Generals And Majors (Black Sea, 1980)
The quirky Swindon new wave four-piece took turns to see if any of them could whistle the catchy refrain of this sprightly 1980 anti-war anthem, but had to resort to technical trickery when the task proved too onerous. “None of us could really cut the mustard,” bassist/singer Colin Moulding admitted on an XTC blog. “The key was killing everybody, so I think we did it partly on a keyboard, and then mixed in Andy [Partridge, XTC singer/guitarist]’s whistling.”

FAITH NO MORE – Helpless (Album Of The Year, 1997)
As we’ve seen, there are two totally different atmospheres that whistling can bring to a tune: on the one hand carefree jauntiness, on the other moody introspection. Fittingly, Mike Patton brings out a little bit of both on this unorthodox highlight from 1997’s Album Of The Year. Helpless was scheduled as a single before being shelved when the band split up in early 1998.

THE BEATLES – Two Of Us (Let It Be, 1970)
A sweet, loved-up acoustic travelling ditty with a free-and-easy vibe, Lennon’s fun whistling at the end confirms and heightens the song’s aura of warm, relaxed spontaneity. So relaxed, in fact, that it sounds oddly reminiscent of the ‘hela heba helloa’ end of Hello Goodbye, suggesting that even the Beatles whistle Beatles tunes – even when they’re recording other Beatles tunes.

SUPERTRAMP – Goodbye Stranger (Breakfast In America, 1979)
Did Supertramp saxophonist John Helliwell accidentally leave his horn at home for this session? All he gets to do on this Wurlitzer-driven US Top 20 single is a sneeze-and-you’ll-miss-it snippet of perky whistling that perfectly sets us up for the infectious falsetto chorus. Always leave them wanting more whistling, right John?

SCORPIONS – Wind Of Change (Crazy World, 1990)
The irresistible whistled melody that tops-and-tails the Scorps’ heart-on-sleeve power ballad about the fall of Communism is virtually a narrative motif. Wind whistles, right? Ironically, when Wind Of Change hit number two in the UK charts in 1991, at number three was the world’s other greatest whistling song of all time: Monty Python’s Always Look On The Bright Side Of Life.