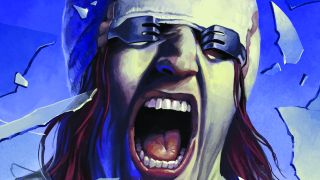 They’re Masters Of The Hook

“When I first got into Scorpions in the 80s, it was the catchy melodies and the heaviness that attracted me. They have simple grooves but it’s always melodic, with a powerful delivery. They went from being a 70s jam-type band and they morphed into this slick 80s metal thing, but did it seamlessly. They went with the times, but in a good way.”

“Rudolf Schenker is not a guitar player’s guitarist, if you know what I mean. But he’s a magician, coming up with all those songs, the chords and melodies and everything, song after song after song, for so many years. His brother Michael is probably my favourite guitar player of all time, so it was a killer combination when they were both in the band.”

“They must have been tremendously inspirational for German musicians, especially. To see a German rock band sing in English and conquer America, doing stadium tours, that must have been truly inspiring. It always takes one band to do it, and it was Scorpions. There’s a lot of great German metal, but somehow they managed to break onto radio on an international level. They have universal sentiments in the lyrics, too, that can appeal to everybody. It doesn’t matter if you’re a 15-year-old girl in Malaysia or some middle-aged guy in a Russian town, it just works.”

“One of the reasons I love them so much is the diversity of what they do. Like Sabbath and Judas Priest, they can go from big ballads to instrumental rockers to super heavy stuff, and they touch on a lot of different kinds of music. It seems nowadays you listen to one band for one particular sound and to another band for a different one. There seemed to be more diversity within a band in those days, and Scorpions could do it all. When a lot of people think about Scorpions, they just think of ballads and Wind Of Change. That’s the curse and a blessing of having hits, though.”

“I never thought I’d make it to 30 playing guitar for a living. Then I reached 40! The cool thing about rock’n’roll is that it’s still uncharted territory. No one knows when it’s time to pack it in! I really look up to that longevity. There’s something to be said for being the buzz band, but can you make it work for you for 40-plus years? Being hot is great but staying hot is truly impressive.”

Their Catalogue Is A Treasure Trove

“I discovered Scorpions through records like Blackout, but then I went back and listened to their early stuff. I was blown away by how ahead of their time they were and how heavy the production was on those old albums. It was really intense stuff. They combine great musicianship with great songwriting, and that’s not always the case. Usually you get one or the other!”