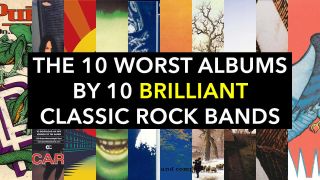 It's science. Newton's third law, to be precise: For every action, there is an equal and opposite reaction.

In the field of rock'n'roll, this means that for every Appetite For Destruction, Chinese Democracy is nothing but a cruel inevitability. For every Master Of Puppets, there must be a Reload. Don't agree? Blame Newton.

It happens to all of them, even the best. At one end of the scale, brilliance. At the other? Career-thwarting impotence.

Deep Purple - The Battle Rages On...

The aptly-titled last album recorded by the third coming of Deep Purple's classic Mk II line-up, although not much was classic about its contents. The opening title track was a barnstormer, with the band sounding as spiky and furious as they ever had, but from that moment on it was all downhill.

Eventually Ritchie Blackmore stormed out of the band for good, apparently referring to the album as "The Cattle Grazes On".

In the 90s, after Nirvana changed pretty much everything as far as rock music was concerned, a few stars of the hair metal era tried their hand at The Grunge Album. Mötley Crüe and Def Leppard had a go. And so did Kiss with Carnival Of Souls, on which they ditched the party anthems for a heavy, downbeat style similar to Soundgarden and Alice In Chains.

It was a strange turnaround for a band that had been cited as a major influence by so many grunge stars, including Kurt Cobain, the Melvins and Stone Temple Pilots. Moreover, the notion of Kiss as an alternative rock band was ludicrous. But in the end, a potential disaster was averted. In 1996, the release of Carnival Of Souls was shelved when the original line-up of Kiss reunited, in make-up. This album eventually snuck out a year later as a kind of ‘official bootleg’ deal.

Led Zeppelin’s Ahmet Ertegun-honouring O2 Arena reunion show was a triumph, final proof that, if necessary, Zeppelin could still do Zeppelin. Jason Bonham was an admirable substitute for his late father. Everyone had a terrific time, and the Celebration Day double CD (and DVD, and triple vinyl) provides the ultimate souvenir of the occasion for all that attended. Were they as good as they ever were? No, they were not. Obviously. The O2 gig was a triumph, the recording of it is a little less forgiving.

On Good Times, Bad Times, the appropriate opener, Robert Plant prudently takes his voice down a register – now those 1969 days are gone, he can’t quite scrape the raucous heights he used to vocally, certainly not over the long haul. Jimmy Page’s guitar is less susceptible to time’s fraying effects, but his playing isn’t exactly exquisite, more of a tremulous rumble, inexact in detail, slipping and sliding.

The gig’s head of steam is duly built up in its final furlong, with Whole Lotta Love and, finally, Rock And Roll, that most un-Zeppelin-like yet popular indulgence of nostalgia, in which the mood is one of palpable relief.

An accident where Alice Cooper fell from the stage in Vancouver on the Welcome To My Nightmare tour was a clear indication that the singer's alcohol consumption was having a dire effect on his career. And so it proved with his next album.

Goes To Hell is the nadir of 70s AOR rock, a bloated mess of over-theatrical radio-goo, cheesy ballads and disco. That’s right, disco. The only thing Alice got right about this album was the title.

Not so much ‘avoid’ as ‘buy last’, Emotional Rescue marks the Rolling Stones’ ill-advised immersion in the world of disco. Though it has to be noted a good five years after the rest of the planet. As Mick Jagger goes all high-pitched, self-grabbing and Gibbsy, it’s all the self-respecting Stones aficionado can do not to weep.

Dance (Pt. 1) is right up there on the rotten front as well, which is a shame as it marks Ronnie Wood’s only writing credit alongside Jagger and Richards. Some might say it sounds an awful lot like Led Zeppelin’s Trampled Underfoot… That said, Keith’s All About You is something of a classic and deserves better company.

It took a while to dawn on Pink Floyd that they were a great soundtrack band for their own increasingly spectacular light show. But their first foray into writing a film soundtrack is the aural equivalent of watching paint dry. It’s a disjointed series of mood pieces that may or may not have matched the scenes on screen.

It’s hard to know because the film, a bunch of nonsense about hippies in Ibiza, has wisely disappeared. If you’re desperate for crumbs then check out The Nile Song, Green Is The Colour and Cymbaline, songs that cropped up in their equally disjoined stage shows at the time.

It’s not that it’s bad, more that Christmas music has its two-week window before it’s blasted into oblivion for another twelve months by the Boxing Day sales. Ian Anderson is uniquely placed among rock musicians to do this well – he has the lightness of touch and a feel for the right mix of sincerity and humour – and his original songs are lovely. Every minute listening to it is at least 60 seconds spared from Merry Xmas Everybody.

“When the record company suggested we do a Christmas album, my immediate reaction was no, but I started to wonder if there was a way to do something not altogether cheesy and trivial," said Anderson. "So I came up with some variations on Christmas carols, looking at the ‘other side’ of Christmas."

Queen - Made In Heaven

A posthumous album, this featured vocal and piano parts recorded by Mercury in the months before had died. The tracks were subsequently finished by Brian May, John Deacon and Roger Taylor. While there was a lot of emotion invested in completing the album, it is nonetheless very disjointed and, at times, confused.

It’s clearly not a proper band album, and without Mercury giving his insight and input, the music suffers. There are occasional glimpses of Queen class, such as on A Winter’s Tale and You Don’t Fool Me, but overall it was probably more a cathartic exercise for the three remaining members than anything truly fulfilling for fans.

The second Bob Seger System LP is one of the most mysterious albums recorded by any major artist. Seger takes a back seat while another band member, the previously and subsequently unknown Tom Neme, contributes much of the material and sings lead on a series of flimsy pop-garage makeweights.

The album is a mess, and the nadir is reached with the wretched Cat, a startling, avant-garde hippie recital featuring six minutes of metallic percussion and aimless grunting. The urgent Death Row, a leftover from the Ramblin’ Gamblin’ Man sessions, is head and shoulders above everything else, but really only serves to highlight the album’s shortcomings.

Eagles - On The Border

The Eagles’ third album provided a major breakthrough with their first US number one single – acoustic ballad The Best Of My Love. It put the band’s career back on track following weak sales of Desperado. But on an artistic level, On The Border is the worst album the Eagles ever made.

It has three good tracks: The Best Of My Love, a great version of the Tom Waits song Ol’ 55, and My Man, on which Bernie Leadon pays tribute to the late Gram Parsons, with whom he had starred in pioneering country rock act The Flying Burrito Brothers. But the rest are poor – typified by Already Gone, a second-rate Take It Easy, and the ghastly homage James Dean.