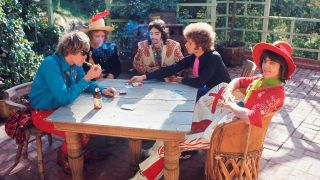 Are you ready for the country? So asked The Byrds in August 1968, with their album Sweetheart Of The Rodeo. On that, their sixth album, partly recorded in Nashville, they tackled songs made famous by Merle Haggard, the Louvin Brothers and others, alongside two country-centric originals from the band’s newest member, Gram Parsons.

The answer to The Byrds’ question, most emphatically, was: “No.”

Sweetheart Of The Rodeo bombed, having alienated both country followers and The Byrds’ core fan base. The album sold just 50,000 copies. The creative licence of the late 60s had allowed all kinds of musical hybrids to flourish: King Crimson brought heavy riffs to European classicism in the pursuit of prog; Fairport Convention gave trad folk a fiery electric jolt; Wendy Carlos brokered the worlds of Bach and electronica; Captain Beefheart took free jazz and blues way out beyond. But it seemed as though the marriage of country and rock was a step too far.

Country was viewed as establishment music, the soundtrack to straight-backed, conservative America. And in the age of student riots, Vietnam and civil unrest – with battle lines drawn between the counterculture and those in power – it represented the enemy.

There they set about realising Parsons’s vision of a place where gospel, soul, R&B, country, psychedelia and rock could co-exist, each genre informing and shaping the other.

“Gram had this idea of ‘cosmic American Music’,” says Hillman. “In the late sixties, when record labels were run by real music people, you were allowed to develop and experiment. Music had no rules back then. People borrowed from other styles. There was so much freedom.”

Released in February 1969, the Burritos’ The Gilded Palace Of Sin introduced the West Coast hippie aesthetic to juke-joint country. Most of the songs emerged from an accelerated creative spurt between Hillman and Parsons at Burrito Manor, a house they shared in the San Fernando Valley.

“It was one of the most productive times in my life,” Hillman recalls. “We came up with some of the best things either of us ever wrote – songs like Sin City, Christine’s Tune, Wheels and Juanita, which conjures up some wonderful imagery.”

Particularly striking were their covers of two Chips Moman/Dan Penn songs – Do Right Woman and Dark End Of The Street.

“Gram opened up these other areas to me: the real R&B coming out of Memphis,” explains Hillman. “For the Burritos to do Do Right Woman in a country style was pretty far-fetched at the time. But it worked so well.”

The album sleeve posited the Burritos as counterculture cowboys, a psychedelic posse of desert outlaws in nudie suits emblazoned with cannabis leaves, peacocks and flaming crosses. It wasn’t the only thing that confused the band’s potential audience.

The music did too. Despite a glowing review in Rolling Stone and the ringing endorsement of Bob Dylan, The Gilded Palace Of Sin was a commercial flop.

“It wasn’t slick enough to be on country radio, but the rock crowd weren’t quite ready for it either,” Hillman sighs. “It was too gritty and raw for most people.”

The Burritos were a far less focused playing live. Having brought in another ex-Byrd, drummer Michael Clarke, they lived hard on the road. Parsons, Clarke and Ethridge were particularly fond of booze, mescaline and cocaine, resulting in erratic shows that were either brilliant or forgettable.

An added distraction was Parsons’s burgeoning friendship with Keith Richards and the Rolling Stones.

“That’s when he decided to become a rock star,” Hillman laments. “Gram just wasn’t a person you could work with any more.”

Against this backdrop, the Burritos recorded a second LP. Burrito Deluxe, released in April 1970, lacked the intensity and ambition of its predecessor, although it still had its moments.

Guitarist Bernie Leadon, brought in as replacement for Ethridge, was an extra songwriting foil. This was best illustrated by the sublime Older Guys (co-written with Parsons and Hillman), while Parsons gave Lazy Days, one of his earlier songs, a chugging Stones makeover.

As a gesture of goodwill, the Stones gifted them Wild Horses, which eventually appeared on the Stones’ Sticky Fingers album.

Sales-wise, Burrito Deluxe did just as poorly as The Gilded Palace Of Sin. By July, Parsons’s recklessness had become too much. Hillman fired him after a disastrous gig in Los Angeles, for which he showed up at the last minute, drunk.

Hillman, who likens their final shows with Parsons to “the Keystone Cops crashing into a wall”, carried on with the Burritos for another couple of years before joining Stephen Stills’s band Manassas.

Frustrated at their lack of success, Leadon had already left to form the Eagles – which is where the Burritos’ true value started to become apparent. The Eagles smoothed the rough edges from the Burritos’ sound, ditched the pedal steel and aimed themselves squarely at mainstream America.

Their platinum-selling debut of 1972, featuring Take It Easy and Peaceful Easy Feeling, made country rock palatable for mass consumption. The Eagles’ Glenn Frey recalled studying the Burritos when they played at the Troubadour in LA: “We got to see them play live, watch what they were doing and check out the harmonies.”

Others followed suit, among them Linda Ronstadt, the Doobie Brothers, Pure Prairie League, and Firefall, who included Michael Clarke and another ex-Burrito, Rick Roberts.

Further down the decades, the Burritos were cited as a key influence on the alt.country boom of the early 90s; Uncle Tupelo, Whiskeytown and Wilco were just a few who acknowledged a debt. In the sleeve notes to a 90s reissue of The Gilded Palace Of Sin, The Long Ryders’ Sid Griffin placed its poor commercial showing into a wider cultural context: “Like the first album by the Velvet Underground, it would seem every one of those 50,000 [people] went out and formed a band inspired by what they’d heard.”

Chris Hillman summed up the Burritos’ legacy in Hot Burrito, co-written with John Einarson: “The Byrds invented country-rock. Gram and I refined it in the Burritos and the Eagles took it to the bank."