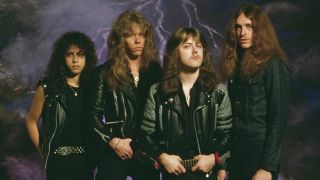 Master Of Puppets was the album that shunted Metallica from ‘most likely to succeed’ right up into the big league. Released in 1986, it sold half a million copies in its first year, became the first album by a thrash band to go platinum and to date has sold over five million copies in the US alone. People like it, then. But is it uniformly awesome? Let’s get down to brass tacks and go from worst to best…

What we’d now call an old school thrasher. No doubt the song’s great for banging your head to when you’re full of lager. But a cold analytical appraisal reveals that it lacks the usual earworm hooks that generally made Metallica stand out from their more mundane counterparts. Much of the song is forgettable, though it can’t be denied that vocalist James Hetfield’s barked “Back to the front!” – an ironic order directed at the cannon fodder addressed in the lyrics – has absolute authority.

Another song that comes dangerously close to filler. It feels like Metallica are treading water a little bit here. The riffs are passable but nothing more, and while Hetfield’s railing at TV evangelists seems to get him well worked up, it feels like there’s little of musical substance beneath the bluster. Don’t think this would make anyone’s Ultimate Metallica Spotify playlist.

6) The Thing That Should Not Be

Starts slow and methodical with a riff that Sabbath would be proud of, before Hetfield starts up with his ‘Messenger of fear in sight/Dark deception kills the light’ bit. Bet Metallica aren’t too proud of that couplet now. Yes, the lyrics are based on a story about a scary monster by renowned American writer H.P. Lovecraft. But that’s no excuse in my book. Not a bad grinder, but Metallica had done this type of thing better before, and would do it better in the future too…

The most successful out-and-out thrasher on the album. It starts with a typical piece of Metalli-calm, before all hell is unleashed in a brutal musical assault on the senses. ‘Fuck it all and fucking no regrets,’ howls Hetfield, leaving nothing in the dressing room as he drives himself to vocal exhaustion on the album’s final track. ‘Following our instinct not a trend/Go against the grain until the end.’ 30 years on it’s fair to say that Metallica weren’t kidding!

A big, traditional metal ballad about a poor soul trapped in a mental institution. It seems the lyrics are suggesting that the inhumane treatment of inmates in itself leads to their mental disintegration. ‘Kill it’s such a friendly word,’ roars Hetfield before the track flies into overdrive. The words aren’t particularly sophisticated, but the track most certainly is as Metallica prove their mastery of different tempos and moods, all within a single song.

Metal bands love a bit of medieval-sounding acoustic guitar. That’s the Ritchie Blackmore influence for you. Metallica are no exception here, but they soon move off into an epic sweep before quickly switching to a fast, taught thrash. What strikes you in these days of death grunts is how traditional James Hetfield’s vocal delivery now sounds. As someone who’s a bit ‘ho hum’ about sore throat singing, this suits me just fine. Blistering solos abound and as an opener, this is five minutes 12 seconds that could easily have been titled ‘Statement of Intent’.

Cliff Burton’s album favourite – and the much-missed bassist knew a thing or two about brutal rockers. The fact that this is Metallica’s most played live song of all time pays testament to its durability. Amazingly, the little pushes that appear throughout the tune do nothing to dampen the song’s groove right up to the point where the band break off and move into a slow, Iron Maiden-esque mid-section. They then rev up into a monstrous chug, and follow it with another insane-sounding solo. With so much shit going on, this should come over as a mess. It doesn’t. It’s magnificent.

Don’t take it personally James, but this instrumental is the song of genius on Master Of Puppets. Regarded by many as Cliff Burton’s finest hour – check out some of those bass runs – the song is masterful because it displays such human warmth in amongst the indisputable power – and that’s rare in the world of thrash. Once again, the band’s early Maiden influence is clear on the slow, almost chillout mid-section. But Metallica somehow take the component parts and make the song their own. Eight minutes and 28 seconds of pure magic.