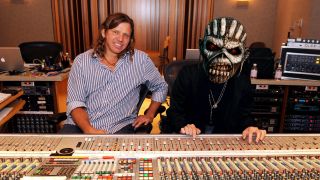 Kevin Shirley – a record producer also known as The Caveman – has produced albums for the likes of Aerosmith, Dream Theater, Rocket From The Crypt and Joe Bonamassa.

Along with bassist Steve Harris, he co-produced Iron Maiden’s 2000 Brave New World. It was their first album as a six-piece and marked the return of vocalist Bruce Dickinson and guitarist Adrian Smith.

We challenged him to pick 10 highlights from his time spent working with the band. “The term ‘epic’ is used way too much, and incorrectly,” says Kevin, “but all of these Iron Maiden songs truly are that…”

PASCHENDALE (Dance of Death, 2003)
Kevin: “Paschendale is a song based on the 1917 battle of Ypres during the First World War. You can feel the surge and the mud. This song has everything; it’s Iron Maiden in full flight.”

WHEN THE WILD WIND BLOWS (The Final Frontier, 2010)
“This song is just wacky. It’s written about a cartoon that Steve [Harris, bass] had seen [based on a 1982 graphic novel by Raymond Briggs] about a couple that mistake a distant boom for a nuclear attack. Steve was still working on the song when he brought it into the studio. As it was unfinished, everyone was learning it as we went – and it was not easy for anyone! It’s another epic track.”

BLOOD BROTHERS (Brave New World, 2000)
“This song epitomises the band for me – real brothers in arms. It’s great to watch the song performed live now, as a classic, and see the legions of Iron Maiden fans embraced as blood brothers too.”

THE LONGEST DAY (A Matter Of Life And Death, 2006)
“Here’s another epic song about the D-Day landings at Normandy during World War II. The thing with this band is that you really get to feel the emotional and physical elements that they represent in their performances.”

THE REINCARNATION OF BENJAMIN BREEG (A Matter Of Life And Death, 2006)
“This is of those tracks that intrigued me from the moment I first heard it!”

MONTSÉGUR (Dance Of Death, 2003)
“Iron Maiden have always written songs with historical references. This song was about the Cathars and the attack on their citadel of Montségur in France, where the religious community was massacred instead of renouncing their faith.”

FEAR OF THE DARK (Rock In Rio, 2002)
“The PA system had blown up the night before this concert. The band didn’t know about this, and went onstage with a non-functioning PA framing the stage. We literally recorded the show on four ADAT machines on the back of a utility truck. The crowd of 250,000 people all sang along, and because there was such a delay from the PA towers, I slipped the audience tracks to eliminate the audio delay when I mixed it – so you really hear 250,000 rabid fans singing along! It still gives me goosebumps and raises the hair on my arms when I hear it today.”

RIME OF THE ANCIENT MARINER (Flight 666, 2009)
“This movie was such a challenge to mix – only movie people determine the song list from an itinerary. ‘The first song is the first performance of the first song in the set, the second song is the second performance of the second song in the set…’ That makes zero sense to musicians who would just prefer the best performance, never mind the technical inadequacies: failing microphones, fever, out of tune instruments… In spite of all of this, the band deliver a sublime performance.”

THE BOOK OF SOULS (The Book Of Souls, 2015)
“The album’s title track is about the ancient Mayans and is over 10 minutes long. It begins with a majestic mid-tempo groove. Six minutes in and it explodes into a blistering horserace of a song! Bruce’s singing in the chorus has to be heard to be believed; I can’t squeak as high as that guy can sing in full voice! He truly is a freak of nature.”

EMPIRE OF THE CLOUDS (The Book Of Souls, 2015)
“At over 18 minutes, this is the band’s longest song ever. It’s the story of a British airship, the R101, which was built between the two World Wars and was so big that the Titanic would have fitted inside. The song features Bruce – the sole composer – on piano throughout, which is a first for Iron Maiden. The song tells the story of the airship: its heritage, its majesty, the flight and its tragic end. It’s like a mini rock opera, with lots of hidden gems in the music. Listen for the airship flying, the Morse code and the epic crash…”

Listen to the songs on our Spotify playlist. Iron Maiden headline Download in June. For more details, visit the festival’s official site.

Kevin Shirley – The 12 Records That Changed My Life