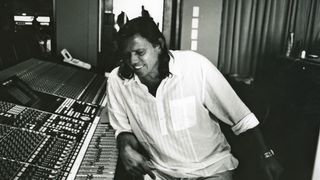 The combination of a stay in jail followed by the experience of hearing a new song changed the course of Kevin Shirley’s life, causing him to pursue a career in record production. While still in his teens and having just finished school, the South African native was traveling through Europe. Picked up in Amsterdam for riding on a train without a ticket or visa, Shirley was arrested and spent a week in solitary confinement. “It was terrible,” he recalls. “They had an old statute on the books that they can hold you indefinitely if they suspected you were going to ‘disturb the peace.’ It was a throwback to their Dutch East Indies days.”

Once he returned home to Johannesburg, Shirley experienced a “lightning-bolt moment” when he heard a song on the radio – Highway Blues, by a Capetown-based band called Falling Mirror. “I didn’t know the band and I had never heard the song before, but something about it just hit me,” he says. “I decided right then that I wanted to be a record producer.”

Shirley knew a thing or two about music – he’d served as the conductor for his school orchestra – but he didn’t have a clue about how studios worked. Fascinated by Highway Blues, he tracked down the studio in Capetown where the song was cut and tried to apply for a job that didn’t exist. “This guy told me they didn’t need anybody, and after he left I just sat in the reception area,” Shirley remembers. “The truth is, I didn’t have the money to go back home. Eventually, the guy saw me sitting there, so he agreed to hire me to do odd chores – making tea, painting the walls, filing the tapes. The pay was $190 a month. That was my start, and it was all because I heard that one song.”

Highway Blues turns up on Shirley’s list of the 12 records that changed his life, along with albums and songs by a disparate group of artists – everyone from Beethoven to AC/DC – including a few that he’s worked with over the years. “I think the criteria for a piece of music that changes your life is something that makes you rethink the path you’re on,” he notes. “In the case of that Falling Mirror song, it really did affect my life in a dramatic way. It’s really quite remarkable that a sound or a song can shake you up like that. I don’t think I’ll ever get tired of that feeling.”

Below, the mega producer runs down the 12 records that changed his life…

“I had a pretty sheltered childhood. I spent my early years at boarding school and didn’t really get to hear rock music until I was about 16 or 17. I got a cassette of The Song Remains the Same from an uncle, and believe it or not, that was my introduction to Led Zeppelin.

“I was immediately drawn to Stairway to Heaven. Then I went to see the movie and was completely floored. Getting to remix the whole thing years later and go through the multi-tracks with Jimmy Page and Robert Plant was pretty surreal. But it was very complicated and difficult as we weren’t allowed to touch a frame of the picture. The movie isn’t all live – sections of it are mimed – but it still translates beautifully. Check out the Blu-ray and new CD pressings for the mixes I did.”

“I recall hearing this as a kid, and I loved it. It was the first Peep Purple record I owned, and I think it’s one of the best live albums ever. I spun it to death. I would say this is the definitive lineup of the band – Ritchie Blackmore, Ian Gillan, Ian Paice, Jon Lord and Roger Glover. It doesn’t get any better than that.

“Quite bizarrely, much later on, I was asked to remix it. I absolutely didn’t think it was necessary, but I didn’t want anyone else to do it, so I did it. People have a tendency to clean things up too much and remove the color from the music, so I wasn’t having any of that. I think I managed to beef it up a little, but I didn’t really change anything. It didn’t need it – it was so special and unique.”

“I grew up with classical music, and this, the only violin concerto that Beethoven ever wrote, is one of my all-time favourite records. I remember lying on the floor in the living room at home, in Johannesburg, South Africa, with my head between my dad’s stereo speakers and just listing to this for hours.

“The version I had was Bernard Haitink conducting the Concertgebouw Orchestra of Amsterdam with Herman Krebbers playing violin, and it’s still my favourite performance and recording of this work.”

“Possibly my number one all-time favourite album. A perfect match of musicians, songs, direction and approach. I was at college when I first heard it, and it knocked me out.

“Even with some wacky edits, it still floors me that people can create such beauty. I’ve heard some of the outtakes from the record, and they’re just as good as the main album that was released. Everything about it is just outstanding.”

“Well, this was certainly a life-changing and important record for me. It wasn’t the first number one record I ever worked on or produced, but it was the first that succeeded in the United States. It sold oodles of copies – over five million. I went from just getting by and paying the rent to being well-off.

“Its success led to me accepted by some in the American record industry, especially John Kalodner. He called me a ‘superstar’ and went on to introduce me to Aerosmith, Journey and the Black Crowes. Things really started happening because of Frogstomp.

“What a cool record this was. I remember listening to it with my older brother, Don. We almost wore out the needle on the cheap record player in our bedroom, just playing the album over and over.

“I didn’t analyze why I liked it – I just did. It appealed to me. I didn’t like pop music, so I didn’t really know that these were pop songs played in a rock‘n’roll context. It sounded magnificent no matter where I heard it. The whole thing just gelled. The guitar work was brilliant. And what a surprise when one day Randy Bachman called me and asked me to make a record with him, Heavy Blues. The 16-year-old boy in me had to jump at the opportunity!”

“There was something about the sound that just got to me. The 12-string guitar and the harmony slide guitar – it was like mercury dripping down. The sound of those instruments affected me in a way that nothing else had.

“As I said before, hearing this song just stopped me right in my tracks. It made me want to investigate things more, and it led me to go find the studio where it was recorded, and that put me on my way to becoming a record producer. Very few pieces of music can change your life in such a significant way. This song did just that.”

Note: this video is only available in Australia, Canada, New Zealand and the USA. Spotify link.

“It’s easy to be too cool about this record, especially now that it’s a karaoke and bar-band favourite, but the first time I heard it, I was astounded by how brilliant and beautiful it sounded. And I still think it’s brilliant.

“I spent my last two school years at a strange alternative school, and one of my teachers lived on the property in a bungalow and played it for us, and I was amazed. The majesty of the song – it’s like lightning bolts went off in my head. The arranging, the guitar playing, the lyrics, the whole mood – it’s as perfect as any song can be.”

“I don’t remember where I first heard this album, but it still one of my all-time favourite rock records of all time. I love the songs, the sound and the mix. It’s groovy and energetic at the same time. The band didn’t have to kill it by playing fast. It could be down-tempo and still be tough.

“I wasn’t a fan of the band before this – I didn’t know the Highway to Hell album or anything like that – but I got into them after Back in Black. I can’t say enough about Mutt Lange’s production. You get the feeling of a band playing live, but there’s no way a band can sound like that. It’s a masterpiece of record making.”

“This is the first album I produced for Iron Maiden. To be honest, I was apprehensive about working with them. I seem to be the only boy who didn’t grow up listening to them, and so I didn’t know their music at all. And when they asked me to produce them, I wasn’t sure that their career had not run its course.

“But I am so grateful that they did ask me, as it began a very satisfying relationship of nearly 20 years now. It’s been so great to work with them, and it’s truly wonderful to see them more successful than ever, flying around in their own 747. Honestly, it could not happen to a nicer bunch of people. And by the way, they’re the best live act I’ve ever seen.”

“This record is so important to me because it began the most satisfying musical relationship I’ve had. I got a chance to work with this most brilliant guitar player, who was then marginalised and playing in a very niche genre, the blues. Together, we’ve managed to revitalise it and take it to mainstream, when no one else would touch it.

“I subsidized the budgets on the first couple of albums we worked on to make sure we had the best shot of breaking out of the corner of the bar, and it’s repaid me tenfold. More than that, it’s given me a chance to be creative with a brilliant musician, who, I also get to now call my friend.”

“An unbelievably brilliant mix of light and shade. It’s heavy, gentle, beautiful, rugged, muscular – and the most groundbreaking audio ever. I can’t say enough about how brilliant it is.

“Stairway to Heaven hit me first. I loved the development from a very pretty English-style ballad to a big, roaring rock song with a majestic guitar solo. It’s got everything you could possibly want. And then you’ve got Rock And Roll, which is just ferocious, and Black Dog and everything else. There’s not a single bad moment on the record. It’s magnificent.

“There was just something about Led Zeppelin – they did stuff that no one else could. And even when you think you’ve got them figured out, they’ll do something different, and it’ll work. They were utterly and unquestionably unique.”