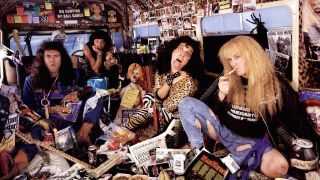 They were the Four Horsemen of the Rock Apocalypse, leaders and saviours of the wild ride to oblivion and ecstasy. They were Bad News, the best worst rock ’n’ roll band in the world, created by and starring Adrian Edmondson as “songwriter, leader of the band, singer, lead player, lead everything” Vim Fuego, alongside Nigel Planer as dimwitted guitarist Den Dennis, Peter Richardson as chirpy druggie drummer Spider Webb, and the much-missed Rik Mayall as posh poser bassist Colin Grigson.

Debuting on TV in 1983 with Bad News Tour, the low-key comedy exercise became a reality-straddling metal phenomenon when the four bewigged comedians played Donington Monsters Of Rock in 1986. In 1987 they released feature-film sequel More Bad News, recorded an album (produced by Brian May) and embarked on a full UK tour culminating in a show at Hammersmith Odeon supporting Iron Maiden, where they were joined onstage by Jimmy Page.

They were very metal, very heavy, and very Bad News. Here are 10 of their simultaneously best and worst songs.

The only time we get to see Bad News perform a full song live on film (starting at 23:10), this is probably the band’s most artfully inept moment, with hilariously tuneless chords, excruciating guitar harmonies and inane lyrics. After its ragged crescendo Vim introduces a song called Businessman, which has exactly the same intro.

9. CASHING IN ON CHRISTMAS

They set out to make the most brazenly nauseating Xmas single imaginable, and they succeeded. The ‘dub’ version from 1988 outtakes album Bootleg features the band arguing over the playback – and is therefore much better – but the video is worth seeing in its full, cheerfully annoying cut-price glory.

Key lyric: “Queueing up at Woolworths to get our Christmas hits/We’re after peace and love and joy and jingle bells on it”

More usually responded to with a chant of “Fuck off, Bad News,” this Status Quo-flavoured headbanger (opening with Queen’s Liar riff) is a call-and-response anthem highlighting the antagonism between band and audience. “Stop throwing things!” shouts Vim, as improvised projectiles bounce off of Den’s fret, adding “Oh God, this is stupid.” Still, the solo’s one of his best.

Kicking in at 9:26 (see the DailyMotion video at the top) we get to hear 50 seconds of this tasteful biker rock groove as the tour van traverses the motorway. As with other incidental songs in Bad News Tour, it’s not clear who’s playing the instruments (they’re suspiciously competent), and it’s probably the band’s only plausibly decent, non-comical song. It even made their Donington setlist (where Vim confirmed its title), and got a surprisingly good reaction.

Key lyric: “The fires of Hell on a motorbike/Beelzebub with a flick-knife”

Surely Bad News’ most epic riff, Bitch Hell Mother is a grinding sadomasochist doom dirge that Electric Wizard would be proud to call their own. A favourite of their live set, it was heard blasting over the end credits of More Bad News (see the DailyMotion video from 49:29), and it remains a mystery why Bitch Hell Mother was never included on an album - unless it was too good.

Key lyric: “I washed my face in the blood of my dead brother.”

“Written by F. Mercury but completely rearranged and harmonized by V. Fuego,” claim the liner notes – although on the promo trail in 1987, Vim was insisting he wrote it. Brian roped in Roger Taylor and even John Deacon to help on the ‘Galileos’, and after a raucous spot on Terry Wogan’s chat show the single very nearly dented the Top 40.

Key lyric: “No no no no, absolutely not.”

Key lyric: “Give me another drink Mr Bartender/If you don’t I’m gonna stick your dick in a blender”

The ingeniously-titled Masturbike has a relentless pneumatic grind, bloodthirsty shrieks (performed by Nigel Planer) and an irresistible headbanging tempo. Not too complex, you’d think, but on the Bootleg album the boys spend nearly 20 minutes trying (and failing) to get this song together. As Colin opines, “I know it’s heavy metal but it does have to be self-disciplined.”

The original seven-inch on Frilly Pink was disqualified from the charts when the band bought 350 copies, but this politically incorrect metal classic went on to become their signature song – impressive, considering they’ve got two songs with Bad News in the title. Built on a marauding riff and rousing singalong chorus, the album version adds a glorious sitar solo and Mongolian swordfight sounds.

The Young Ones' Vyvyan Basterd: The 6 Best Bands According To His T-Shirts