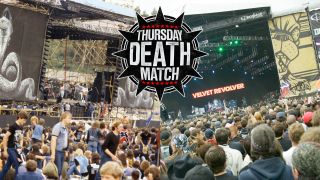 Back in 1980, a single day rock festival kicked off at the Castle Donington motor-racing circuit in Leicestershire. Fans boarded buses across the nation and descended on the Monsters of Rock site, drinking Ruddles County and braving the kind of conditions more usually associated with WWI battles on The Somme. These days, the same site hosts Download, a multi-stage, three-day event. The toilets are clean, you can buy free-range quinoa from a hundred different outlets, and every possible whim is catered for. But which is best? Paul Elliott prefers the former, and here’s why…

Monsters of Rock in its hetday. Pic: Getty Images

Can you name every band that played the Monsters Of Rock festival between 1980 and 1992? And more than that, can you place each and every band in the exact order in which they played on each bill? I can. And I often do, when I’m in the company of old rock fans, and the beer is flowing. No Googling required. This stuff is burned into my memory…

Fourth on at the first Monsters Of Rock in 1980, after Saxon and before the Scorpions? Easy. It was April Wine, purveyors of maple leaf mayhem.

I know this because, like every British heavy metal fan of a certain age, Monsters Of Rock was an event of mythic proportions.

As the first festival devoted entirely to hard rock and metal, it quickly replaced Reading as the biggest stage for the world’s loudest bands. And the place where it happened – at Donington Park, on a gently sloping field beside a racetrack, beneath the flight path of East Midlands airport – became a holy ground for headbangers.

This much is still true for the thousands of metal fans who flock to Donington every year for the Download festival. It’s still the place to be – for fans and bands alike. Download is, like Monsters Of Rock before it, the UK’s premier rock festival. The man who runs Download – Andy Copping of Live Nation – earned his stripes as a festival punter at Monsters Of Rock. And what Coppo has created with Download is a model modern rock festival. This year’s event proves as much. Across three days and four stages, there is something for every kind of metal fan: from contemporary rock heroes such as A Day To Remember and Black Veil Brides to old masters Kiss, Judas Priest and Motley Crue. But for all that Download offers, it can’t beat the old Monsters Of Rock. And there are two reasons why…

Consider the first Monsters Of Rock. The headliners, Rainbow, had just released the classic album Down To Earth. Judas Priest’s current album was the seminal British Steel; the Scorpions’ was Animal Magnetism; Saxon’s was Wheels Of Steel.

And so it continued throughout that decade, with so many bands riding high at Monsters Of Rock with albums that would define their careers and the era in which they were made. In 1981, it was AC/DC with Back In Black; in 1983, ZZ Top with Eliminator and Dio with Holy Diver; in ’84, it was the Crue with Shout At The Devil and Van Halen with – what else? – 1984; in 1985, Metallica with Ride The Lightning and Marillion with Misplaced Childhood; in 1987, Bon Jovi with Slippery When Wet; in 1988, Guns N’ Roses with Appetite For Destruction and Iron Maiden with Seventh Son Of A Seventh Son.

The second reason is all about collective experience. Rock festivals have come a long way in the 35 years since that first Monsters Of Rock. Now, the standard format is a three-day event with multiple stages – something that was first introduced at Donington in 1994. It seems almost quaint now to think of the Monsters Of Rock in its original form. One day, one stage. That was it. No frills – just six or seven of the best bands in the world. It was all so beautifully simple. And it meant that the whole audience – around 80,000, sometimes more – was completely united in the experience.

If you were at Monsters Of Rock in 1984, you saw David Lee Roth pull off an amazing flying leap off the drum riser as Van Halen played Jump. And in 1986, you saw Def Leppard drummer Rick Allen make his comeback after losing his left arm in a car crash – and you were a part of an ovation that moved Rick to tears. Nobody missed moments like these because they were watching some other band on another stage. The only people who missed anything were those unlucky sods passed out drunk or with sunstroke.

Monsters Of Rock was not perfect. There was one bill in 1982 that even now beggars belief. It was surely the most resolutely unglamorous line-up ever assembled on a festival stage – the last word in meat-and-potatoes gumby metal. Status Quo headlined. Below them were Gillan, Saxon, Hawkwind, Uriah Heep and Anvil.

But when I think back to my first Monsters Of Rock, in 1984, it still gives me goosebumps. It remains the best festival bill I’ve ever seen. And so, in time-honoured tradition, here it is. In ascending order, of course…

Motley Crue opened. Accept delivered a master class in homoerotic heavy metal (London Leatherboys, anyone?). Y&T I remember mainly for the daft ‘robot’ they had on stage – a roadie in the kind of cheap costume you used to see on Jon Pertwee-era Dr. Who. Gary Moore was still in his heavy metal phase, and was brilliant. Ozzy was in typically manic form. Van Halen had a drum solo in the second song but were still awesome. And to cap it all, there was AC/DC – a little past their peak, perhaps, but still the greatest rock band of all time.

Could Download ever top that? Not in a million years. But Andy Copping will keep on trying.

**…fighting the good fight on behalf on the modern Download Festival? It’s only Dom bleedin’ Lawson. **

Given my usual role as a middle-aged metalhead with a large and impressive collection of axes to grind, I do find myself almost legally obliged to proclaim that heavy metal was much, much better in the old days.

When I first got into metal in the early 80s, heavy metal was a simple but endlessly alluring thing. We had Maiden, Sabbath, Dio, Priest, King Diamond and Accept… and then we had Metallica, Slayer, Megadeth and the entire thrash movement. I don’t care where your entry point into metal was: those are all bands that have been fundamental to the refinement and definition of metal as a genre, and such is the atavistic nature of our scene that all of those bands – and their finest works – continue to be cherished and revered today but everyone from old cunts like me through to a sizeable number of young kids that have – Satan bless them – discovered metal through listening to idiotic tosh like Bring Me The Horizon.

We had no internet back then either, which meant that (a) we were far less likely to be erroneously and inexplicably accused of being paedophiles for daring to listen to something other than Kill ‘Em All every now and then, and (b) we were unable to steal music from the ether, which ensured that buying a new album was an event of monumental importance. These days, young folk /and/ plenty of old bastards seem to regard music as an entirely disposable medium. Which it isn’t. Or shouldn’t be.

So yes, metal was better in the old days and Bullet For My Valentine are ghastly. But when it comes to choosing between Monsters Of Rock and Download, I have to nail my colours firmly to Andy Copping’s mast (NOT LIKE THAT) and declare that the latter is by far the superior festival, for two major reasons.

Firstly, although Monsters Of Rock was groundbreaking and hugely important to the evolution of metal-centric live spectacles, both here and abroad, it was also a one-day event during which, at best, you could watch seven, six or perhaps only five bands strut their stuff while dodging large plastic bottles full of hot wee. No sane person would argue that Monsters headlining sets by the likes of Rainbow, AC/DC, Whitesnake and Iron Maiden haven’t passed into metallic folklore, and I don’t doubt for a second that the vast majority of people that attended the festival every year during its glory days had an absolutely perineum-splittingly good time.

But think about it… one day, five bands… and that’s it. Compare and contrast with Download, wherein you can see well over 100 bands (if you’re quick on your feet, at least) over the course of the weekend. Yes, Monsters Of Rock was a heavy metal festival through and through, but… one day, five bands, lots of airborne effluent. Them’s the facts and you’re welcome to them.

Back in the present day, it is, of course, enormously tedious when people start moaning online about how [INSERT PERFECTLY SERVICEABLE ROCK BAND HERE] are headlining Download and that “it isn’t a metal festival anymore”, despite the vast amount of evidence that Download was conceived as a broad rock-based festival and has never claimed to be anything else.

If the internet has proved anything, it’s that you can’t please all of the people all of the time because most of the people are preening, entitled idiots with no manners and a small vocabulary. Meanwhile, the reality is that the breadth and diversity of the Download bill ensures that all but the most curmudgeonly of rockular festival-goers are faced with an embarrassment of riches every single time they set foot on Donington soil.

Within that diverse line-up, of course, there will always some truly fucking shocking bands. This year, I’m particularly looking forward to missing the perennially woeful Godsmack, for instance, and I’m only watching Hollywood Undead because someone is paying me to. But not only is Download a highly professional and almost always slickly run affair, it is also a glowing advert for the way different rock, metal and “alternative” subcultures can co-exist and have a splendidly good-natured time.

If you want a hardcore heavy metal experience, there are countless other festivals. If you want to remain in the 80s and pretend that Korn and Pantera never happened, there are events for that too. But what would you rather spend your money on? Three days of entertainment with a ridiculous amount of bands on offer, very nearly half-decent food and a never-ending supply of lightly chilled booze or… well, you know… one day, five bands, face full of urine.

That’s not a festival. That’s a slightly overlong gig in a specialist night club. Download, on the other hand, is a euphoric gathering of the tribes. And, Satan be praised, the chances of having a cheekbone shattered by the wayward trajectory of a giant container full of steaming bladder-juice are much, much slimmer at Donington in 2015 than they were 30 years ago.

LAST WEEK: WHICH DEEP PURPLE WAS BETTER? MKII or MKIII?