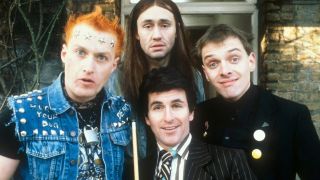 Ask Metallica circa 1986 their favourite TV show, they’d invariably reply “The Young Ones”. The anarchic student house-share sitcom was not only a game-changer for British comedy, it gave marginalised headbangers a chance to enjoy metal and punk band references on prime-time BBC. Our hero was Vyvyan Basterd, played by Adrian Edmondson (creator of that other 80s headbanging hero, Bad News frontman Vim Fuego), the maniacal medical student with ‘Very Metal’ scrawled on his cut-off denim jacket and an enviable array of vintage black t-shirts. Here are six bands Vyv took to his heart.

The cerebral Canadian proggers’ 2112 ‘starman’ motif seemed an unlikely fit for the orange-haired hooligan in 1982 episode Boring, but Neil Peart explained its meaning as “the abstract man against the masses,” so maybe it’s wholly appropriate. There was a recurring theme of the housemates ‘getting it wrong’ culturally, but Vyv’s Rush love is a way cooler mismatch than Rick’s disturbing Cliff Richard obsession.

Vyvyan was sporting the eye-catching cartoon sleeve for 1976’s Rock & Roll Over in the episode Bomb. As Vyv was a medical student–- primarily because it allowed him access to the morgue, where he could source fetching accessories for pimping his Ford Anglia, like a severed leg – we imagine his favourite Kiss song would be Calling Dr. Love.

This is the shirt Vyvyan chooses to wear when the boys throw a party in the episode Interesting, welcoming guests with Saxon’s sword-wielding 1979 debut cover image (he kept it on for the next episode, Flood).

With Rik and Ade both fans and friends of Lemmy, The Young Ones was loaded with Motörhead content. They famously play Ace Of Spades in the episode Bambi, plus the original script of the episode Nasty reveals an unused scene in which Vyvyan uses Rick’s hazelnut and mandarin yogurt to stick up a Motörhead poster. Vyv wears his No Sleep ’Til Hammersmith t-shirt in four of the 12 episodes: Demolition, Oil, Nasty and Sick.