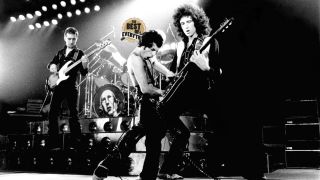 He was in the studio with Queen when they recorded ‘Bohemian Rhapsody’. His stamping feet can be heard on We Will Rock You. And he was in a hotel room with Freddie Mercury when the singer jumped out of a bath, wrapped himself in a towel, grabbed an acoustic guitar and wrote ‘Crazy Little Thing Called Love’ in minutes flat.

Peter Hince worked as a roadie for Queen for 12 years, from A Night At The Opera to the band’s final show with Mercury at Knebworth in 1986.

Here, he picks his top 10 Queen songs – and reveals which song Freddie thought was even better than Bohemian Rhapsody…

**10. KEEP YOURSELF ALIVE (Queen, 1973)
Peter: **“The first time I met Queen was when they supported Mott The Hoople in 1973. I was working for Mott, but I watched Queen’s set most nights. They only had the one album out, so they played pretty much all of it, and one of the songs that stood out was Keep Yourself Alive – a really great rock song.”

9. LIAR (Queen, 1973)
“Sticking with the Mott tour, I also loved Liar. Keep Yourself Alive was Brian’s song, Liar is Fred’s, and for me, Liar is Queen at their early, heavy best.”

8. DON’T STOP ME NOW (Jazz, 1978)
“This song has an amazing energy to it. And it really captures how Fred was at the time, when he was getting into the whole gay scene and just enjoying his life. There is that sense of unbridled joy in this song. The message is: I can do what I like.”

7. MAN ON FIRE (Roger Taylor, Strange Frontier, 1984)
“I think this is Roger’s best song. It didn’t appear on a Queen album. It was supposed to be on The Works, but it ended up on Roger’s solo album. And really, he should have let Fred sing it. I think if he’d gone with Fred singing, it could have been an even better song. I suppose Roger wanted to sing his own song, which is fair enough. But if Fred was singing a song, he would really get involved, and he wasn’t like, ‘Oh, I want co-writing credits.’ He was like, ‘It’s your song. But we can make it better – make it a better Queen song.’ Fred was very unselfish in that respect, and he definitely helped John and Roger. Just listen to the songs of Roger’s that Fred sang – obviously It’s A Kind Of Magic and Radio Ga Ga. You can hear Fred’s influence those songs, enormously.”

6. SPREAD YOUR WINGS (News Of The World, 1977)
“I liked a lot of John’s songs. The big ones, of course, are Another One Bites The Dust and I Want To Break Free. And people certainly had some funny ideas about Another One Bites The Dust. There was that rumour that John stole the bass line from Chic, which was complete nonsense. And someone even said that if you play the song backwards the lyrics say: ‘Smoke marijuana.’ Really? In the end, though, I think Spread Your Wings is John’s best song. I never cared that much for the power ballads like Play The Game, It’s A Hard Life or _Save Me _– those songs with really big dynamics, going from something like a lullaby into these huge crescendos. But there was something different about Spread Your Wings. It was like a power ballad, but it had more emotion in it.”

5. WE WILL ROCK YOU (News Of The World, 1977)
“This was a pretty important song for the band, and of course I always loved it because my feet are on it! The band recorded it in this big, cavernous studio, it was an old church, with a bunch of us stamping our feet on these big drum risers and having the whole thing all soaked in echo. It was great being an actual part of a Queen song. And I also loved the up-tempo version that they used to open the set with. That was phenomenal.”

4. NOW I’M HERE (Sheer Heart Attack, 1974)
“Live, this song was great, either at the start of the show or as an encore. That was the band at their rock’n’roll best – a three-piece with a singer. And so, so heavy.”

3. CRAZY LITTLE THING CALLED LOVE (The Game, 1980)
“The inspiration came to Fred when he was in the bath, and I had to rush off and get a guitar for him. By the time I got it he was out of the bath, in a towel. He took this battered old acoustic and just knocked out the chords. That was the thing about Fred – when he got inspiration, he acted on it. It was like this fleeting thing, floating in the air, and if you don’t grab it then, you’ll lose it. Crazy Little Thing Called Love is a great song, a turning point for the band, and I witnessed it being written, first hand. Pretty amazing.”

2. BOHEMIAN RHAPSODY (A Night At The Opera, 1975)
“I was there when it was recorded. I was there when the video was made. It was at the start of my time with them. Bohemian Rhapsody is Freddie’s masterpiece, and I feel privileged to have watched it come together as it did.”

1. SOMEBODY TO LOVE (A Day At The Races, 1976)
“Freddie always said that Somebody To Love was better than Bohemian Rhapsody – a better piece of songwriting. He felt that this was his best-structured song. The studio version is really good, but the live version was something else. They took it to a different level. It had real power and guts on stage. And whenever Somebody To Love was in the set, it just seemed to be a better show. It had something that lifted the whole band. It’s a very special song.”

Queen Unseen by Peter Hince is out now and published by John Blake in paperback at £8.99