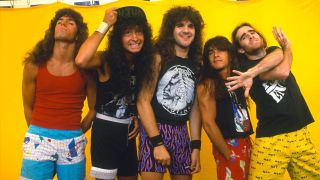 Silly surfer shorts. Nonsensical placards. And a ludicrous sense of humour. One could easily be forgiven for thinking that the Anthrax legacy to the story of thrash metal is nothing more than a few chuckles. But the reality is a little different, nothing represents this more than their stunning 1987 album Among The Living; hyper riffs, cranked vocals and songs that snarl and sparkle with a timeless zeal.

This, it could be argued, was as good as things got, not just for the New York crew, but also for thrash metal itself.

“It is a classic,” enthuses guitarist Scott Ian today. “Of course, I know what it meant to the scene – but more importantly, I appreciate what it did for us. We still play six songs from the record live. That says a lot about the impact.”

Despite the fact that this was the band’s third album [following 1984’s Fistful Of Metal and 85’s Spreading The Disease] at the time Anthrax were under little pressure to make any big commercial breakthrough.

“We were under no pressure at all,” recalls Ian. “We had no time limit for writing or recording. The way we worked back then, when there were enough songs for an album, then we’d go in and do it. We never wrote more than was necessary. In a way, I now regret that situation. We were on such a roll that perhaps someone should have persuaded us to carry on writing. Who knows what else may have come out? When you’re in that zone, there’s a lot to be said for staying in. I’m not criticising what’s on Among The Living, but we may have benefited from being a little less hasty in finishing up the writing side.”

Two of the songs had already been played live by the band. Indians and I Am The Law, [the latter based on the seminal comic book character Judge Dredd] were familiar territory to band and fans long before this album was released.

“We were doing them on the Spreading The Disease tour. Charlie [Benante, drums] had written the riffs really early on, and we put them in the set straight away. Actually, I Am The Law used some old musical ideas that came from our original bassist Dan Lilker, who also had a hand in one other song from the record, Imitation Of Life.

“The way we worked on Among The Living, Charlie wrote most of the music and I did the lyrics. It was the process we’d used on the first two albums, so why change it?”

Indians, in particular, captured the imagination of ‘Thrax fans. Unquestionably, one of their greatest ever moments, it was also something of a departure for them, taking a public stand over the treatment of Native Americans. Anthrax making a political statement?

“At school over here, you get a warped view of history,” says the guitarist. “You’re taught that there was a mutual respect between the white man and Indians. That we learnt from each other; wars were fought reluctantly and the Indians were always treated with dignity. Then you find out the truth. How the Spanish and English invaders had been attempting to wipe out the indigenous Indian population since the 15th century, and how we’d tortured, raped and pillaged. That’s kept from you in the education system. And that angered me.”

So, was Scott Ian inspired lyrically by Iron Maiden’s similarly themed masterpiece Run To The Hills, as has often been suggested?

“No way. I mean no disrespect to Maiden, but why would I need an English band to teach me about my country’s heritage? Musically, of course, Anthrax owe a lot to Maiden. But lyrically… never. They wrote in a way that I could never imitate. What really got me going on this song was an article I read in Time magazine about Indian reservations. How there was a huge drink and drugs problem, and how the suicide rate was very high. It truly shocked me.”

Another song with a sense of conscience was Efilnikufesin (NFL). On the surface it seems like a throwaway track, with some clever backwards touches. However, there’s a deeper meaning.

“We had a phrase in the band at the time: Nice Fucking Life. We’d say it without thinking. It was like the Scott ‘Not’ Ian thing back then. I took those words, and wrote the song about the late John Belushi, and how drug addiction had destroyed him. It did have a serious message. But we always knew that if we’d called the song Nice Fucking Life, then it would never have gotten radio airplay, and we’d always have to use asterisks in the word ‘fucking’. I think it was Charlie who came up with the idea of just reversing the phrase. We always laughed at how dumb people were – a lot of them never knew what we were actually saying in the song title! I still get journalists who ask me why we wrote a song about American Football! Just shows they haven’t bothered to read the lyrics, or understand the whole point of the song.”

When Anthrax recorded Spreading The Disease, they’d effectively produced themselves, although Carl Canedy [better known as drummer with cult New York metal trio The Rods] did help them out. But with a bigger budget for Among The Living, the band were determined to grab one of their heroes.

“We had Eddie Kramer top of our list,” recalls Ian. “We were all huge Kiss fans, and he’d produced so many of their best albums. Eddie had also worked with Led Zeppelin and Jimi Hendrix, so he was the man for us. You’ve also gotta remember that, at the time, everyone wanted the sort of sound ‘Mutt’ Lange had given to Def Leppard on their Pyromania album. It was released in 1983, and was still state-of- the-art three years later, when we came to do Among The Living. There was a real mania for over-production. But we didn’t want that at all. That’s why Eddie was the obvious choice. If you listen back to what he did in the 70s, there’s a raw, real live feel to his production. We wanted to keep everything right in your face on this record. We wanted to go against the norm of the time.”

Anthrax and Kramer spent six weeks at Quad Radial Studios, in Miami, recording the album. Then they upped faders and moved across to the seemingly luxurious location of Compass Point, in the Bahamas, to mix the album.

“Why did we go there? We’d seen photos of Iron Maiden mixing records at that studio – and if it was good enough for them…Chris Blackwell, the man who ran our label [Island], also owned the place, so we knew that we’d get it for a reasonable price as well.

“Everyone just assumes that we must have been living it up down there. No way! We stayed in an apartment block across the road from the studio. There was a woman who cleaned our rooms and cooked all our meals, and the local pub was just down the road. So, there was never any need to go into the tourist parts. We concentrated fully on the album. In fact, we were so focused that when we found out U2 were staying nearby, and had been seen in the pub, we were completely disinterested. Our attitude was, ‘We’re here to make an Anthrax album. If we happen to bump into them, then OK. Whatever’.”

Relations with Kramer, though, began to strain when the mixing started.

“At first, working with Eddie was amazing. He’d sit around and tell us these great stories about all the people he’d produced. But then we hit real problems. As I said, we got him because of the classic Eddie Kramer sound. But when we got to hear the first track he mixed, we were all in shock. The vocals had tons of reverb, the guitars were washed out… he’d tried to make us sound like fucking Def Leppard. We were being inspired by his past, and all he wanted to do was follow the trend of the time.

“We had some furious arguments with him. At one point he said to me, ‘Is your opinion God?’. I replied, ‘No, I’m the rhythm guitarist in Anthrax. But this is our album. It isn’t Eddie Kramer with Anthrax, or Anthrax featuring Eddie Kramer. It’s fucking Anthrax. This record has our name!’.

“We came down hard on him. Every time he’d play us a mix, and we’d hear the slightest reverb on the drums, it would be: ‘No, we want the drums to sound dry, dry, dry. Throw the effects pedals into the ocean’.”

Despite the troublesome relationship between band and producer, Ian insists that there was never any talk of sacking Kramer.

“No, in fact if anything it helped. We got so angry with him that all of us were fired up, and I think you can hear it on the record. There’s an edge which came from these disagreements. If anything, we speeded up the songs because of these confrontations, and got more extreme.”

Altogether, Anthrax spent eight weeks working on Among The Living.

“On Fistful Of Metal we’d had three weeks all told, yet took six months for Spreading The Disease. But with the latter we were also looking for a singer [Joey Belladonna, who eventually replaced Neil Turbin]. Now, we take about the same length of time to record as we did on …Living. I can’t understand why bands want to spend any longer. It bleeds the soul and passion from the songs.”

Among The Living – both the album artwork and title were inspired by the Stephen King novel, The Stand – was released in April 1987, peaking at number 18 in the UK charts, and a respectable 62 in America. Eventually, it sold well over half-a-million copies in the States.

“It set us up,” enthuses Ian. “Because of its success, we got to do Donington in 1987; things were really pushed forward. I guess that’s also the time when the phrase ‘The Big Four Of Thrash’ was invented. Ourselves, Metallica, Megadeth and Slayer were all about the same age, and all around the same stage in our careers. It was a time when the whole thrash thing really took off, and I’d like to think that Among The Living helped.

“What did the album mean to Anthrax? Everything. It wasn’t just an important moment in our career. It gave us a career!”