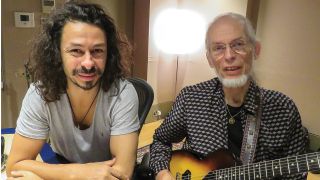 All\u2019s In A Chord: Virgil and Steve Howe

Steve Howe has teamed up with his younger son, Virgil, on a new instrumental album, called Nexus. It’ll be released via InsideOut on November 17 and, says Steve, the recording will surprise a lot of fans.

“I’ve done a wealth of different things but I haven’t done anything like this before. I feel it’s steering me in a different direction,” he tells Prog via the phone in the US, where Yes are currently on tour. “It’s a full-on collaborative album, not a duet. It’s been refreshing to work with Virgil and we’ve pulled this beautiful album together. Although it’s got shades of mellow music, it doesn’t sit still. It moves across electronic music and my guitars – this is an opportunity to discover what Virgil’s been doing on the side of his drumming with Little Barrie. He’s got a hard rock and funk side but this has totally different shades.”

The idea for the recording came about last year and is based around piano and synth pieces that the rock drummer has been sending his dad over the last few years. When Howe Sr realised the tunes weren’t being used anywhere, he picked out his favourites and added guitar parts, which Virgil then reworked into full songs.

“I tried to bring a different style of guitar, both in the instrument and the styling of my guitar work,” he explains. “Some have my famous ES-175 sound, for others, we moved onto acoustic guitars and used things like Dobros. I got the colourful guitar approach onto the album, that’s what I call guitar texturing. Virgil then brought in more orchestration and that started building the strength of the album. I would say it has a current feel. We didn’t need anyone else, we didn’t need anything else – that’s why it’s just Virgil and Steve Howe.

“Most of the credit goes to Virgil on this; it’s Virgil’s bed and melodies but I’ve come in to add a little bit more. The proportion that he wrote is reflected in the way that my name is second on the writing and the performing because he’s the one putting the big stamp down here. What I like about [the songs], and the reason I’ve put this together, is that he has a melodic virtue in his music and that’s something I can never ignore. When somebody comes to you with a tune, it’s a tune – it’s not a hodgepodge of ideas or beats, it’s actually a tune and I think that’s a great strength he’s got.”

Although Virgil’s synth playing can be heard on Howe’s Spectrum, this is the first time the pair have fully collaborated on a studio album. The finished recording comprises 11 instrumental pieces with spacey titles such as Passing Titan, Moon Rising, and Dawn Mission – which at just over five minutes, is the longest track on the album. Then there’s Nick’s Star, a song that Virgil wrote in memory of the guitarist Nick Hirsch, his bandmate in The Dirty Feel, who died in 2012.

“Virgil played it to me and asked what I thought. I said, ‘I think it’s beautiful and let’s play on it’,” reveals the Yes guitarist. “All the titles are slightly cosmic because that’s the kind of music it is.”

In addition to Nexus, Steve Howe has recently released Anthology 2: Groups & Collaborations via Rhino. The three-disc collection spans more than 50 years of the guitarist’s career.