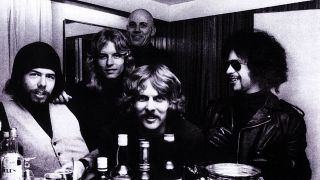 Asked if Spirit were a progressive rock band, their peak-era bass player Mark Andes has no hesitation. “In retrospect I see us as being one of the first progressive bands,” he says. “By including jazz as well as psychedelics in our style, among the various languages we used through the songs to communicate, we were definitely progressive. We didn’t call ourselves that, back in the day, and it took a while to have that perspective. But yes, I’m sure we were.”

Even in an era when many West Coast bands were pushing the envelope, Spirit subverted the formula. There wasn’t a master plan.

“We just blindly fell into our distinctive sound because of the diversity of influences and our willingness to fearlessly launch ourselves anywhere,” Andes says. “I mean, I listen to some of the stuff we did and I can hear my young self trying to sound like a jazz musician, not quite understanding the depth required! Then I hear other sections and I think: ‘Okay, this is where I got it.’ I can feel myself inhabiting the improvisations that John Locke [keyboardist] brought to the band, the jazzier side.

“Randy California [guitar/vocals] was a virtuoso, a prodigy, and Cass [Ed Cassidy, drums] was pretty fluent in that side of things. So it remains one of my proudest times, perhaps the ultimate.”

The friendly, laid-back son of actor Keith Andes (who appeared in films opposite Marilyn Monroe and Barbara Stanwyck), Mark grew up in LA. He’s happy to see the release of a Spirit box set, It Shall Be: The Ode & Epic Recordings 1968-1972, a five-CD collection gathering their early albums and other pieces. There’s plenty to admire in it, the music more often than not matching the ill-fated band’s intriguing mythology. Undoubtedly the pinnacle is the 1970 album Twelve Dreams Of Doctor Sardonicus, which strides boldly across genre barriers to create a dizzying kaleidoscope of beautiful noise. Featuring Spirit’s best‑known song, Nature’s Way, it addresses big themes like humanity, mortality and environmentalism – and uses a Moog to boot.

“Yeah, that one is special,” agrees Andes. “It’s not only the most successful and iconic of the Spirit albums, it’s also Randy’s masterwork, his most wonderful statement.”

Randy California died in 1997, and Andes and Jay Ferguson [vocals/ percussion] are now the only surviving members of the original Spirit. Ferguson was unavailable for interview as his home was caught up in the Santa Barbara mud slides. He’s now a soundtrack composer, his successes including the theme to The Office: An American Workplace and NCIS: Los Angeles. His 1977 solo hit Thunder Island enjoyed a revival in Anchorman 2.

Pondering the loss of the rest of his old bandmates, Andes mutters, “Yeah, they’re gone…” After a pause, lost in reflection, he says, “Wow.”

Everything about the Spirit story is worthy of a wow. They’re the very definition of a legendary cult band scuppered by drug abuse and volatile personalities, but even outside that, they ran into a headwind of bad luck.

From the off, weirdness abounded. The teenage Randy Wolfe, who must have thought he had the ideal, watertight name to be a flamboyant rock star, played in Jimmy James And The Blue Flames with Jimi Hendrix – only for Hendrix to insist he took the stage name of Randy California (based on where he came from).

When Hendrix left for London, he wanted California to come along, but Randy’s parents insisted he finish school. Still only 16, he joined Spirit, whose drummer was his stepfather, Ed ‘Cass’ Cassidy. Andes, Ferguson and John Locke made up the quintet, who were signed by Lou Adler in 1967.

Cassidy, already in his 40s and an authentic beatnik, had played with everyone from Art Pepper and Cannonball Adderley to Roland Kirk. Earlier in the 60s, he’d formed Rising Sons with Ry Cooder and Taj Mahal. Locke’s mother was an opera singer, his father a classical violinist. Andes had been a teenage member of Canned Heat, before that band was signed. It’s safe to say that Spirit brought together a mercurial multiplicity of influences and aims.

“It was a special time and we were right in the arc of that moment,” recalls Andes today. “Spirit started spontaneously – we were one of the more ‘real’ bands. And Randy was the reason we existed, the keystone. He was just a kid, a prodigy, and we were blown away when Jay’s brother found he wanted us to play with him.

“It started in this funky little bohemian house in Santa Monica, where Cass and Randy’s mother Bernice and his sisters lived. Cass was an honest-to-God old hipster, back when Venice was beatniks and poets and musicians. We’d come in from the San Fernando Valley and rehearse and discuss things. I was ‘the surfer dude’!

“It was a magical time, very cool. Randy’s uncle owned one of the venerable folk/blues venues, The Ash Grove on Melrose. Rising Sons had been a big band in LA, and we had contemporaries like The Byrds, Kaleidoscope with David Lindley…”

Things began well enough, with albums like The Family That Plays Together and Clear, and the soundtrack to Jacques Demy’s film Model Shop mildly warping the West Coast sound. But by the time they reached their glorious out-there pomp on Twelve Dreams Of Dr Sardonicus, trauma and tension were rife. The band weren’t getting the big shows they felt they deserved, and the lack of commercial success was niggling, with Randy’s behaviour and mood swings becoming erratic.

“It broke Randy’s heart, really,” says Andes. “The sad thing was he had the responsibility of being the family’s provider. Then after Jay and I left because of his idiosyncratic behaviour, he got a head injury while we were making …Dr Sardonicus.

“Looking back, I wish we’d had the skills to help Randy through that period, rather than just running away from it. Jay and I leaving really dealt a blow to the band. Not having success, okay, but for Randy, well… it would’ve been so much nicer to make some money. We were all in debt.

“I remember we were scheduled to tour Japan. This was a big deal for us; we were so excited. But the night before we were set to fly, Randy informs us that he doesn’t want to go – it’s off. Instead of confronting him and making an intervention of some kind, I just thought: ‘I can’t allow this person to control me like this.’ And it brought up issues within me that took a long time to resolve.”

Spirit were later to reform in various incarnations, but they were a wounded beast. Andes says he urged the guitarist to give Spirit a rest and “get working on your solo thing – how can they miss you if you won’t go away? But… it just didn’t work out that way.”

California was troubled even as …Dr Sardonicus brought its prescriptions. David Briggs, famed for his work with Neil Young, had been hired as producer. He was a forceful character, and his affair with Andes’ girlfriend while the band were on the road didn’t help the mood music.

“Randy blossomed as the main writer, but Jay and I felt disenfranchised in the process, like the project got hijacked away from us. Randy and John and David were going off in their own direction. You could see cracks in the veneer starting to appear.

“What really made things dramatic was Randy’s accident. He fell off a horse, which he was riding on a paved street. Fell and fractured his skull, got a concussion. Anyway, he didn’t follow doctor’s orders, and we were all doing a lot of drugs and psychedelics. And a lot of coke back then. A lot. So it was a highly charged time, and I’m not sure Randy’s wiring came back altogether. So not only was there all this drama, but we happened to be making a fucking brilliant record! One of those peak energy things, I guess…”

So did the drugs help or hinder the creativity?

“When it came to recording, we… I was going to say we were a little more responsible, but no, we weren’t [laughs]. It was just an ongoing deal, the drugs. Not that we were the most drugged-out band I’ve been in, to be honest. But we… weren’t afraid to indulge. We were just regular pot-smoking, psychedelics-taking, coke-snorting guys! It worked on the record, but it might have broken the band up, is my sad insight.

“Jay and I put the band Jo Jo Gunne together, had a hit with Run Run Run, and then I got fired from that during the first tour. From my own band! Because they didn’t like my girlfriend! Talk about a Spinal Tap episode…”

The residual Spirit split in 1973, but California, Cassidy and others revived the name later in the 70s. This fell to pieces after John Locke invited Neil Young to play guitar on an encore, and California, sensing his turf threatened, shoved Young offstage in full view of the audience, infuriating Locke.

California stumbled on, both solo and as Spirit, but drowned in a surfing accident off Hawaii aged 45. His name was in the news recently as the Spirit estate took out a court injunction against Led Zeppelin, claiming Stairway To Heaven ripped off California’s track Taurus from their debut album. Zeppelin had supported Spirit in ’68.

Page and Plant won the case but an appeal is imminent. Andes says it was “crazy being in the courtroom with Robert and Jimmy. Oh yeah, we used to hang out. But they didn’t remember. It’s cool, I’m a fan.”

Andes has had a successful career, spending a decade with Heart and playing with Colorado band Freefall too. He’s been asked to put together an all-star Spirit tribute for some festivals, and is mulling it over with friends from Eagles and Doobie Brothers.

“Maybe if we can do it justice,” he says. “I’m honoured to have had the Spirit experience. We cared so much about the music that we’d have these confrontational group therapy sessions and really get into each other’s spaces, but in a holistic way. There were a lot of emotions. And then the switch went off. But it was always good when we got back together.

“I’m excited if this box set spreads the word and exposes more people to Spirit’s music. It opened up my mind early on in my life, set things in motion, and I embraced it. I feel Spirit really did accomplish something.”