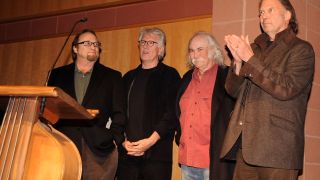 Neil Young has an axe to grind.

**Did the idea for the film come out from the same impulse that inspired Living With War? **

Well, when the record came out and then we got the reaction that we got for the record, which was kind of violently good and violently bad at the same time, and personally attacking, also personally praising. I figured it’d be interesting to take it on the road but I didn’t know who to take it on the road with. I wanted to take it on the road in a way that it would have the most impact. I could choose who I was working with, so I chose Crosby, Stills and Nash because they have a history of doing this kind of thing what with Ohio, Military Madness, For What It’s Worth, Déjà Vu, Long Time Gone, Teach Your Children, so it would have a lot of roots. AndI became acquainted with Mike Cerre, and I asked him if he would like to come on the road and embed with us on a tour, since he was an embedded correspondent in Iraq.

He was a war correspondent for a network?

He’s a freelance. We wanted original video from Iraq and he had some. He’d heard Living With War, and wanted to do a special for MSNBC or CNN or somebody: a half-hour special on the war and the music, and what the troops thought, etc, because he’s been to Iraq five times. I said to him, “Listen, I don’t want to do that TV show, but why don’t you come with us and we’ll make a movie? You bring your cameras. We’ll shoot the music and you shoot the doc, and then we’ll give you the music. And you’ll cut together 10 episodes for me. And than after that I’m going to take those and I’m going to do whatever I want with them.”

Stephen Stills is a Texan and from a military family himself. And at first, he was the most resistant of CSN about joining you on this tour…

Well, despite his exterior, Stephen doesn’t like people not to like him. He’s much more sensitive than you’d think. But he’s great. He’s a very important part of the movie. He’s the most articulate one of all of us. He speaks the best and he has the most depth.

He shows his human side more than anyone else in this film. Not only by what he says, but when he fell onstage.

It must have been humiliating for him, but you put it in the film. Why?

It’s not as if I didn’t warn him. I showed it to him and he seemed okay with it. I mean, the more uncool we were, the more real we seemed. And we were very real. I’m more myself with these guys than I am with anyone. We’ve had 40 years to perfect that.

You were so driven to make the Living With War album, and this film. Why did this speak to you more than other things, like Desert Storm?

Desert Storm made more sense to me. Saddam invaded Kuwait. People were killed and all kinds of things happened. And it’s dirty over there, and we’re involved in dirty ways. But this was pretty straight ahead. And the elder Bush had the brains to not go too far. A lot more intelligence. So this war was more like the Vietnam war, it started, you couldn’t tell why. Which is shadow line.

Will your film help end the war?

Ideally, we do want to end the war. I just am pragmatic, and this war has a cause. The cause of the war is energy. So that’s what my programme is now. I’ve reacted to the war and I wrote these songs, and it stimulated a conversation but it’s not going to end the war. So I think people should start focusing on a solution, and a cause, and how to eliminate the root causes of war and the energy problem. That’s why I’m doing my thing building this car [see boxout] because it’s an illustration of what we can do. And I’m not the only one who feels this way. I’m just one of a crowd of people, but I’m going to do it, because I think it can make more difference than any song I’m going to write.

First off, I don’t think I’d ever do it again. I don’t think I would do a political statement thing like this about a war. I’ve made my statement not only about this war but about all wars with this one. So going out into public forum and speaking about politics and war and matters on that level is something that I won’t attempt again. I think that was a very rare instance for me. I was so exhausted and so burned that I actually went to Hawaii for three months, and just stayed there. Just stayed there for three months trying to wash myself off.

**When you chose to mount the Free Speech Tour with CSN did you worry that old wounds would come back to haunt you? **

We’ve always loved each other. We always had fun, and we’ve always fought. And we’re just older now, and we don’t do any of those things as much. We have arguments, but we love each other. We’ve been together for so long, we’ve been through so many things. And I’m sure there’ll be another CSN&Y tour.

Did you think about using Crazy Horse – they’re so much more of an aggressive outfit and some of the songs were so forceful?

Crazy Horse would not fit with this music. Well, maybe on one song they’d have been okay. But that feeling comes from another place inside, it just wasn’t going there.

Aside from his music, Neil Young is working on the most environmentally friendly car out there. In fact, he’s going to make a movie called Lincvolt about it. “That’s what the car is called,” he explains. “It’s a Lincoln, powered by electricity and biofuels and possibly by water. I was driving it last week, under electric power, 70 miles an hour. It’s unbelievable,” he explains. “You can hear other cars coming on the freeway. You can hear just a normal car coming. You can hear the engine. Cars make a lot of noise when they’re 60, 70 miles an hour, but this car makes less noise than all the other ones. You just hear wind. It’s really, really clean.” For more info, stop by www.lincvolt.com