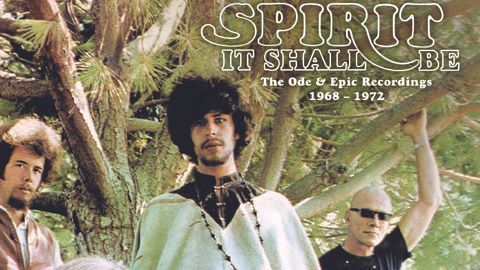 Living in the age of the digital cornucopia listeners are used to be able to hear anything at the click of a button is something we’ve quickly grown accustomed to. But it wasn’t always like that. When Time Circle 1968 - 1972 was first issued in the early 90s, the West Coast outfit, whose electric creativity sparked between psychedelia, pop, jazz and proto-prog musings, had fallen into relative obscurity, with only one of the four albums featured on the two-disc compilation being in print at the time. The fact that Spirit never quite fitted into an easily understood pigeonhole perhaps explains their relegation to rock’s margins. The straightforward reissue of Time Circle and Esoteric’s five-disc celebration show the capricious instincts and sense of adventure on Spirit’s self-titled debut and The Family That Plays Together, both 1968, the following year’s Clear and 1970’s The Twelve Dreams Of Dr Sardonicus are well worth exploring.

There’s a luscious quality to the first three albums that comes in part from the deployment of orchestral arrangements thanks to producer Lou Adler’s use of veteran jazzer Marty Paich’s thoughtful writing. Such ornamentation, veering into baroque opulence or, as with the ethereal Taurus, a bucolic splendour pulls things slightly outside standard rock band schtick.

While guitarist Randy California might have picked up licks from Hendrix, there’s something more in play than obvious blues or full-on, freak-out heaviness. Elijah’s taut bookending theme, composed by keyboardist John Locke, gives way to a groovy modal improv shining with California’s fluid, sustained tones and drummer, Ed Cassidy’s generous use of space and dynamics. That capacity to smoothly shift moods typifies Spirit’s openness and ear for adventure as they evolve.

The arrival of Neil Young producer David Briggs for the brilliant but sparser-sounding The Twelve Dreams Of Dr Sardonicus coincides with a rise in friction between members. After its completion California departed for an ill-starred solo career that surprisingly included a surging cameo on Peter Hammill’s gothic masterpiece, The Silent Corner And The Empty Stage. 1972’s Feedback is not without notable moments and useful picking from Randy-replacement, Chris Staehely. However, mundane lyrical matter and the diminishing returns of a blues-rock holding pattern lacks the previous innovative momentum as Locke and Cassidy attempt to keep the show on the road. Esoteric’s expansive set boasts sparkling remasters, extra tracks and bonus of the band’s debut appearing in its mono mix for the first time on CD. Deserving more than simply being remembered for a failed plagiarism court case against Led Zeppelin, these collections provide welcome recognition of Spirit’s ambitious achievements.