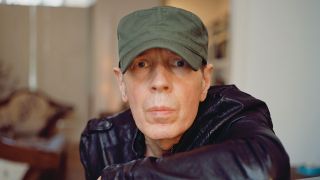 As befits the passing of an artist as influential as Scott Walker, the plaudits from the music world came thick and fast following the news that he had passed away on March 22, 2019.

“He took music to a place it actually hasn’t been since,” said longtime admirer Brian Eno.

“Musically and lyrically, he ultimately charted a path that was entirely his own, beyond imitation; a singular path created by a visionary artist,” commented the equally reclusive former Japan singer David Sylvian. “His influence, should others wish to follow, might encourage the path of no compromise, allowing oneself to
mature as an artist, and trusting the resulting work will find an appreciative audience.”

Sunn O)))’s Stephen O’Malley, who had – amazingly, according to some press – coaxed Walker into the studio to work on the celebrated Soused album in 2014, tweeted: “Rest in peace great maestro. It was an honor to meet you and spend a small time and space sharing your creative universe. An unbelievably rich and affirming experience, your courage and passion for the depth of the creative source.”

“So very sad to hear that Scott Walker has passed away,” added Radiohead’s Thom Yorke. “He was a huge influence on Radiohead and myself, showing me how I could use my voice and words. Met him once at Meltdown, such a kind gentle outsider. He will be very missed.”

Walker’s influence over these artists, and others such as David Bowie, Opeth’s Mikael Åkerfeldt (who stated that the band’s Watershed album was hugely influenced by Walker’s 2006 album The Drift), Alison Goldfrapp, Marc Almond and more has long been writ in stone. By the time of his passing, the stylistic shift his career endured, from the rich and lush 60s pop of The Walker Brothers to the avant-garde experimentalism one hears over later albums such as 1995’s Tilt and the aforementioned The Drift, was something that not only set him out as such a fascinatingly unique and individual musician, but one who was hailed for being daring. But that hadn’t always been the case…

Born Noel Scott Engel on January 9, 1943 in Hamilton, Ohio, Walker first came to prominence as a member of The Walker Brothers, a trio who also included guitarist and singer John Maus and drummer Gary Leeds. Although they’d made some headway at home in the States, it was at the suggestion of Leeds, who had toured the UK with PJ Proby, that they try their hand in the burgeoning British pop scene of the 60s. The trio, who by now, at the suggestion of Maus, had all changed their surnames to Walker (Maus himself had used a fake ID bearing the stage name John Walker in LA), travelled to the UK, paid for by Leeds’ stepfather. The investment was to pay rich dividends.

Although originally The Walker Brothers shone brightly, they’d burnt themselves out within a mere four years. During that time they’d hit big with songs that have come to epitomise the late 60s. Make It Easy On Yourself, My Ship Is Coming In and The Sun Ain’t Gonna Shine (Anymore) are all easily recognisable as some of the greatest songs of the era, readily identifiable to anyone over the age of 50. However, by 1968, when The Walker Brothers split, the pressures of the fame game were already eating away at Scott Walker, slowly moulding the attitude that would, eventually, lead him to the sounds that made him such a figurehead for the experimental and avant-garde within progressive music.

Already a fan of both progressive jazz and the beat poets, as well as European cinema, Walker happily admitted to being “a continental suit-wearing natural enemy of the Californian surfer”. When he released his first solo album, Scott, in 1967, a mere six months after The Walker Brothers’ own Images, it was noticeable for including a mix of his own compositions, covers and three songs by the Belgian singer songwriter Jacques Brel, of whom he was an unashamed fan, namely opening track Mathilde, Amsterdam and My Death, all delivered in his rich baritone. By the time he released his fourth solo album, Walker’s dichotomy was there for all to see.

1969’s Scott: Scott Walker Sings Songs From His T.V. Series was a collection of material he performed on his BBC television series Scott, still pushing the idea of him as some crooning, middle-of-the-road star of light entertainment, with takes on Burt Bacharach’s The Look Of Love and The Impossible Dream from Broadway musical Man Of La Mancha. The same year Scott 4 was also released, under his real name. It was his first album full of his own work and, at the time, Walker’s worst-selling record. And yet today it is hailed as one of his strongest, and certainly, with songs like opener The Seventh Seal, inspired by the Ingmar Bergman film of the same name, and The Old Man’s Back Again (Dedicated To The Neo-Stalinist Regime), it was a precursor to the musical route he would take throughout the 90s and beyond.

“The record company called me in,” he said of the period, “and carpeted me and said, ‘You’ve got to make a commercial record for us…’ I was acting in bad faith for many years during that time… I was trying to hang on. I should have stopped. I should have said, ‘Okay, forget it,’ and walked away. But I thought if I keep hanging on and making these bloody awful records… this is going to turn round if I just hang in long enough, and it didn’t. It went from bad to worse.”

The five albums Walker released between 1970 and 1974 – ’Til The Band Comes In, The Moviegoer, Any Day Now, Stretch and We Had It All – do little for his reputation. None charted, and all were mired in middle-of-the-road covers on which even Walker’s own velvet vocal could not mask the evident creative disappointment.

It would be an unlikely Walker Brothers reunion in 1975 that would kickstart his own regeneration as the artist who made such pioneering albums in the 90s and beyond. The trio found themselves back in the UK Top 10 with the title track of their reunion album, No Regrets, a cover of the Tom Rush song. Although one of the best Walker Brothers songs, it, and the follow-up album, 1976’s Lines, still kept the trio rooted in MOR territory. However, 1978’s Nite Flites was a totally different story. Featuring all original compositions from the three (four from Scott, four from John and two from Gary), finally The Walker Brothers seemed to have cut free from commercial restraints, with Scott’s dark and foreboding The Electrician echoing artistic moves he’d made on Scott 4 and pointing the way ahead. Sadly, sales of Nite Flites were poor, and the resultant tour relied more on the band’s old balladeering sound. Inevitably, The Walker Brothers lost heart, drifting apart at the end of 1978.

In 1981, Julian Cope curated Fire Escape In The Sky: The Godlike Genius Of Scott Walker, a compilation of Walker’s own material from his 1967-70 solo releases. Two years later, Walker himself reappeared with Climate Of Hunter, his first solo release in a decade. Despite appearances from Mark Knopfler and Billy Ocean, and being the closest of Walker’s later releases to standard rock music, the album was still moving away from the mainstream, less reliant on melody and using Walker’s voice more as an instrument at times. Critically lauded, there were even plans to tour the album, while Walker was rumoured to be working with Brian Eno and Daniel Lanois on a follow-up, when his label, Virgin, dropped him due to poor sales.

Walker wouldn’t release another record until 1995’s Tilt, an album that pushed the sound of Climate… even further into the abstract, eschewing harmony for a bleak, minimalistic sound. The album formed the first part of a trilogy, alongside 2006’s The Drift and 2012’s Bish Bosch, which one could realistically claim as Walker’s final three solo studio albums. In the interim he also released the contemporary dance piece And Who Shall Go To The Ball? And What Shall Go To The Ball? in 2007 (of which only 2,500 copies were issued) and scored soundtracks for Brady Corbet’s films, 2016’s The Childhood Of A Leader and 2018 release Vox Lux.

All of Walker’s later releases were critical hits and brought with them some commercial success, too; Tilt reached No. 27 in the UK Albums Chart, and both The Drift and Bish Bosch charted – no mean feat for albums that deliberately eschewed the recognisable song structure and melody that had originally bought Walker the fame he became so uncomfortable with. All of these records fit into the progressive music world with ease and we suggest that any Prog reader not familiar with them should investigate. The supposed awkwardness of Walker’s later music needs to be considered only against the immense popularity of his 60s material. Quite frankly, if you can handle Gates Of Delirium, Tarkus, Tago Mago or Tangram, the likes of Farmer In The City (Remembering Pasolini), Clara or SDSS1416+13B (Zercon, A Flagpole Sitter) shouldn’t pose you much problem.

Ironically, it would be 2014’s Soused, Walker’s collaboration with drone merchants Sunn O))), which gave both their biggest ‘hit’ in years, reaching No. 30 in the UK album charts. Although a challenging listen, it also featured some of the most accessible material both artists had created in years. When Walker’s sonorous voice booms out at the start of opening track Brando, you’re struck by just how much like the Scott Walker of the 60s he could still sound.

A seemingly solitary and reclusive character, the 2006 documentary Scott Walker: 30 Century Man gave the public some insight into the man, not least its famous scene of Walker overseeing a joint of meat being repeatedly punched for a percussive noise during the making of Tilt. And yet those who knew him paint a differing picture.

“He’d surprise me, turning up in a crowded backstage environment, seemingly at ease, commenting playfully on the performance,” David Sylvian told The Guardian. “He was vulnerable in many respects, but not a pushover. He liked a joke, but wasn’t into small talk. Guarded but intellectually and artistically rigorous, and entirely authentic.”

In February the music world paid tribute to former Talk Talk singer Mark Hollis, who sadly died from cancer aged just 64. There are parallels to be drawn between the two. Both started out caught up in a pop fervour from which they slowly withdrew, their art becoming all the more intense and fascinating. Their final artistic statements were both challenging, intoxicating and a far cry from where they’d started out.

Once Scott Walker finally broke away from the hold of commercial success, he became one of the important composers of the late 20th and early 21st century. One hopes there was an artistic satisfaction that went with him to his grave. There certainly deserved to be.