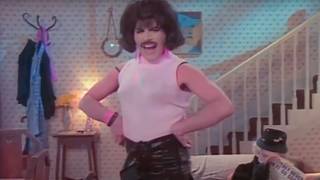 Queen’s Bohemian Rhapsody is often cited as the first-ever music video, but it wasn’t – Tony Bennett lays claim to that for his promo for his 1956 song Stranger in Paradise. And while the Bohemian Rhapsody video is truly iconic, it’s mostly just a studio performance with a few Doctor Who visual effects thrown over the top.

Queen’s first narrative concept video is an interesting homage to George Lucas’ 1971 screen debut THX 1138, but has ambitions that its budget can’t achieve. Brian and Roger don’t care for the result, although the single barely dented the US Top 60 and wasn’t even released in Britain, so nobody saw it. Still, it’s a bold stab – and fun, with Freddie throwing interpretative shapes while being beaten by robot policemen and the band looking awkward with clipboards.

A braggartly metallic anthem for time-hopping fantasy blockbuster Highlander, Princes Of The Universe isn’t content to simply intercut a band performance with clips from the movie (although it is mostly that). The film’s star Christopher Lambert – playing immortal warrior-turned-antiques dealer Connor MacLeod – returned to take the stage with Queen on a Hollywood scale. Facing off against Freddie, there’s a clash of swords that’s totally upstaged by Brian soloing on a collapsing castle.

So Zeppelin, Maiden and the Stones had private jets. How many bands are cool enough to get their own train? For two hot summer days in 1989 Queen’s Miracle Express took over the Nene Valley Railway in rural Cambridgeshire; Taylor’s girlfriend, ‘Flake girl’ Debbie Leng, joined them to rock out at 30mph on the sleek open-air steam engine (GWR 2884 Class, since you ask). The manic strobing over the bass solo was surely an influence on Metallica’s Enter Sandman’s vid.

When a Queen computer game bursts into life, the futuristically-attired bandmates materialise in a suburban family home and give a close-up performance to a startled kid. Although this sounds like a classic 80s childhood wish fulfilment fantasy, The Invisible Man is a home invasion-based shoot-‘em-up where the aim is to zap the band before they reappear again. It ascends to kitsch nirvana during the ace solo, when a squadron of Brian Mays shoot multicoloured laser beams out of their Red Specials, in a child’s bedroom.

May, Taylor and Deacon gamely portray a trio of down-and-out winos sleeping rough in a derelict theatre, transformed into rock stars by the mysterious magic of Freddie Mercury. The natty frontman also summons into being the cartoon bandmates from the album’s sleeve, plus some classy blue-skinned backing singers. It’s another compelling blend of live action and animation, and a gaudy riot of colour and artifice as only 1986 can provide.

A Top 20 power ballad of rare delicacy, Save Me also had a quietly pioneering promo clip. An early use of rotoscoping in a music video - the technique of fusing live action and animation that A-ha later made their own - it still has a dreamy, affecting charm. It’s Brian’s song, and he was closely involved in storyboarding the haunting narrative of a lonely woman at a Queen show, who falls off a bridge and turns into a glowing golden dove (spoilers).

A hugely involving immersion in the dystopian world of Metropolis, Fritz Lang’s hallucinogenic 1927 vision of an eerie mechanised future, with the band gliding through the film’s monochrome expressionist cityscape in their most expensive video. The massed workers’ outstretched hand-clap is one of the most powerful and defining images of the era, in part due to its breathtaking adoption by 72,000 fans at Wembley Stadium during Queen’s show-stealing Live Aid set.

With Freddie too ill to film, old video footage of the band was brilliantly morphed into stylised animation based on different artists – Deacon a winking Picasso, Taylor’s drumming a Jackson Pollock explosion. The footage was placed within a dizzying visual feast of dark baroque artistry, piling scary dolls, plasticine jesters and goose-stepping Nazis into a sumptuous miniature stop-motion tableau that won two industry awards. The result is timeless; it’s still as breathtaking today as it was 25 years ago.

Fancying Roger Taylor is something every schoolboy has done for at least a second, thanks to the drummer’s eye-opening appearance as a schoolgirl in this fondly-remembered Coronation Street parody. Freddie shaved off his luxurious 80s moustache to film the ballet sequence (a scene from Nijinsky’s Afternoon Of A Faun). Brilliantly, he kept the iconic ‘tache on to play a frustrated leather-miniskirted housewife; surely the greatest comic turn in rock video history. America didn’t get it at all.

There’s a delicious contrast between the melancholic self-pity of the song’s title and lyrics and the sumptuous decadence of the video. John, Bri and Rog pout with jaded disaffection at an array of flamboyant distractions on a magnificent set, conceived by Freddie as a reconstruction of the 1892 Italian opera Pagliacci. In his glorious element, Freddie’s performance is a tour de force, utterly selling the emotional conviction even in a bright red feathery spandex catsuit of eyes. The band appear unmoved, perhaps because Brian’s skull guitar was disappointingly small.