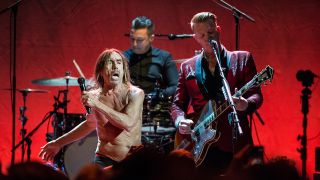 “Well isn’t this a swanky place,” Iggy Pop says as he pads into a suite at a luxury hotel in one of Detroit’s suburbs. It’s a long way from the trailer he and his parents occupied during his youth as James Osterberg in Ypsilanti, Michigan.

Dressed all in black, he shows little wear and tear from his busy week back home. Pop started with a public Q&A session for the Grammy Foundation’s Living Histories Live series a couple of nights earlier, playing a short acoustic set, along with producer Don Was and Dean Fertita from Queens Of The Stone Age, The Raconteurs and Pop’s Post Pop Depression touring band. But now he’s in the midst of the real work that includes promoting a wealth of new material.

This Year Of Pop included two projects about the life of Pop: Gimme Danger, Jim Jarmusch’s lively and lovely documentary about the Stooges that the director prefers to call “a love letter to my favourite band”; and Total Chaos: The Story Of The Stooges/As Told by Iggy Pop, published by Jack White’s Third Man Books.

Pop’s year also included the release of two albums – Post Pop Depression, a collaboration with QOTSA leader Josh Homme, and Post Pop Depression Live At The Royal Albert Hall, capturing his May 13 performance in London – and Iggy Pop Life Class, an exhibition of nude drawings, currently on display at the Brooklyn Museum and in also book form. Few 69-year-olds can boast this much production in a calendar year, let alone one who has defied death a few times in both life and performance. But Pop gives little more than a shrug of the shoulders while we marvel at these late-in-life achievements over coffee.

There’s some karma going on, or some planetary movement or something. A bunch of stuff just all kind of capped at once, and it all had to do with different things I’ve been doing all my life, different people I’ve known for a long time, and all of a sudden there it was. It was seven or eight years ago I asked Jim to make a film [about the Stooges], and it was 2014 when I texted Josh about doing what became PPD, and ten years ago Jeremy Deller was trying to get me to do this Life Class that I’ve done. And then I have my own things I’m doing with my own group as well.

Post Pop Depression was a real career high point. What kind of perspective do you have on it in hindsight?

Well, the culture behind it couldn’t be more different. I’m East Coast, they’re West Coast. I weigh probably half of my co-writer [laughs]. Josh’s like two of me, and he’s not overweight. Yet mentally we’re really on about the same pitch level and wavelength. He likes going arty but he’s a rock boy. You scratch the surface and that’s a tough little rock boy – tough big rock boy.

And the challenge was very simply to recognise the drummer [Arctic Monkeys’ Matt Helders] is a more highly skilled musician than me, or than I’ve ever been, and I’ve got to keep up. He can also sing better than I can, and I better keep up. The multi-instrumentalist [Dean Fertita] is a better instrumentalist then me, and I gotta keep up. And then the chief honcho, he can play every instrument and sing alone as a package better than anyone in rock today. He’s really bloody good.

That makes me kind of the appendix if I don’t watch it [laughs]. So I tried hard to recognise that and up my game a little bit – sing a little better, be really quick with the lyrics so things wouldn’t develop on a daily basis too much without me. And it kinda worked out, I think.

The Post Pop Depression tour seemed to be a universal success, and you documented the Royal Albert Hall show for posterity. What was taking this concept on the road like?

The live thing was really interesting because we did a lot of rehearsal. Right off the first rehearsal it sounded really good. But there were all the questions. Like, I had made a song list that included my whole career, and Josh didn’t want to do that. Finally I had to say: “Okay, do what you want, but we better play Repo Man – and he liked Repo Man. He could relate because he’s from the desert and that [song] also came out when he was a certain age.

With all due respect to the other bands you’ve played with, especially the Stooges, this may have been the best band you’ve had in terms of sheer musicianship.

Oh yeah. It was really a musical mind-blow. I realised just how good it was when you had people who could play and sing and really know how to bring the detail of those song to life. And then as we got out on the road, it took about five gigs…

The first thing we did right off was the [Late Show With Stephen] Colbert show. I’m standing there singing my songs, and what you don’t see on the show is at the end of it people were starting to groove, so I forgot it was a TV show. And I’m used to just telling the band what to play: “Okay, The Passenger!” “Okay, Search And Destroy!” And they’re like: “Well, we don’t have the right things, and you can’t to that. There’s another guest that supposed to be taped now.”

But by about the fifth show, all of a sudden the whole band, it’s like boiling water; it’s little bubbles, everyone’s moving around. And by the end of the tour, I mean Josh is doing the duck-walk and Troy [Van Leeuwen] is doing the James Brown and everybody’s humpin’ and bumpin’ and the whole thing just took off and everybody just had a real ball. They really did.

I just tried to keep up! Homme staged the whole thing, too. He said: “I’ve got this idea – we’ll have an Iggy Alley.” And I’m used to having the band way behind and I have the whole floor, all the sideways, all the wings. But here I’m sharing space with these formidable personalities who are very good and very successful, and so I had to work vertically.

And then he was like: “Well, we’re gonna have suits and we’re gonna meet this guy…” Now, I’m not the kind of guy who’s gonna fly coast to coast to meet a fashion designer. And I did. He did a great job with the suits, designed specifically for us. So it was properly lit, properly played, properly sung. I managed to do most of the show on key.

It was a busy itinerary, too.

Yeah, it was a way tougher schedule than I’ve worked for many years. I thought I was gonna die.

Is there a bit of an irony that you did a tour this year where you dressed to the nines, and now you’re being exhibited wearing nothing at all?

[Laughs] Well, I was dressed to the nines for the first two songs. It was about the same – just a nicer pair of pants.

So would you like to do it with these guys again?

I’d like to do something else with Josh, but not another one just like this. No, no, no. Those guys are gonna go on now and do some great music for everybody, and they don’t need to be fucking around with Iggy Pop any more.

In that regard, earlier this year you spoke about Post Pop Depression being something of a final hurrah. Might that indeed be the case?

Well, I’ve been working all year and most of it away from home. It’s great but it takes energy, that’s all. So I don’t want to have any plans to leave home for a while, and I don’t want to deal with the public for a while. I’m not motivated to hang out a shingle real quick – that’s why I mentioned that. I think I’ve put out five records since I was sixty, and I’ll be seventy in the fall. The general wisdom is that when you get to a point and you’ve done well enough, you wait five years. And I’m like, wait a minute, that means I’ll be seventy-five by the time of my next album. There may not be albums by that time. So that’s what I was thinking about.

Are there any bucket-list items left at this juncture?

I’m like anybody else – if something comes along… Like, I was talking to Don Was and he’s working with a musician I really love and admire who lives in Florida called Dr Lonnie Smith. I fuckin’ love Lonnie Smith. I went to his gig at this senior centre in Delray Beach, and he’s so good. So Don said: “Hey, let’s make a record with Lonnie Smith,” and I can’t say no. So I said: “Okay, if I don’t have to leave home.” So yeah, something like that. But not something that’s going to put me in a room at the Apple store with a twenty‑person camera crew and a fitted suit. I did that this year.

Two of these projects – the Gimme Danger film and the Total Chaos book – are Stooges-related. Is this the cap on that band’s history?

I think so. I wanted to finish up doing the job for the Stooges. And after Ron [Asheton] passed away, that involved – sadly, but also poetically, karmically correct – resurrecting the second, Mark Two of the group with James [Williamson]. And then Scott [Asheton] became ill about halfway through that, and I knew where that was heading. The reason for that to go on lessened after Scott couldn’t make it to the gigs. There was no reason to go on once Scott passed away. So that was done, and I knew the film was probably going to get made, so I thought the last thing I can do for the group is put that out there, and then the book happened.

With all the present and past things you’ve been through this year, what’s your sense of your legacy at this point?

I’ve never been very good at that. I read about it. Somebody else says something, and I think: “Well…” Myself, I think there’s some stuff I’ve done that was pretty good but so different. For a variety of reasons, maybe timing, it didn’t relate as fully as maybe I think it will in the future. Now I think, little by little some of that stuff is gonna be there for people to find. I think my musical skills have finally become solid, but they’re basic, very, very basic. I’ve written one good pop song, Candy. It’s a very decent, proper pop song, but that’s as far as that went. And I can do a certain kind of vocal very basically. But I’m bringing other things that aren’t really music. Sometimes that pisses off musicians. So it’s kind of like that, I guess. But I don’t really know.