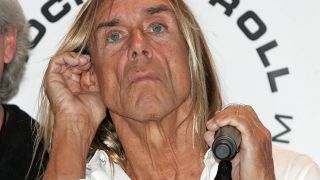 A book detailing the history of the Stooges is to be released later this year.

Titled Total Chaos: The Story Of Iggy And The Stooges, it was edited by Jeff Gold who compiled the book after conducting several interviews with Pop.

The book is described as “the first book telling Iggy Pop’s story of the Stooges from his own words. Grammy winning editor and avid music historian Jeff Gold spent two days at the rock legend’s home sharing pictures and memorabilia from his collection.”

The hardback will be published on October 11 via Third Man Books and also features “a trove of unseen photos.” Best-selling author Jon Savage and Johan Kugelburg also contributed to the final edit.

Total Chaos: The Story Of Iggy And The Stooges is available for pre-order.

Pop is currently on tour in support of his latest album Post Pop Depression with Josh Homme.