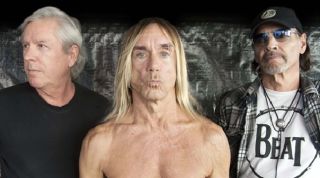 Iggy Pop has admitted he’s unsure whether The Stooges have a future following the death of drummer Scott Asheton at the weekend.

The frontman is uncomfortable with the idea of continuing without Asheton and his guitarist brother Ron, who died in 2009.

Iggy tells Rolling Stone: “I don’t want to say I’m done with the band, I would just say that I feel like the group has always included the Asheton brothers. When Ron passed away Scott represented him. Nearly everything we play, Ron played on originally. I just can’t see the band playing in the near future. It would just be wrong.”

But he adds: “If something comes up you should be open to it. It depends on the feeling of the family and the surviving members.”

In fact the 66-year old isn’t sure whether he’ll take the stage with any band in the foreseeable future. He reflects: “I don’t feel right now like there’s any reason for me to go jumping out in tight Levi’s.

“I definitely have no plans to be a touring musician for the next couple of years. I’ll probably tour again at some point, but I don’t know where and I don’t know how.”

Iggy recently thanked the BBC for rekindling his love for music by inviting him to present a radio show.