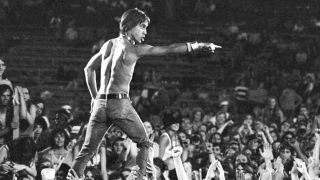 When did The Stooges metamorphose from a straight rock’n’roll band into the full blood’n’guts Iggy show it ended up as?

Before we were a straight rock’n’roll band we were a very experimental band. Then, little by little, it started coming in from left field to be more of a rock show. At the same time as we were doing more shows, we were getting more resistance in general on all sorts of levels. And I counter-attacked. That’s when the blood and guts started coming into it. Some gigs would have no blood or guts, others might have a little scratch, once in awhile there was a gig where I’d just get a little bump on the head. But bump on the head doesn’t sound as exciting as blood and guts.

Was there ever a moment during the Stooges madness when you stood back and thought, enough is enough?

Early on, in Romeo, Michigan we played next to the State Police post. I wasn’t getting the rise I thought I should out of the audience, so at the end of the show I tossed a heavy mic stand at them and then went off stage and stripped off and went out and stage-dived into the midst of them and just rolled naked throughout the auditorium. They went crazy, but I ended up in pokey for the night. But it’s showbiz, after all.

What’s the very worst injury you’ve ever inflicted on yourself?

I dislocated my arm. That was dramatic. The arm was sticking out like a tree. It pops out every now and again.

Did you really drip candle wax on yourself and roll on broken glass on stage?

Yes, but not at the same show.

Have you ever taken a shit on stage?

It was in the wings. So you could say that I’ve broken the unwritten law.