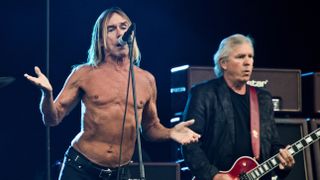 Stooges guitarist James Williamson says it would be “ludicrous” to tour under the name Iggy And The Stooges.

Founding drummer Scott Asheton died in 2014 and original bassist Dave Alexander passed away in 1975. Although Williamson was not a founding member, he joined in 1970 and enjoyed the group’s early success before leaving in 1974 and rejoining in 2009 after the death of founder member Ron Asheton.

The band have toured with various lineups down the years, but Williamson doesn’t expect them to hit the road again.

He tells Joel Gausten: “The Stooges is over. Basically, everybody’s dead except for Iggy and I, so it would be sort of ludicrous to try to tour as Iggy And The Stooges with only one Stooge in the band, and then you have side guys.

“That doesn’t make any sense to me. And frankly, I don’t want to tour anymore. I’m kind of done with it. I also feel like we’re getting a little long in the tooth to be doing these show anymore.”

Williamson adds: “I know Iggy does them, and people seem to like them. That’s fine, but I feel like I don’t want to beat it into the ground. In 2013, we were still kind of kicking butt on stage, and I think we could hold up to most bands – young bands, in fact.

“But these days, I think it’s more of a memory than it is a reality. I’m good with not doing nothing. By the same token, I still feel I have some music left in me, so I’m enjoying doing these little projects and putting them out there for people.”