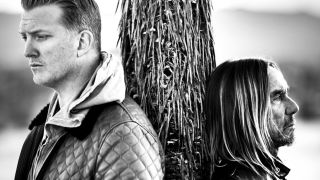 Iggy Pop has announced he will be touring with Josh Homme in support of his latest album Post Pop Depression.

Iggy and Homme recently performed Gardenia on The Late Show With Stephen Colbert. The song is available as an instant download with pre-orders of the album. They also made Break Into Your Heart available to stream.

Due on March 18 via Loma Vista, the pair recorded the album under the cover of secrecy at Homme’s remote Joshua Tree and Pink Duck studios.

Iggy says: “I wanted to be free. To be free, I needed to forget. To forget, I needed music. Josh had that in him, so I set out to provoke an encounter – first with a carefully worded text, followed by a deluge of writings all about me. No composer wants to write about nothing. He got revved up and we had a great big rumble in the desert USA.”

Homme adds: “This was to go where neither of us had gone before. That was the agreement. And to go all the way.”

The album can be pre-ordered via Firebrand Stores.

Post Pop Depression Tour tickets will go on sale in the UK and Europe on January 29 and in the US on January 30.