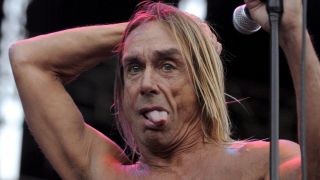 While many of his peers have softened into men-next-door, 66-year-old Iggy Pop is still a 100 per cent pure rock star: the feral hair; the simian face; the insolent eyes; the unfeasible body-fat ratio; the mythologised schlong. And, of course, that free-roaming brain, which ensures our interview flits from music matters to such things as America's breast fixation, and fuels the anarchic spirit of The Stooges’ second comeback album, Ready To Die.

When Stooges guitarist Ron Asheton died in 2009. after the re-formed group had toured playing their early material, did you ever consider quitting and going back to being solo?

Well, I could have quit with the band, but it sorta felt as if the work wasn’t quite complete, because we hadn’t done the Raw Power material [which they later did with guitarist James Williamson]. Also, these things just take on a big momentum of their own. It’s like war or sex or something, y’know? You’re in the middle of it, and it just doesn’t want to stop sometimes. So that also gets dangerous. I am planning to take a year off from it next year. ‘Cos it wants to eat me.

James Williamson is replacing Ron again. Does that make for a different chemistry?

A little bit different. [But] it was the same with Ron, too. Basically, for the first seven years of the group I was an unstoppable monster. And I would just relentlessly torture the rest of them until they let me sit down and fuck with their music. I was a lot more than a vocalist… And both Ron and James, when they had a second time around, that wasn’t exactly what their egos wanted. It’s a little looser with Ron, but with James it’s very strict. He’ll give me a piece of music: “It goes six times this, four times this… sing to it, asshole.”

You mean they’ve got you in line now?

Exactly. And you know my claim to fame is that I’m the one that can get the group a fucking job. [Laughs] I’m the pimp for The Stooges.

Are The Stooges like an assembly of mean old men?

Yes, there is some of that ‘mean old family’ and ‘mean old men’ and everybody hates each other. And I really try hard not to think about all the old shit. When I actually see one of the other guys, most of the time, we get along.

At the South By Southwest festival you were threatening the audience that you’d take your penis out.

I wasn’t threatening them to take my penis out. I mean, I never really have displayed my penis. That’s sort of… that’s an urban myth. Once in a while it slips out here and there, or my pants fall down a lot.

Rumour has it you’ve stopped stage-diving too?

Well, I did it last year. And I got hurt again. So this year I’m more like stage-falling, y’know?

Songs like Burn, Sex and Money, Job and Gun are social commentaries on modern America, right?

Well, I have a pretty sarcastic feeling about that place. And I’m living in it. That’s where I live when I’m not out, y’know, messing up somebody’s movie or showing my penis on a stage in America. I hear all the shit on the TV and all the chitter-chatter, it just makes me crazy sometimes. So I wanted to sing about that stuff and put less of my own stuff into it. Because at this point in my life I’m kind of like a target, y’know? When I was 2. I would just get up in the morning even if I wasn’t in a group. And my whole attitude was: “Look, see me, hey, it’s me!” But now it’s like: “Oh shit, they recognised me.”

On DD’s you’re declaring your passion for big breasts.

Well, yeah. Tits are very big in America, y’know? I mean, we have lots of big tits. And if people don’t have big tits, they have the operation to get them. I always liked Russ Meyer, wonderful movies. I used to go when I was making Raw Power if I wanted to relax. They’re beautiful. The attitude’s great and the tits are fucking amazing.

How do you deal with the fact that everyone and their dog calls you the Godfather of Punk?

[Industry suits] have to think in boxes. They have to have a place to put me to reference the whole thing. And they think they have to explain that to an audience of people who are similarly lacking in intelligence or education. So you get that. It’s okay. But it’s tedious.

We hadn’t sold out one of the shows, so the promoter wanted me to go on the radio. So I said: “Alright, I’ll do an interview.” Well, then that wasn’t enough. They wanted me to talk about five punk songs. And I told them: “I don’t like punk.”

Apart from music, there’s a French movie coming up, L’Étoile Du Jour, that you’re in.

It’s in French, but I have no lines. I play a kind of a ghost. I play, like, the guy’s conscience or his guardian angel. It’s all very artsy. It’s basically about a young guy and an old guy who at the same time decide to leave their wives and max out their credit card and live like rock stars like Iggy Pop and do the things they would imagine I’d do. None of which I do, but, you know: drugs, fancy wine, bikini girls by the pool…

Most people in the UK associate you with car insurance these days. Do you mind?

Well, this is it, yeah. And America, they don’t fucking know me at all. So, yeah, I know. Well, that’s the way people are. And look: people have their lives and they’re busy, so why should they know about me? But luckily there are still lots of people who aren’t busy. Maybe they’re lazy, maybe they’re on drugs, maybe they’re perverts, maybe they’re misfits. Those are my people. Those are the people that are really going to have time to say: “I think I’ll listen to Iggy Pop.” But the guy that has a good executive position, getting in his Mercedes to go torture his secretary, I don’t think he’s going to listen to Iggy Pop, y’know?