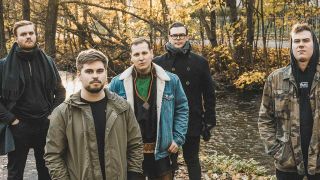 Ondt Blod are releasing their second album Natur on March 9, and are streaming it now exclusively with Metal Hammer.

“Where as our debut album Finnmark was clearly based in the punk and hardcore genre, we have allowed ourselves to be more genre bending on Natur,” vocalist Aslak Heika Hætta Bjørn tells Metal Hammer. “We are all very proud of our debut, but did not set out to make Finnmark 2, The Return Of Finnmark, or Finnmark: Origins. We wanted to see how far we could go in any musical directions, while still keeping within the frame that is Ondt Blod.”

Throughout Natur’s ten tracks, Ondt Blod tackle topics of friendship, growing up, change and the treatment of the Sami people in Norway.

“The lyrics on our debut were mostly about going through my teen years in a town in industrial decline, spending most of our lives living for the weekend, but obviously we could not write the same small town epic over again.”

“The record starts with a Sami call to arms. A new generation of young, angry Sami are sick of being politically ignored, yet sold as postcards when high lords want to sell Norwegian culture. Speeches are on high rotation, but government-enforced slaughter of reindeer herds and land grabbing is met with silence. Knives are sharpened, and a hundred reindeer skulls are piled up outside courts and parliament. Musically the track is a classic Ondt Blod hardcore banger: d-beat, guitars on speed, and a huge chorus. The joik starting the riot is by Ella Marie Hætta Isaksen of ISÀK.”

“Catchy punk rock with hints of convertibles and longing – it sounds as if Hot Water Music had written Boys Of Summer. The song is about the tension of resorting to revenge and violence after a friend of mine was raped, but on the other hand, the realisation that the only thing you can do to help out your friends when they are going to the most serious shit is to be present and supportive.”

“Grandiose bragging and a middle finger to the tastemakers and their followers. Humbly stating that I’m the ‘dárrolaš Áilohaš/ the Norwegian Áilohaš,’ the greatest in Sápmi, and ‘young and hungry till I die.’ Heavy riffage and a hedonistic chorus filled with power and joy. A double gasoline-and-tonic coming up.”

“Unge Kniva is about being young, angry, and crashing the Spellemann-party – the Norwegian Grammys party. Where the privileged let us in, we take what we want. Where they don’t, we build our own castles. Our time is now.”

“Heavy riffing in the verses, oozing with testosterone and bicep-rock, and a chorus with a refreshing taste of rosé wine and Peter Gessle. One of two love songs on the record; both songs defined by the same lack of optimism.”

“An escape from stability and responsibility, delivered with precision and groove. About longing for everything that could have been different, giving up balancing on the edge of the blade, and a celebration of those who catch you when you finally fall.”

“Store Ord (Røyk Og Speil) is about moving from my home town, and how distance and time makes friendships fade. The song is about the plans of world domination that never were realised, and the unsaid words told between the lines when old friends outgrow their friendship. It is a song about leaving a small town, about those who left, and the one left behind alone.”

”Storma is a bittersweet disco-punk flirt about going down with the ship in a quickly sinking relationship. Storma was released as the first single of Natur, and is very different from what we’ve done before. Groove and melody melts together with a cocaine-fuelled saxophone – played by Lauritz Lyster Skeidsvoll – as a hot date between Baroness and Miami Vice.”

“Giftige Tunga is about when a friendship and shared ambition is eaten by self-promotion and jealousy. It’s a huge metal tune with a jazzy bridge, where intricate guitars battle to a tasty bass solo.”

“The suicide rate among young Sami men is enormous compared to the rates of the general population. Giron paints the picture of church bells and empty chairs, paired with a very real fear of who is to be the next one to die. The song features a joik – an ancient Sami singing tradition – duet with Aslak and Ella Marie Hætta Isaksen, Sami-pop star of the electro pop band ISÁK. Throw in some power slogans, and a crescendo at the end, and you’ve got an album closer.”