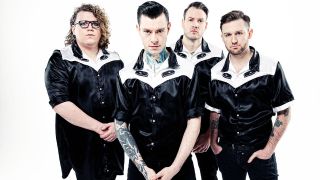 There’s a chance you might recognise one or two of the members of today’s new band of the week, comprising as they do personnel from some of the UK underground’s most prized bands of recent years – including Gallows, The Smoking Hearts and current TeamRock favourites Nervus among them. The band are essentially the logical conclusion of what you might expect from those bands aligning – furious punk rock songs about angst and heartbreak, tempered by gloriously hooky songwriting and a slather of poppy sheen.

We catch up with the band below, to find out more about them, the new album and what they’ve got lined up next.

Can you introduce yourselves – where are you from, who does what and what are your roles in the band

Calvin: “We hail from different parts of the UK, myself and Simon from Shefford, Bedfordshire, Lee from Bricket Wood and Em from St Albans; although we record and rehearse at Titan Studios in Watford, so we’re labelled as a Watford band. I’m ok with that.”

Simon: “Calvin and I have been making music together in various forms since we were at school.”

Calvin: “Funeral Shakes began with a handful of ideas that didn’t really fit with the sound of the band that both Simon and I were playing in at the time. We had just completed a tour and decided we should turn some of these new ideas into songs. We demoed them all at home, Simon playing the guitar parts, myself playing the bass and programming all the drums, and at the time we didn’t have anyone singing. For the purposes of the demos, I did it and ended up keeping the job.

We ran into Lee at a Metz show in St Albans. We had known each other awhile (Gallows took Smoking Hearts on tour in 2007) and we got chatting about music. We sent him over some of the early demos and that was that; Em joined us a few months later. The band that Em was playing in at the time were on tour, and there was a problem with their van/driver, so I was asked if I could drive them. Late one night we were showing each other new bands and I heard some of the early Nervus demos, I showed Em some of the demos Simon and I had been working on, and she came on board.”

Calvin: “We wanted to create something that was far removed from the musical projects we’d been involved with previously. Simon and I had both been involved with The Smoking Hearts, but the ideas that we were recording together didn’t fit with the sound of that band at all. We were influenced by surf guitars and 50s pop music, big vocal harmonies, and catchy choruses. We wanted to make songs that people could sing along to, that people felt an emotional connection with on some level, not just an album of riffs. Although I think we have that too…”

Simon: “We’re just doing us. We’re definitely not reinventing the wheel, but we’re also not trying to emulate anything/anyone else, or do what’s popular. We’re just making good rock music. Music that we like.”

What’s the story behind the new album – how did it come together?

Simon: “I began writing the songs for the album prior to actually forming the band. They were ideas I had without an outlet, so I would grab Calvin and we’d record them at home. As they developed, we realised we had something, so the idea of actually making a band became more real. After the band properly formed, Em and Lee would each bring their own unique thing to the songs, and soon enough we had an album.”

What’s your favorite story/anecdote from recording the album?

Calvin: “I could pick one of a thousand times that Steve Sears made me laugh just as I was about to track a part, and I’m pretty sure we could all say the same. Steve is a very funny and entertaining man, and recording with him is a lot of fun. He definitely understood what we were trying to get across.

Em recording an acoustic guitar part on the song Circles whilst balanced on a hover-board would ordinarily be out of the ordinary, but my favourite moment would be asking Lee to record his packet of Smints – he’s the only person I know who even eats Smints, so we got him to shake them at the end of one of our songs. I bet you can’t guess which one!”

What, in your opinion, is the stand-out track from the album and why?

Simon: “Sonically, You’re So Bad and Circles both stand out as, in terms of style, they’re both pretty far removed from everything else on the record.”

Calvin: “I always love it when people tell me that they’ve had one of our songs stuck in their head all day. I like the idea that something we’ve created has infiltrated all other thoughts in someone’s brain and come out victorious. It’s also pretty annoying when that happens to me with other’s songs, so it’s satisfying that we’re getting our own back on all the times that it’s happened to me. I hope that people enjoy our record, find something that they connect with, sing our lyrics, hum our riffs, and then get the songs stuck in their head for the rest of the day.”

Calvin: “Even though we are relatively young in the lifespan of a band, there’s been a few really cool moments. I think we’d all agree that releasing our album, having people hear it finally has to be top of the pile. Opening the first vinyl, the first CD at our album launch, ready for people to take home and hear was cool, and seeing the album appear on iTunes and Spotify for the first time was amazing. It was like a weight had been lifted, knowing that the cat was finally out of the bag and people could hear the album entirely finally.

Personally, we played a show in Bedford with Gold Key (Steve Sears, our producer’s band) to raise money for Cancer Research UK. It was our biggest show to date and also in a venue that holds a lot of special memories (I worked there from the age of 18), and it was pretty busy, a lot of old and new faces, and it was a special feeling to present the new band for the first time.”

Calvin: “If people come and see us live, they can expect to hear most of the songs off the album, presented much louder, with a few incorrect notes, played at a slightly increased tempo, delivered with all the charisma of a band doing everything they can to make the 30 minutes they’re onstage the best 30 minutes of your day.”

Calvin: “We are excited to take the band on tour, play in places we’ve never been before. We have a lot of shows coming up, some headliners and support shows in February and early March, before our headline tour in April. Then at the end of April, we have 4 shows with Cancer Bats at The Underworld. We’re also doing our first festival in May at Teddy Rocks with Feeder and Ash.”

Funeral Shakes’ self-titled debut album is available now via Silent Cult Records. Catch them on tour at one of the dates below:

New Band Of The Week: Fjokra