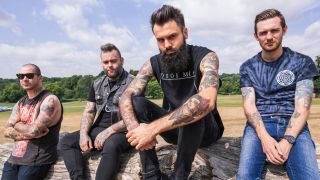 In the summer of 2013, as they toured their self-titled third album on the European festival circuit, the members of Gallows took a long, hard look at the world in which their band operates and concluded that, for the most part, it was a crock of shit. The punk rock scene had become infested with dilettantes and poseurs, had been transformed into a catwalk for self-obsessed pretty boys flexing just-so tattoos, bespoke T-shirt lines and ‘ironic’ pop covers. Where, they wondered, was the passion, the fury, the hate?

These conversations, ultimately, would serve as a launching pad for the new Gallows album, Desolation Sounds, the darkest, weightiest and most hard-hitting collection of songs ever to bear the Hertfordshire band’s name. The noted punk rock historian Jon Savage once observed that Gallows injected into British rock music ‘the feeling that there is something more at stake than money, fame and self, the belief that human beings are important’: that idea is only intensified on Desolation Sounds, a painfully honest, unflinching examination of the human condition and modern life’s messy detritus. And when Wade MacNeil seethes about “sham rock ‘n’ roll” on the album’s first single Chains, his tangible anger and frustration is born of the fact that for he and his bandmates, punk rock still matters.

“For better or worse, punk rock has ruined our lives, changed the way we look at the world and fundamentally altered our DNA,” says the Ontario-born singer. “Watching a lot of bands I get the feeling that punk or rock ‘n’ roll is a hobby to them, whereas for us, this music is always going to be in our lives, forever. It’s not something we do because we like it, it’s something that we have to do. When I see bands going through the motions, killing time until they can take over their dad’s business, to me it’s a fucking joke. We take this shit seriously.”

You won’t get MacNeil, or his bandmate, guitarist Laurent ‘Lags’ Barnard, to single out bands, or individuals, when they discuss the sickness at the heart of the punk rock nation in 2015. Some of these bands might be former labelmates, some are friends, and many are at least acquaintances, with whom they’ve have shared beers, spliffs and festival stages in the past. As they approach their tenth anniversary, Gallows know there’s nothing to be gained long-term in stirring up shit for the benefit of a clutch of clickbait headlines, and they’re too secure in their own skin to play childish games. When Wade MacNeil notes “It’s not easy to be a band… and it’s even less easy to be in a band that lives in three different countries”, he does so with a laugh, but there’s a serious point behind his smile. With the singer employed full-time as a radio DJ in Toronto, Barnard also making music with Krokodil and his experimental pop band Moones and bassist Stuart Gili-Ross now living in Los Angeles where he oversees the careers of Mallory Knox and Moose Blood among others as part of the Raw Power Management team, in the most clinical terms there’s no compelling logic for Gallows to exist in 2015. Indeed when this point is made to Barnard, the guitarist will concede that it was “definitely touch and go” for this collective at one juncture. That Gallows are still here, sounding more full-blooded, visceral and committed than ever on Desolation Sounds, is a testament to the strength of their convictions.

“When we’re together, we really need to make that time count,” says Wade emphatically.

“One thing Gallows have always done is keep people on their toes,” Lags adds. “I think our first record [2006’s feral, ferocious Orchestra Of Wolves] was a real breath of fresh air for a British band, and I think every album we’ve done since is a reminder that Gallows are important to music. Regardless of how many fans you have, it’s important to make something that’s vital. So many bands get derailed by the desire to be liked, whereas with us it’s always been about the music and doing everything on our own terms. Desolation Sounds is a huge ‘Hello, we’re back!’ and it’s also a huge ‘Fuck you’ in terms of us standing apart from our peers.”

By his own admission, when it came to writing the music for Desolation Sounds, Barnard, the quartet’s creative fulcrum, actively sought to distance himself from current rock trends. The guitarist blocked out punk and hardcore releases in 2014, immersing himself instead in off-kilter television shows (True Detective, Twin Peaks, Fargo) and the writings of Aleister Crowley for inspiration: the aim, he says, was “to draw upon that unsettling ambience to create an album that balances brutality and beauty in new and challenging ways.” Even a cursory listen to Gallows album number four – recorded by longtime friend Steve Sears (Hang The Bastard/Krokodil) at Titan Studios in Watford – will provide ample evidence that in this mission, Barnard excelled. From the scorched earth catharsis of Bonfire Season to the stark widescreen desolation of Cease To Exist (“If I told you this was killing me, would you stop?”) and the ‘we-will-not-be-beaten-down’ defiance of Swansong, it’s a powerful, expansive collection which redraws the boundaries of the Gallows sound and opens up new horizons for a band who have always challenged their own creatively restless urges.

“We’re not looking to dent the charts or tour the world over and over with this record,” Barnard candidly admits. “What’s important to us now is to have people realise that there’s more to us than just heavy music. I sometimes feel that our bloodymindedness confuses and scares people, but from the start we’ve always forced people to have an opinion on us, for good or bad. Desolation Sounds is the most selfish record Gallows have done, because we’re writing purely to please ourselves, but I also happen to think it’s the best record we’ve ever done.”

Ask Wade MacNeil for his objectives with Desolation Sounds (named after a bleak but beautiful stretch of water in his native Canada) and the guitarist will answer “we just want to ruin some more young lives.”

“It’s almost like we’re at a point in culture similar to the end of the ‘80s again,” he muses, “with people celebrating excess and stupidity and utterly meaningless, substance-free shit. I feel like we’re reaching critical mass with this. And I really fucking hope that’s some really angry young kids making a record in their basement somewhere that are going to blow all this shit up. If the songs we write can maybe light a fuse for that, that’s all we can hope for.”

Welcome back gentlemen: do your worst.