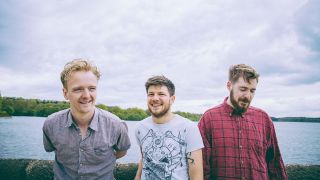 Gather around, new music fans, for this week we get to grips with the brand new sounds of Leeds alt.rock trio Bearfoot Beware. Specialising in the sorts of jazzy post-hardcore that dominated Dischord Records in the 90s, they’re the latest in a long line of exciting new bands to spring from Leeds’ vibrant musical underground.

We catch up with the band to find out all about them, below.

We are Bearfoot Beware from Leeds, Yorkshire. In short we are: Tom Bradley - Guitar and vocals, Ric Vowden - Bass and vocals, Mike Osborne - Drums and woodblock.

Ric: Me and Tom met through university and started a band together. Mike came along a few years later, after a drummer stopped returning our calls, and we became Bearfoot Beware. Originally Tom was going to sing temporarily as we had booked gigs without really being ready – classic rookie move. Tom stuck on after no-one was interested and now here we are.

Mike: We came to the table with quite an eclectic taste in music. At the time I mostly listened to a mix of electronic artists and hardcore, Ric was into math rock and Tom listened to indie/punk. We just knew we wanted to be in a band and that it’d be fun to work out where it could go. At the time, it felt like it was the only good thing to do with our lives.

Ric: We try and treat every show as if it was the last, and think there’s little point sitting in a van for hours to get to a show and not work.

Tom: We operate in the DIY scene so everything you see and hear mostly comes from us, or is funded off our own backs – or more recently alongside our new label Superstar Destroyer. Too many times we’ve seen other bands take themselves too seriously and not take their music and performance seriously enough.

What’s the story behind the new album Sea Magnolia – how did it come together?

Tom: Sea Magnolia is just a next stage for us. We’ve been progressing into heavier territory for a while. I think it’s what we always wanted but it took time to appear. Maybe with older age your riffs and vocal chords ripen, or maybe we’re just listening to different stuff now. I think all our pals in the local noise rock scene and down at CHUNK have influenced us too. We soaked it all up like a sponge.

Mike: Leaving Tom recording guitars in a room filled with distorted amps for a few hours to the point he was disorientated, deaf and delusional. Good/bad vibrations whichever way you want to look at it. Sounded bloody mint though.

Ric: Sea Magnolia, it’s not like anything we’ve really done before but it has everything we want from a song: energy, dynamics, a hook and that pretentious noisy bit at the end.

Tom: The urge to go out see a band – our band – buy merch, meet people, have fun, and to quote Garth from Wayne’s World, ‘’live in the now’’.

Tom: We played what was meant to be our last gig on a European tour at a squat in Maastricht called Landbouwbelang – the place was amazing and people should check it out. We needed to be in Leeds, 799km away, as Mike had work the next day at 6am, but were offered money to play a gig in Brussels at 10pm. Got there in plenty of time and it ended up being a sold out all-dayer punk festival. Great crowd but we had to leave the minute we finished to catch a train and drive (Ric and I do the driving) all the way back to Leeds. Mike got dropped off at work just in the nick of time, and neither Ric nor I could string a sentence together for days out of exhaustion. It sounds like a bad time but it was great. Character building, some would say.

Ric: We’ve never seen ourselves live, but we always try and deliver at every show, no matter what. I imagine you can expect a bit of crazy mixed with a lot of fun, and for people who’ve never listened to our music before, a load of unpredictability. If it’s a big show we might wheel out the firework display, backing dancers and a male voice choir/brass band (depending on where it is in the country) backing us up.

Tom: Getting this album released and touring it to death. We wish we could go to North America, bands like Pile and Ought have told us we’d do really well out there but it’s unrealistic at the moment. The visas are extortionate and it really makes me think how much this imbalance affects the British music industry (with the prevalence of North American music in Britain). But mainland Europe is definitely on the cards again!

Catch Bearfoot Beware on tour at one of the dates below:

New Band Of The Week: The Pearl Harts