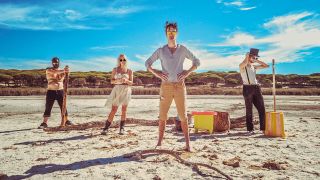 Every now and again, a band comes along who really just defy categorisation. One such band is London quartet Fjokra. Described by the bloke from Kaiser Chiefs as “sex music for metallers,” and finding a fan in the shape of Duran Duran bassist John Taylor, their blend of alt.rock takes its cues from a dizzyingly diverse range of sounds, including ragga, prog rock, nu-metal, 90s hip hop and pretty much everything else in between.

We chat with band leader Fiachra Mac Oireachtai to find out more about the band, their sound and what they have lined up for next.

“Fjokra is the name that I took when I started making this music in the studio. So for the live shows when I am joined by the band, we collectively go under the name Fjokra. Annie Bea (London) is on vocals and percussion, Freddie Draper (Bristol) on bass and vocals, Jax Richardson (Kent) on guitar and vocals and Filippo Gali (Tuscany) on drums and electronics. On stage I mostly sing and also play some keyboards and guitar. I’m from Dublin.”

“I have always been completely addicted to playing live. So when I started to write and record this music, it was a no-brainer for me to get a great live band together in order to bring it to the stage. My most influential live performers are people like Freddie Mercury, Prince, Mike Patton and Bjork.”

What’s the story behind your name, and how do you pronounce it?

“Fee-ock-rah. It is a Scandanavian spelling of an Irish name.”

“I believe that we all have a genuine disregard for genre definitions and musical pigeon-holing. Once you realise that pretty much every style of music is related in some way, it makes for a pretty fun and boundary-free creative process. Also, our mommies told us that we are special, so that counts for something too.”

What’s the story behind the new single, and how did it come together?

“Evening Lights came about when I was in Taiwan. I was walking down a busy neon-lit street at night and the chorus came into my head. The verses came later when I was back in London. I think it was a St. Vincent track that triggered the idea for the groove in the verses.”

What were your key influences when writing it, and what drew you to the themes it covers?

“I’m not sure if there is a musical artist or band that initially inspired the chorus line, but I was listening to my good friends’ band Swiss Lips at the time so I guess that’s where the electro/synth/pop vibe came from. As I said before, I think it was a St. Vincent song that kick-started the verse groove. The synth solo in the middle is a 100% undiluted, full-fat, non-pasteurised tribute to Prince.”

What’s your favourite story/anecdote from recording the single?

“Before the synth solo if you listen closely you can hear a pitched-up voice saying “Let me make you breakfast, baby”. I did a whole bunch of ad libs for this section in the vocal booth trying out different euphemistic lines that actually meant pretty boring things. I think “Let me do your laundry” was another one…”

What, in your opinion, is the stand-out track you’ve released so far?

“That’s a weird one to answer! I’m really proud of everything that’s been released so far and really happy that people are digging it. Once you release a track, it doesn’t belong to you anymore. It’s up to the rest of the world to decide what they want to think of and what they want do with it. So I’m just enjoying being back in the studio and looking ahead to the new sounds that are happening there.”

What do you hope people will take away from the single, and your music in general?

“The only thing that I hope for when creating a song is that at least one person will listen to it and say ‘I’ve not heard something quite like this before but it’s making me want to dance my face off’.”

“That is really hard to answer. But at this moment in time, shooting the video for Bang On The Door in Portugal earlier this year was extremely fun.”

If you could choose, who would you most like to tour with in future?

What are you most looking forward to about the future?

Catch Fjokra on tour this week:

New Band Of The Week: The Pearl Harts