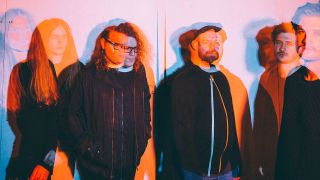 “I used to do a lot of musical theatre,” Em Foster tells TeamRock from her home in Brighton. Foster – who is chief vocalist, guitarist and songwriter for Watford-based indie-punks Nervus – joins us via Skype on the cusp of the release of Everything Dies, the band’s second album, and she’s in high spirits. Right now, she’s regaling us with tales of how she cut her teeth in music in the first place. “I was in productions of Oliver and Bugsy Malone and that kind of thing, but I also really wanted to be the guitarist in Queen. I used to have daydreams about playing the solo from We Will Rock You at a school talent competition, where everyone would think ‘Wow, they’re so good at guitar’. It never happened, and I still couldn’t play that now, but that’s where it started.”

Foster’s musical career soon took a turn likely to sound familiar to anyone who found themselves growing up in a late 90s alternative scene. “I then ended up in a ska band, so it’s a tragic story, really,” she laughs. “That band was called The B-Team, and then I was in a band called Dexter’s Fish, which had a super-ska name. But the singer from Dexter’s Fish, Dan McDougal, plays drums for Liam Gallagher, and he’s playing the Brit Awards this year… So, don’t let your dark ska past ever get you down, is the message I’d like to get across.”

But from these humble, brass-inflected beginnings, Foster – flanked by keyboard player Paul Etienne, bassist Karl Woods and drummer Jack Kenny – eventually grew into Nervus. It was a project which was honest, bold and deeply infectious, and one which allowed Foster to explore songwriting in a way she had never had done before. “Nervus was the first time I’d written songs without there being this veneer of it being a joke – before it’d been, well, if you don’t like it, it doesn’t matter because it’s a joke,” she says. “Nervus was the first time I’d allowed myself to be vulnerable in that sense. I was experimenting a lot with how I wrote songs and messing around with structures. Lyrically, it was a lot to do with coming to terms with myself, which I hadn’t done prior to that, either.”

This “coming to terms” references the fact that in 2016, backed up by the release of Nervus’ first album Permanent Rainbow and an in-depth interview in The Independent, Foster came out as a trans woman. “In terms of coming out, I thought I could get it all done by whacking everything in an interview with The Independent and that would be that,” says Foster. “But I then learnt that you have to keep on coming out forever, and ever, and ever, over again, so realistically it made no difference at all. But at the time, I thought, ‘This is a good way to rip the plaster off and get it over and done with’. But it’s quite anxiety-making, being open about it and talking about it. It puts you in a position where you could potentially end up the target of shit-talking dickheads. But, when that happens, you just press block and it’s alright, really.”

Permanent Rainbow was a remarkable release for a number of reasons, not least when you learn that thanks to a simple studio mishap, it almost never got released at all. “Recording that album was a harrowing process, in terms of the fact I’d never taken on a project of that size before when it came to recording, mixing and mastering it. I didn’t necessarily know anything about those things, really. I borrowed Titan Studios, which Steve Sears owns, and all his equipment and just blagged it.”

“It came out alright in the end, but then I dropped the hard drive on the floor after we recorded the album and completely corrupted the whole thing. It was all gone, and I took it to a hard drive specialist and he said that it would cost £1000 to recover the data, and even then it wasn’t guaranteed that it would be okay. So, we had to re-record the album in one day, so we did all of the album in 22 hours.”

“I remember having to call up the other members of the band and be like ‘Ummm… I dropped it all on the floor, it’s gone forever, so we have to do it again’,” laughs Foster. “They loved me… No. They were considerably irritated, but they’re good at hiding it, or at least biting their tongues. ‘It’s a blessing in disguise!’ – that’s what we all kept on saying, over and over again, like some kind of warped mantra as we all cried over our equipment in the studio.”

If Permanent Rainbow was Nervus’ mission statement, new album Everything Dies is the successor it deserves. Focused and direct, it uses a blend of glorious, catchy hooks and intelligent songwriting to deliver its pertinent and personal message. “In terms of songs and as a band, we definitely weren’t a band on Permanent Rainbow in the same way that we are a band on this album,” says Foster. “We just try to have fun, and I hope it sounds like that. We try to have fun while also delivering a very serious message, because it’s not all doom and gloom. I feel like a lot of the press we end up doing, we answer questions – or I, specifically, answer questions about myself that are very ‘sad face’. A lot of focus and attention goes on to the misery and tragedy of being trans, but in reality it’s just loads of fun but with people being a prick to you on the internet.”

“The oppressive shit that people go through is very real, but you’ve still got to be able to have fun and enjoy yourself,” says Foster. “There’s so much focus on trans women being victims, and they are. But I think that a lot of the ways trans women are portrayed in media is that they have no agency in terms of their stories. Those stories are constantly like ‘Oh, it’s tragic’. But realistically, their lives weren’t tragic; their deaths were tragic.”

“A lot of the time I feel like media surrounding trans women robs them of their lives. Most trans women I know have incredible senses of humour and an appreciation of life greater than most of the people I’ve ever met in my life. That gets boiled down to ‘Oh, it’s sad, isn’t it? Poor them.’ And I just think… fuck off.”

The new album came at a time when Foster’s life was changing in many ways. “I wrote it all when I was living in Brighton and it was basically me trying to chronicle life as a trans woman,” she says. “You can end up really dwelling on statistics and the negative aspects of stuff. Realistically it was me trying to deal with those negative aspects in a positive way and feel that anger but turn it into something fun.”

“I felt like because I came out and moved straight down to Brighton, that may have left a lot of people – especially my close friends – in the dark as to what was going on, so making the new album was an excuse to keep things going and still be in contact with those people. I didn’t even speak to the rest of the band about what the lyrics were about for the first album until a little while after we’d been playing them together. I felt a little bit guilty about that, but also I didn’t know really how to approach talking to people about it.”

“It was cool when we were writing the second album to be able to be more open in my lyrics. When we were sharing those songs, and turning them into the songs that you hear on the album as a band, it was almost like a way to reconnect with those guys who I consider my best friends, because I’d thrown them a curveball… I’d thrown everyone in my life a bit of a curveball at that point. So making the album was partly that, but mostly turning my anger and my disappointment at society, and in some respects myself, into something constructive and positive.”

So with the album set to be unleashed on the public within a matter of days, what are Foster’s hopes for it once it’s out in the wild? “I hope it makes people who feel afraid of being who they are feel less afraid of being who they are,” she says. “That’s not to say that you shouldn’t be afraid, because there’s still massive pitfalls, sometimes everyone’s a prick and it’s not easy. But I hope it empowers anyone who needs to feel empowered for a bit, and that they can put it on and feel empowered, feel that anger and also feel like it’s alright, really.” She pauses, then laughs. “I also hope they think it’s fucking sick.”

Nervus’ new album, Everything Dies, will be available on 9 March via Big Scary Monsters