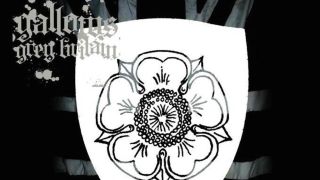 You know that thing where you type out a text message or tweet and keep deleting it because it doesn’t quite sum up how you feel quite accurately enough? Trying to sum up just what makes a punk rock landmark like Grey Britain a world beater has led me down that particular cul de sac. Partly because it’s my favourite album of the 21st century but mainly because it has it all and finding where to start is a near impossibility.

Let’s start with it’s authenticity. From the mean and moody orchestrated intro and lyrical content (“Grey Britain is burning down/the Queen is dead/set alight to the flag we used to fly…”), Grey Britain offers a look at the country from a grimier and altogether angrier outlook. This isn’t focusing on the banality of the country like Suede and Blur have in the past or finding beauty in the mundane like Morrissey. Gallows, and in particular their wide-eyed ringleader Frank Carter, were shining a light on a country where you can cop a beating just for looking at someone the wrong way, where the only way to deal with day to day life is getting fuelled up on beer and mayhem and there is an impossibly dark underbelly on our isle, where even the kids’ TV presenters you sought refuge in as a child end up being not quite what they seem. No clever metaphors or subtext. The country is fucked and here’s why, direct from the streets and with all of the impact of a Stella glass to the head.

When you have a narrative that takes absolutely no prisoners, it’s imperative that the music does the same. Punk rock being played with such vigour and excitement can’t be replicated in Pro Tools, there’s a pace and power and untameable urgency to everything that makes you feel like you’re holding on for dear life the whole way through. There are larger than life riffs that can go head-to-head with the best of metal, the musicianship for a punk album is off the scale (drummer Lee Barrett never steps out of beast mode throughout) and the song writing on the likes of the sinister and indignant Misery and the angular aggression on The Great Forgiver take a meaty dump on the notion that punk rock has no craft and is nothing but piss and vinegar. Bullshit. Take this journey through orchestral passages, avant-garde guest appearances (thank you Biffy Clyro’s Simon Neil) and two-part tracks that take in mournful acoustic passages and a slab of metallic riffage that wouldn’t be out of place on a Mastodon record and tell me punk rock is nothing but meat and potatoes.

Five years on from its release, Grey Britain’s themes and points ring truer than ever. Its edges haven’t been blunted whatsoever and it still pumps the blood for more reason than your writer being a bit of a LDN wide-boy who likes shouting “London is the reason” at the top of his lungs. Don’t listen to people that say Gallows aren’t the same without Carter, their talismanic former frontman, it’s nonsense and the band’s consequent releases and live shows have all been of the highest standard. Close your eyes and pretend Pure Love never happened and that the “I’m so sick of singing about hate, it’s never going to change a thing” line never made an attempt to dull this album’s vitality. Grey Britain is an album that will never feel caged or dated. The work of a band fearless enough to let their creativity run rampant and united on all fronts cannot and should not ever go out of fashion. Put simply, your record collection is empty without this album in it.