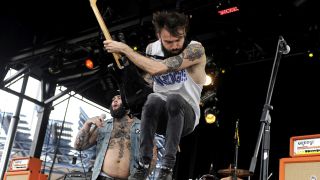 Guitarist Laurent Barnard has been destroying eardrums with Gallows for over a decade now. Here, he selects the five guitarists whose unique style helped blaze a trail for modern punk…

If ever there was a punk rock band whose legacy will overshadow their commercial success then it’s Washington DC’s Bad Brains. These four African-American Rastafarians bucked the scene’s trend of sacrificing talent for passion without losing an ounce of their raw energy. In fact they proved to be untouchable both live and on record. Gary ‘Dr Know’ Miller’s blend of lightning fast chord changes and jazzy guitar chops would influence acts like the Red Hot Chili Peppers, Dinosaur Jr, Beastie Boys and pretty much every hardcore band to follow. Widely recognised as a technical player, Dr Know introduced elements of fusion, metal, funk and reggae to create Bad Brain’s thrilling sound.

John Reis, AKA Speedo, AKA Slasher, AKA The Swami, has built an illustrious career transversing different genres. One moment he’s on MTV handling puppies, the other designing dissonant musical landscapes, all the while remaining an important figurehead in San Diego’s DIY punk scene. His guitar style could easily be defined by his involvement in the band Hot Snakes, a mixture of Rocket From The Crypt’s up-tempo rock’n’roll and Drive Like Jehu’s angular spontaneity. Never one to rest on his musical laurels, last year Reis released a surf rock record simply called Modern Surf Classics with The Blind Shake.

Thank Lucifer for San Francisco’s Dead Kennedys. Their arrival in 1978 restablished punk’s ability to shock when it looked like the scene had witnessed it all. East Bay Ray’s love of psychedelia and film scores shone through in his guitar playing and formed a huge part of Dead Kennedys’ inventive sound. Just listen to the guitars that introduce Holiday In Cambodia; part space rock, part spy movie, part surf, a rambunctious display of technical prowess and imagination that somehow works when on paper it shouldn’t. Despite well publicised legal feuds later in the band’s career, East Bay Ray’s colourful guitar work coupled with Jello Biafra’s scandalous lyrics saw Dead Kennedys kick their way into the hardcore history books.