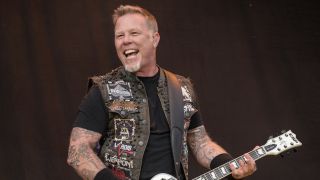 As the frontman of Metallica, James Hetfield has spent the last 35 years travelling the globe as the leader of the biggest heavy metal band of them all. And yet a tough upbringing in a religious family means that he’s never forgotten his humble roots, or the affect it had on him. Here he looks back on his formative years, remembers teaming up with Lars and considers what Cliff Burton would have made of the direction they took in the 90s…

“Yes, two older half-brothers, Chris and Dave, and a younger sister, Deanna. My mom’s second husband was my dad. It was pretty difficult. My younger sister, we would fight like cats and dogs and then when [my] parents came home we’d help each other clean up the mess, and cover for each other. But my older brothers, they were pretty much a generation apart and unfortunately it wasn’t as bonding. They were not quite old enough to tell me what to do and not young enough to understand what I wanted to hear, so it was kind of an awkward middle position there.”

“I was a pretty average student. Pretty quiet, pretty reserved, just kind of get it done and then go home and have fun and play. Loved sports.”

“It didn’t impact on the school. It wasn’t like going to a Catholic school. It certainly did affect me though – more than my sister and my brothers, I took it a little more personally. Our parents didn’t take us to the doctor. We were basically relying on the spiritual power of the religion to heal us or to shield us from being sick or injured. And so at school I wasn’t allowed to sit through health class, to learn about the body, to learn about illnesses and things like that. And, say, I’m trying out for the football team [and] you have to get a physical, to get a doctor’s note, I’d have to go and explain to the coach that, you know, our religion says this. So I felt really like an outcast, and, you know, kids would laugh about it. When health class would begin, I would be standing in the hallway, which was basically a form of punishment in other aspects. Everyone who walked by would look at me like I’d been some criminal of sorts, you know?”

“Yeah, I believe so. It helped me carve my own path, and even the spiritual part of it, when you’re a kid you can’t really grasp the concept of spirituality, and for me not going to the doctor was strange. All I saw was the people in the church that had broken bones and they were healing wrong. It didn’t make any sense to me. But also it helped me embrace the spiritual concept later on, you know, and actually see the power in that, along with the knowledge of doctors these days, so it did help me with my concept of spirituality.”

“Yeah. My mom had seen me over at a friend’s house just kind of start bashing on the piano, and she thought, ‘Oh, he’s gonna be a musician. Okay, we’ll sign him up for piano.’ I did that for a couple of years and it was really a bit of a turn-off because it was learning classical pieces, stuff that I wasn’t listening to on the radio, you know? I remember it was at an older woman’s house and the cookies at the end was the big deal. But I am so glad it was somewhat forced upon me, because the act of the left and right hand doing different things, and also singing at the same time, it gave me some inkling of what I do now. Singing and playing is somewhat easier than it probably would have been if I hadn’t had piano [lessons].”

“No. Obsession was a high school band and we would basically just jam in my friend’s garage, doing cover songs. We’d do Thin Lizzy, Black Sabbath, some Robin Trower, some Led Zeppelin… And we’d do a couple of parties; that was pretty much it. I don’t remember learning guitar, ha ha ha! I just remember picking up a guitar for the first time and going, ‘How do they make all these noises?’”

“It was definitely about music. I had never seen him or heard of him before that. I had been in this band, Obsession, [and] I had brought an original song to play and none of them liked it so that’s when I basically kind of said goodbye to them. When I met Lars I was jamming with this other guy in high school, forming this band, Phantom Lord. [Lars was into] some of the bands we had gotten turned on to at the time – Saxon, Judas Priest, things like the Scorpions. Some of the more popular metal bands that had made it over into the States.”

“We’re pretty much the opposite at everything – except when we play music together. You know, whenever we take a break, we’ll go away for six months from each other and come back together and start talking about where our lives have taken us, and it’s, ‘Oh, I’ve been listening to this and discovered this.’ ‘Wow, me too!’ So it’s kind of… parallels, in one way and then complete opposites in the other. That is the beauty of it. That has helped us battle through a lot of things together but given the extreme differences there’s lots of different viewpoints you can learn and take from.”

“Absolutely correct. Besides introducing us to more music theory, he was the most schooled of any of us, he had gone to junior college to learn some things about music, and taught us quite a few things. When Lars and I had seen him play with [Cliff’s previous band] Trauma, our jaws fell onto the floor, and we said, ‘We’ve got to get this guy.’ He and I aligned a lot closer as friends, as far as our activities, music styles that we liked, bands that we liked, politically, views on the world, we were pretty parallel on that wavelength. But, yeah, he had such a character to himself, and it was a very strong personality, he did creep into all of us eventually. And he’s missed greatly by this guy sitting here now.”

“Well, I certainly would have thought there would have been some resistance, for sure. I think The Black Album was a great album and I appreciate the fact that we did have the balls to do that and have [producer] Bob Rock to work with us. It had to be, it really did. You know, when I go back and I listen to [previous album] …And Justice For All, it couldn’t have stayed on that path. We needed to bring in another set of trusted ears. [But] I think Cliff would have probably interjected some different stuff, getting his bass heard and some more musically challenging things, probably. I would certainly think that the Load and Re-Load [era], I would have had an ally that was very against it all – the reinvention or the U2 version of Metallica.”

“No, no, not at all. There’s some great, great songs on there but my opinion is that all of the imagery and stuff like that was not necessary. And the amount of songs that were written was… it diluted the potency of the poison of Metallica. And I think Cliff would have agreed with that.”

“Well, I’m not sure. For me, St Anger kind of stands alone. It’s more of a statement than an album. It’s more of the soundtrack to the movie, in a way. There’s some really interesting and cool riffs, some great songs on there. But sonically it sounds fragmented, which is exactly where we were at the point. But in that fragmentation it brought us together. So it was a very necessary piece of the puzzle to get us where we are today.”

“I think it’s a combination of all that. I think Bob… we had gotten too comfortable with each other, especially going through all of the emotional draining of St Anger. It was good to move on. Rick Rubin is the exact opposite of Bob Rock. And the fact that we were able to sit down and write ourselves, do things for ourselves without Rick Rubin babysitting, that was where we were able to try our wings out again and fly as a band. So it was the right thing at the right time. Not to talk bad about Bob whatsoever, because he’s taken us places that we never would have gone before. We’ve learned so much from him.”

“Ha ha ha! Well, that’s a great question. I think every person that goes through something like what I’ve gone through very much worries about that. But the creativity, it will come from where it has to come from. Anything can be digested and be spit out Metallica-like. I’m not gonna start writing about picking flowers now. When I’m happy I’m writing the heaviest riff possible. Being happy is not overrated. But also, there will always be anger issues with me, no matter what. There always seems to be another cool piece of the puzzle revealed.”

The Metallica 1980s Quiz: how well do you know their early years?